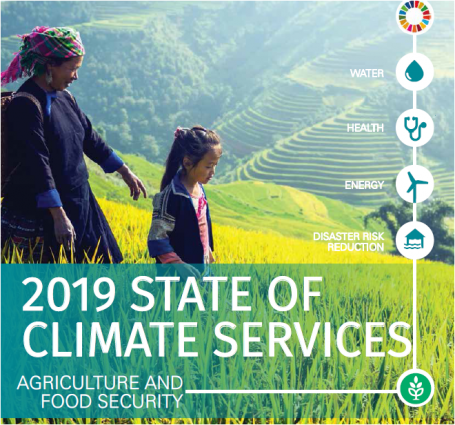 Madrid, 3 December 2019 - Weather and climate services are vital for sustainable development and climate change adaptation. The benefits of investment greatly outweigh the cost, and yet the capacity to deliver and access these services is uneven and inadequate, according to a new report.

An inaugural report on the State of Climate Services highlights progress, opportunities and challenges in rolling out climate services such as seasonal forecasts, drought advisories and fire danger indices. The report focuses on agriculture and food security, one of countries’ top climate change adaptation priorities and given that progress towards tackling global hunger has recently been reversed.

“Climate information and associated services have demonstrably led to improved agricultural and food security outcomes and benefits for stakeholders in the sector,” says the report, which provides case studies from around the globe.

“The capacities to deliver and access these services are highly uneven across regions and countries, however. The challenge is to strengthen the global-regional-national hydro-meteorological system needed to operationalize and deliver these products and services at country level, particularly in developing countries, so that everybody benefits,” it says.

Climate services investments overall have a cost benefit ratio of one to 10. The evidence suggests that the benefits of investing systematically in strengthening the operational global regional-national hydrometeorological system needed for climate services outweigh the costs by about 80 to one.

The need for climate adaptation, informed by science, is now more urgent than ever.

“Global temperature has already risen to 1 °C above pre-industrial levels. The time left to achieve commitments under the Paris Agreement to remain within 2 °C is quickly running out, requiring immediate action,” said WMO Secretary-General Petteri Taalas.

WMO spearheads the Global Framework for Climate Services and prepared the report in partnership with the Adaptation Fund, the CGIAR Research Program on Climate Change Agriculture and Food Security (CCAFS), the Food and Agriculture Organization of the United Nations (FAO), the Green Climate Fund (GCF), the Global Environment Facility (GEF), the Global Facility for Disaster Reduction and Recovery (GFDRR), the World Bank and the World Food Programme (WFP).

The report was launched at the UN Climate Change Conference, COP25, with several side events involving WMO and partners.

Food-insecure people are among the people hit the hardest by climate change. Over 80 % of the world’s food insecure live in degraded environments exposed to recurrent extreme events (storms, floods, drought). In a warming world, extreme climate conditions will become more frequent and severe.

One of the reasons was extreme weather and climate shocks.

A world that is 2°C warmer is likely to have 189 million more food insecure people. This is an increase of around 20% compared with today, according to WFP.

In addition, agriculture suffers 26% of the damage and loss during climate-related disasters in developing countries. In parallel with these trends, the global demand for food will increase by 50% and, in the absence of ambitious climate action, yields may decline by up to 30% by 2050 (Global Commission on Adaptation, 2019).

The report explains the role of climate services in informing decisions on when to plant and harvest, irrigate and fertilize and how to invest in drought resilient crops and livestock and more efficient irrigation systems.

Examples include information on: 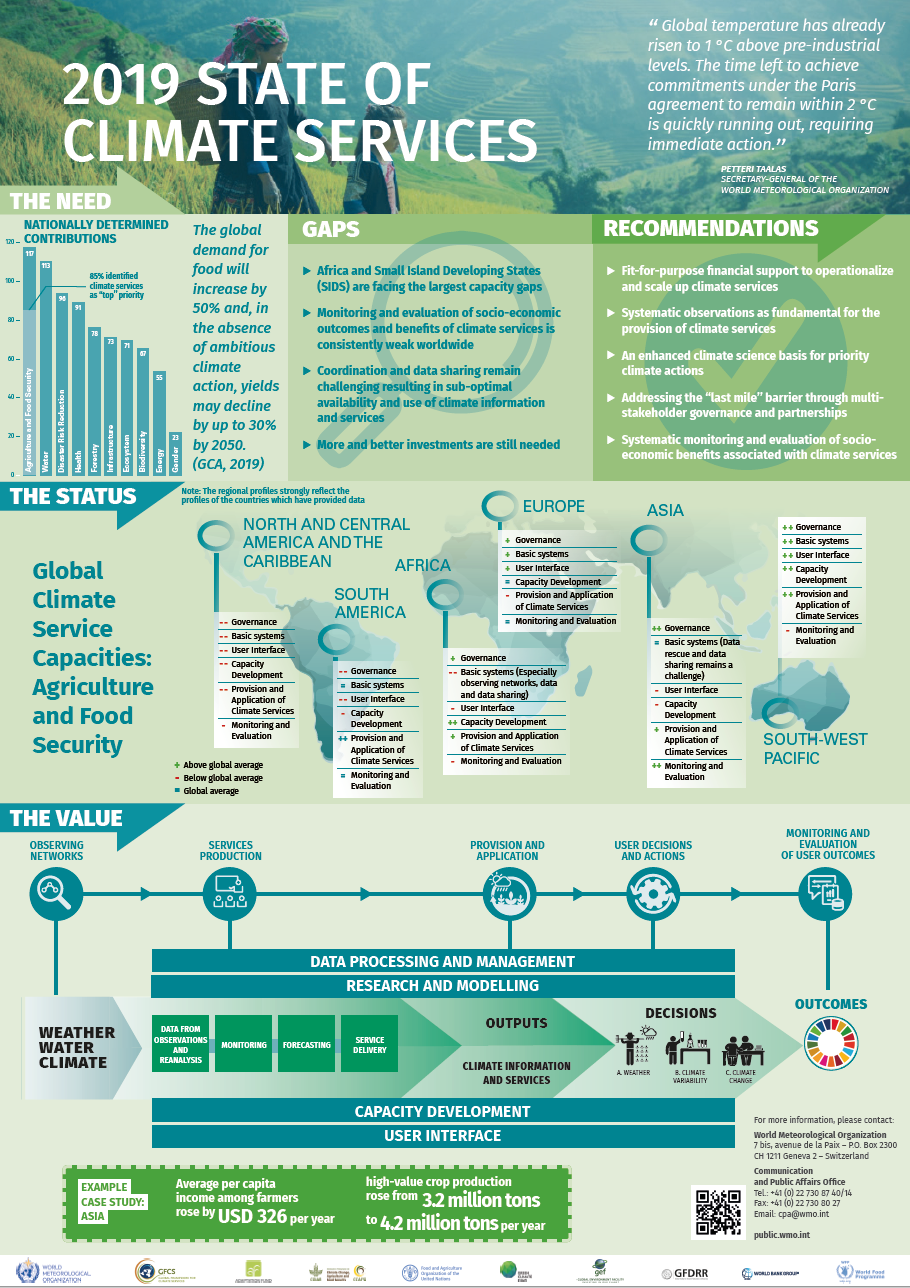 Africa: Intergovernmental Authority on Development (IGAD) Climate Prediction & Applications Centre (ICPAC) provides forecasts on seasonal rains onset anomalies in relation to the long-term average. This informs farmers concerning what crops to plant and when to plant them, movement of livestock for better foraging conditions and when to use reservoir supplies for crops. Potential benefits include higher crop yields and higher livestock weight gain.

Asia: Operational Agromet Advisory Services in India have decreased cultivation costs overall by up to 25% and, increased net returns to farmers up to 83%. The crops that benefited most are paddy, wheat, pearl millet, and fruits and vegetables. The economic benefit is estimated at USD 7.575 billion per year.

South America: North East Brazil’s Drought Monitor integrates drought information at the federal, state and municipal levels in the areas of meteorology, water resources and agriculture in a collaborative effort among different institutions. The Monitor improves drought early warning and forecasting for preparedness plans at the river basin, metropolitan region and municipality level.

North America, Central America and Caribbean: The fire danger index map from the  National Hydrological and Meteorological Service of Cuba assists farmers and foresters in deciding whether to make planned burns. Policy makers can move firefighting resources to areas at high risk of fire.

South-West Pacific: The Regional Drought Potential Advisory from the National Institute of Water and Atmospheric Research (NIWA) of New Zealand, in association with Pacific Island meteorological and hydrological services provides better early warning of drought events. This information is also an input into national drought policies.

Europe: The European Commission’s Relative Index of Pasture Productivity helps farmers  determine where their livestock should be moved or if they need supplemental feed. European policy-makers can adjust assistance to ranchers and verify impacts of drought for disaster payments.

At present more than USD 3 billion is invested in nearly 200 climate services and early warning systems projects with funding from the Adaptation Fund, the Green Climate Fund (GCF), the Global Environment Facility (GEF) and the World Bank Group.

The World Bank estimates that additional investments beyond those already programmed of up to USD 2 billion are needed to strengthen NMHSs and other national institutions to be capable, and fully equipped, to deliver timely, reliable climate, weather and water information and services relevant for policy and investment decisions.

While investments have substantially increased over the past decade, more should be done to ensure the provision of high-quality climate information services for adaptation action in agriculture.

Africa and Small Island Developing States (SIDS) are facing the largest capacity gaps, especially with regards to the density of the observing network and reporting frequency of observations essential for weather and climate forecasts and services.

Overall, investments need to be more focused and holistic. Current investments are ad hoc and piecemeal and there is a need to use the resources more efficiently to strengthen the global-regional-national operational hydrometeorogical system that supports country-level service delivery more systematically and in a more integrated way. In particular, the services need to overcome the “last mile” barriers and reach farmers on the ground, according to the report. And there is a need to improve the systematic estimation and documentation of the socio-economic benefits of investments and the resulting services.