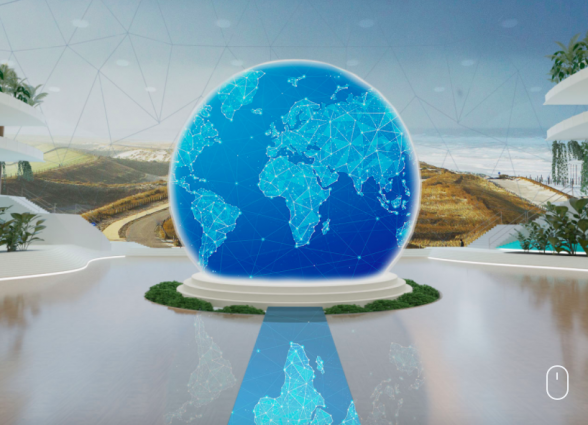 Geneva, 26 January 2021- As climate change leads to an increase in the frequency and intensity of extreme weather, the need for effective early warnings and early action took centre stage at the Climate Adaptation Summit on 25-26 January.

The online event, hosted by the Netherlands, convened global leaders and local stakeholders. It launched a comprehensive Adaptation Action Agenda and heard of new financial pledges to initiatives to make the world more resilient to the effects of climate change.

“According to the World Meteorological Organization, there have been more than 11,000 disasters due to weather, climate and water-related hazards over the past 50 years, at a cost of some US$ 3.6 trillion,” United Nations Secretary-General  Antonio Guterres told the opening session.

“Extreme weather and climate-related hazards have also killed more than 410,000 people in the past decade, the vast majority in low and lower middle-income countries. That is why I have called for a breakthrough on adaptation and resilience,” he said.

Although the global death toll has fallen, the poor remain disproportionately exposed. 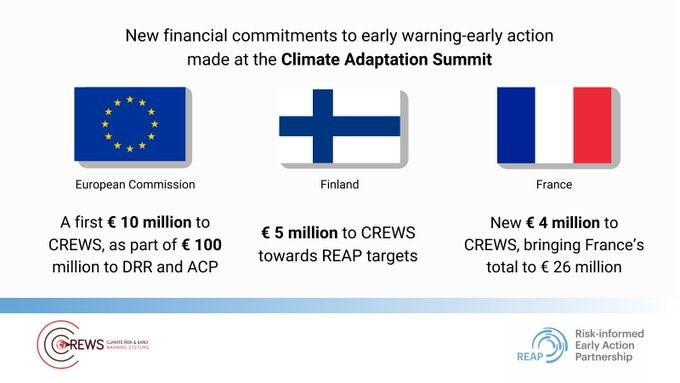 A special Anchoring Event on Disaster Risk Management – one of the action themes of the Climate Adaptation Summit - addressed the urgency of greater investment in early warning systems. It also focussed on the need to translate early warnings into risk-informed early action in advance of hazards striking.

The event, Getting ahead of the climate curve: Investing in early warning and early action, was co-hosted by the Risk-informed Early Action Partnership (REAP), the World Meteorological Organization (WMO) through the Climate Risk and Early Warning Systems (CREWS) initiative and the International Federation of Red Cross and Red Crescent Societies (IFRC). It featured leaders and decision-makers, including from countries on the frontline of climate change.

The event heard of new financial commitments from France, Finland and the European Commission to CREWS to build early warning systems capacity. Luxembourg Minister for Climate, Environment and Sustainable Development Carole Dieschbourg presented Luxembourg’s climate finance strategy that is doubling over the next five years, with support to the most vulnerable countries, such as small island developing states. 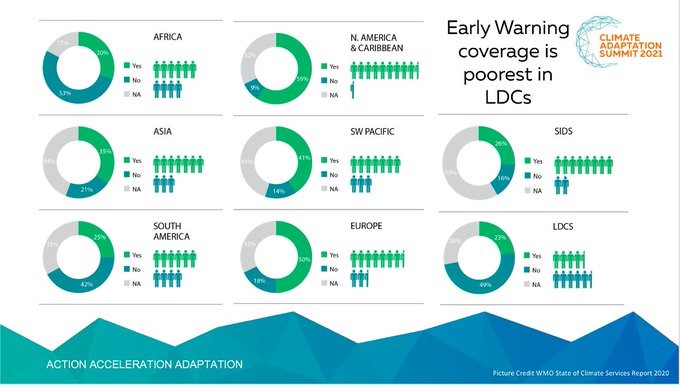 Early warning systems are a highly effective way of adapting to climate change and building resilience to extreme weather. It is estimated that investments in these services can save lives and assets worth at least ten times their cost.

Only 40% of WMO Members report having an early warning system in place. Furthermore, the WMO State of Climate Services 2020 report showed that there is a global incapacity for translating early warnings into early action.

“There are new levels of awareness and political commitment at the highest levels to tackle the impacts of climate change. Early warning systems and risk-informed action is one of the most effective ways to adapt to climate change and to reduce the number of casualties and reduce economic losses from extreme events,” says WMO Secretary-General Prof. Petteri Taalas.

“We need more impact-based forecasting to help bridge the gap between early warning and early action, by warning for not just what the weather will be, but what the weather will do,” he said. “But to provide good early warning services you need good observations. Gaps in data in Africa and some other parts of the world have a negative effect especially in data sparse areas, but also globally,” said Prof. Taalas, explaining the rationale behind a proposed Systematic Observations Financing Facility (SOFF).”

Juergen Vogele, Vice President for Sustainable Development at the World Bank, stressed the need to ramp up investments in adaptation and voiced support for SOFF.

According to the Global Commission on Adaptation, a 24-hour advance warning of a coming storm or heatwave can cut the ensuing damage by 30 percent. Expenditure of US$ 800 million on such systems in developing countries would potentially avert losses of US$3–16 billion per year.

“This is a good indication of our progress, and a sign that disaster risk reduction and climate adaptation efforts are working,” says Jagan Chapagain, IFRC Secretary General. 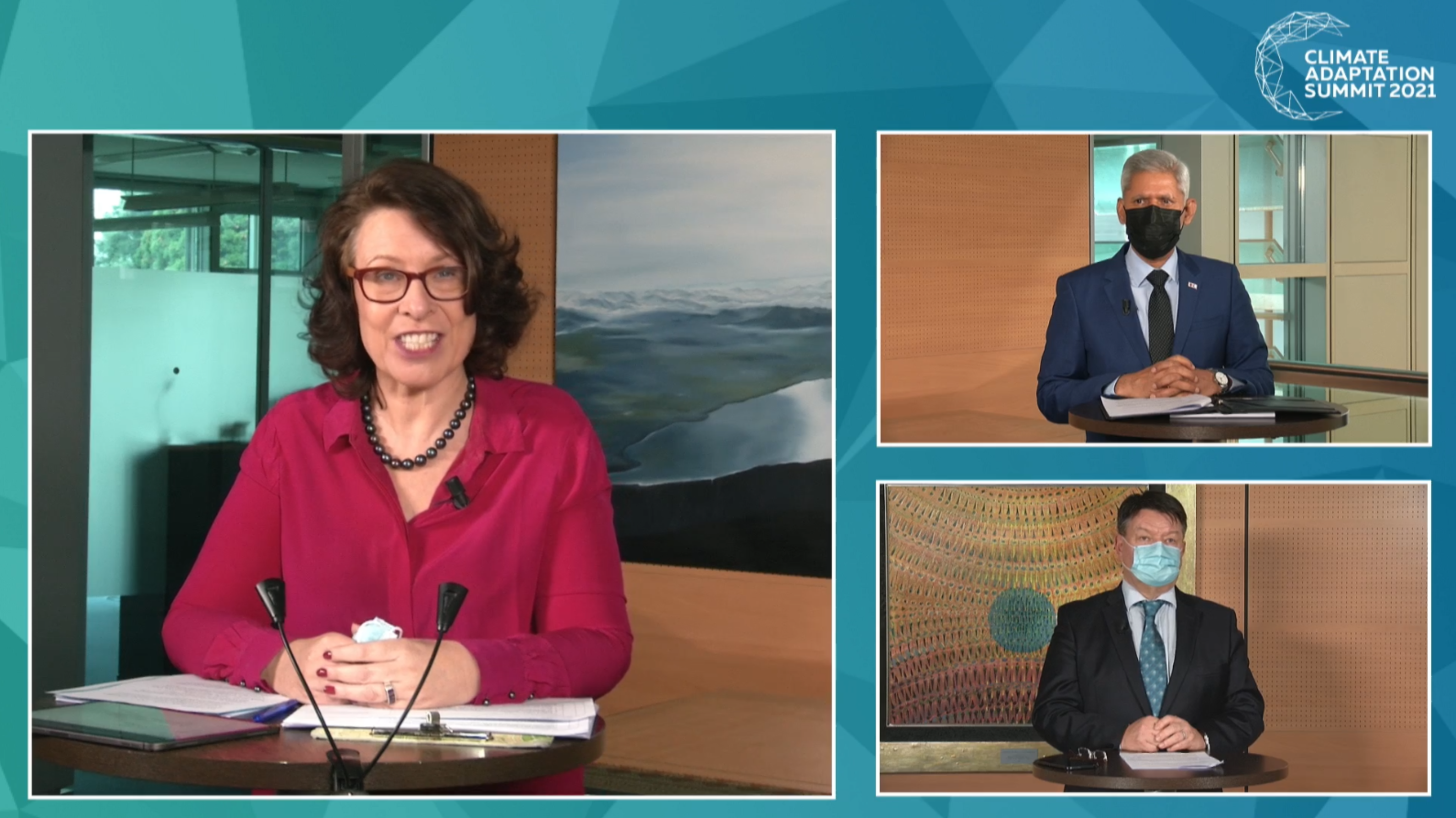 “But progress is not happening fast enough, especially in places hardest hit by climate change. Most people who have been killed or are directly affected by climate-related disasters live in low and lower/middle-income countries. As extreme weather events increase, we must prioritize support to people most exposed and most vulnerable to climate hazards and stresses, even if they are the hardest to reach,” he said. Mr Chapagain took the occasion to launch the Risk-informed Early Action Partnership’s Framework for Action, which sets out how partners aim to take risk-informed early action to scale, making 1 billion people safer from disaster in the coming years.

The event heard of effective initiatives that are improving climate resilience of vulnerable populations. One such example is the DARAJA project, meaning ‘bridge’ in Swahili.  In informal settlements in Dar es Salaam, Tanzania, and Nairobi, Kenya, DARAJA has successfully built bridges between communities and weather and climate information providers. It is financed and developed under the UK Foreign, Commonwealth & Development Office Met Office-led Weather and Climate Information Services for Africa (WISER) Programme.

In the Caribbean, 8 countries are now receiving CREWS funding and strengthening coordination against a common threat – hurricanes, said Arlene Laing from the Caribbean Meteorological Organization.

The CREWS Initiative was launched at the Paris Climate Change conference in 2015, with a target of raising US$ 100 million dollars to build resilience, especially in Least Developed Countries and Small Island Developing States,

It is estimated that an additional 10 million  people are being protected thanks to these early warnings systems, through 13 projects covering more than 50 countries in the world.

Finland's Minister for Development Cooperation and Foreign Trade, Ville Skinnari, announced that Finland was joining CREWS and  committed Euro 5 million to the Trust Fund as part of the country's scaled-up commitment to climate change adaptation. The Minister mentioned that this engagement goes towards the targets of the Risk-informed Early Action Partnership (REAP). 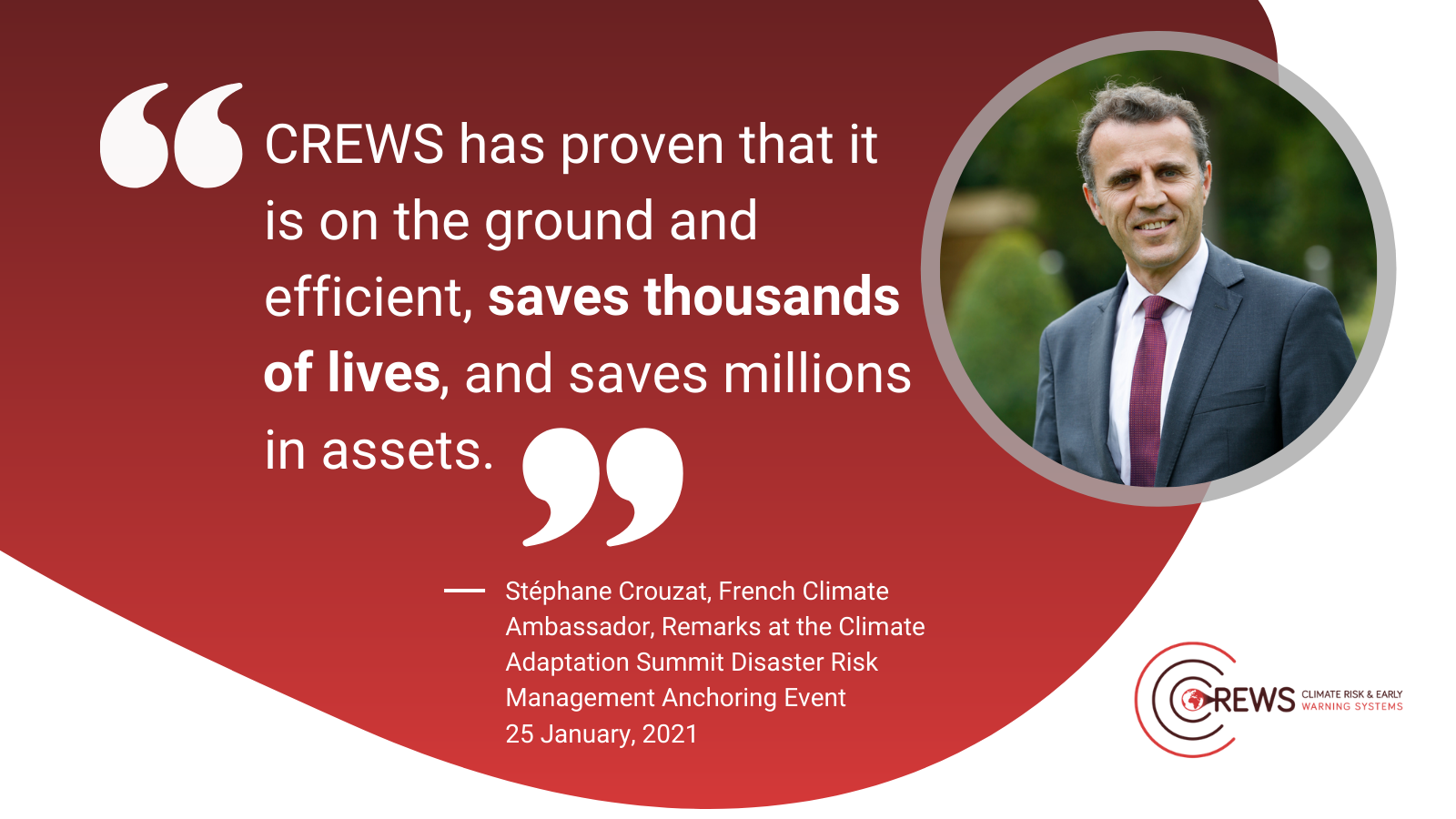 UN Special Climate envoy Selwin Hart said he was encouraged by the ambitious commitments to scale-up action on early warning and early action through CREWS and REAP, which aims to make 1 billion people safer from disasters by 2025.

“The partnership we have seen today between CREWS and REAP is exactly what is needed to help bridge the early warning to early action divide, to protect lives and livelihoods from the climate crisis,” said Mr Hart.

Climate Change adaptation will be a key platform of this  year’s UN Climate Change Conference in Glasgow, according to Anne-Marie Trevelyan, International Champion on Adaptation and Resilience & Minister for Business, Energy and Clean Growth, United Kingdom.

The Sustainable Development Goals and the Sendai Framework for Disaster Risk Reduction commit governments to substantially reduce global disaster mortality and increase access to and availability of early warning systems by 2030 and to measure their progress towards that target.

With thanks to CREWS Members