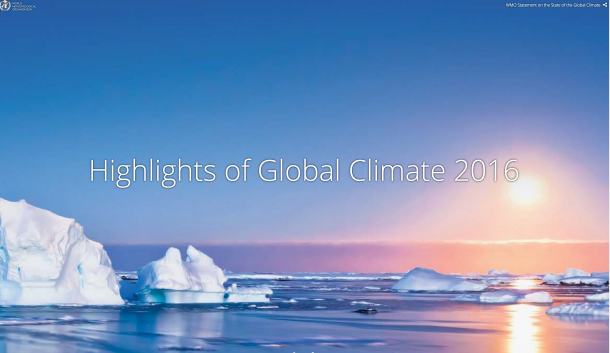 Extreme and unusual trends continue in 2017

The year 2016 made history, with a record global temperature, exceptionally low sea ice, and unabated sea level rise and ocean heat, according to the World Meteorological Organization (WMO). Extreme weather and climate conditions have continued into 2017.

WMO issued its annual statement on the State of the Global Climate ahead of World Meteorological Day on 23 March. It is based on multiple international datasets maintained independently by global climate analysis centres and information submitted by dozens of WMO Members National Meteorological and Hydrological Services and Research Institutes and is an authoritative source of reference. Because the social and economic impacts of climate change have become so important, WMO partnered with other United Nations organizations for the first time this year to include information on these impacts. WMO also prepared an interactive story map to highlight some of the main trends and events in 2016.

“This report confirms that the year 2016 was the warmest on record – a remarkable 1.1 °C above the pre-industrial period, which is 0.06 °C above the previous record set in 2015. This increase in global temperature is consistent with other changes occurring in the climate system,” said WMO Secretary-General Petteri Taalas.

“Globally averaged sea surface temperatures were also the warmest on record, global sea levels continued to rise, and Arctic sea-ice extent was well below average for most of the year,” he said.

“With levels of carbon dioxide in the atmosphere consistently breaking new records, the influence of human activities on the climate system has become more and more evident,” said Mr Taalas.

The increased power of computing tools and the availability of long term climate data have made it possible today, through attribution studies, to demonstrate clearly the existence of links between man-made climate change and many cases of high impact extreme events in particular heatwaves, he said

Each of the 16 years since 2001 has been at least 0.4 °C above the long-term average for the 1961-1990 base period, used by WMO as a reference for climate change monitoring. Global temperatures continue to be consistent with a warming trend of 0.1 °C to 0.2 °C per decade, according to the WMO report.

The very warm ocean temperatures contributed to significant coral bleaching and mortality was reported in many tropical waters, with important impacts on marine food chains, ecosystems and fisheries.

Carbon dioxide levels in the atmosphere reached the symbolic benchmark of 400 parts per millions in 2015 – the latest year for which WMO global figures are available – and will not fall below that level for many generations to come because of the long-lasting nature of CO2.

Noteworthy extreme events in 2016 included severe droughts that brought food insecurity to millions in southern and eastern Africa and Central America. Hurricane Matthew caused widespread suffering in Haiti as the first category 4 storm to make landfall since 1963, and inflicted significant economic losses in the United States of America, while heavy rains and floods affected eastern and southern Asia.

WMO has issued annual climate reports for more than 20 years and submits them  to the Conference of the Parties of the Framework Convention on Climate Change. The annual statements complement the assessments reports that the Intergovernmental Panel on Climate Change (IPCC) produces every six to seven years.

It will be presented to UN member states and climate experts at a high-level action event on Climate Change and the Sustainable Development Agenda  in New York on 23 March (World Meteorological Day) hosted by the President of the UN General Assembly Peter Thomson, with the participation of UN Secretary-General António Guterres and UNFCCC Executive Secretary Patricia Espinosa.

“The entry into force of the Paris Agreement under the UN Framework Convention on Climate Change (UNFCCC) on 4 November 2016 represents a historic landmark. It is vital that its implementation becomes a reality and that the Agreement guides the global community in addressing climate change by curbing greenhouse gases, fostering climate resilience and mainstreaming climate adaptation into national development policies,” said Mr Taalas.

“Continued investment in climate research and observations is vital if our scientific knowledge is to keep pace with the rapid rate of climate change,” said Mr Taalas.

Newly released studies, which are not included in WMO’s report, indicate that ocean heat content may have increased even more than previously reported.  Provisional data also indicates that there has been no easing in the rate of increase in atmospheric carbon dioxide concentrations.

“Even without a strong El Niño in 2017, we are seeing other remarkable changes across the planet that are challenging the limits of our understanding of the climate system. We are now in truly uncharted territory,” said World Climate Research Programme Director David Carlson.

At least three times so far this winter, the Arctic has witnessed the Polar equivalent of a heatwave, with powerful Atlantic storms driving an influx of warm, moist air. This meant that at the height of the Arctic winter and the sea ice refreezing period, there were days which were actually close to melting point. Antarctic sea ice has also been at a record low, in contrast to the trend in recent years.

Scientific research indicates that changes in the Arctic and melting sea ice is leading to a shift in wider oceanic and atmospheric circulation patterns. This is affecting weather in other parts of the world because of waves in the jet stream – the fast moving band of air which helps regulate temperatures.

In the USA alone, 11,743 warm temperature records were broken or tied in February, according to the US National Oceanic and Atmospheric Administration. Prolonged and extreme heat in January and February  affected New South Wales, southern Queensland, South Australia and northern Victoria, and saw many new temperature records.

Global temperatures in this Statement are reported using the mean of the latest versions of the three datasets: GISTEMP, NOAAGlobalTemp and HadCRUT maintained respectively  by the US National Oceanic and Atmospheric Administration (NOAA), the US National Air and Space Administration (NASA), and the Met Office Hadley Centre in collaboration with the University of East Anglia Climatic Research Unit, United Kingdom. The combined dataset extends back to 1880. In addition  ERA-Interim reanalysis of the European Center for Medium Weather Forecasting was also used in the assessment.

At the Conference of the Parties (COP) to the UNFCCC session in Marrakesh in 2016, the Subsidiary Body for Scientific and Technical Advice (SBSTA) welcomed the submissions from WMO: the Global Climate in 2011-2015 and the WMO Greenhouse Gas Bulletin. It invited WMO to provide submissions on the state of the global climate on a regular basis, as appropriate, at subsequent SBSTA sessions.

Other highlights of the 2016 Statement

2016’s warmth extended almost worldwide. Temperatures were above the 1961-90 average over the vast majority of the world’s land areas, the only significant exceptions being an area of South America centred on central Argentina, and parts of south-western Australia.

Outside the Arctic, 2016’s warmth was more notable for its consistency across the globe than for its extreme nature in individual locations.

Globally averaged sea surface temperatures in 2016 were the warmest on record. The anomalies were strongest in the early months of 2016.

Global ocean heat content was the second-highest on record after 2015. It reached new record highs in the northern hemisphere, but was cooler in the southern hemisphere.

Globally, sea level has risen by 20 cm since the start of the twentieth century, mostly due to thermal expansion of the oceans and melting of glaciers and ice caps. Global sea levels rose very strongly during the 2015/2016 El Niño, rising about 15 millimetres between November 2014 to a new record high in February 2016. This was well above the post-1993 trend of 3 to 3.5 mm per year. From February to August, sea levels remained fairly stable as the influence of the El Niño declined. Final 2016 sea level data are not yet available at the time of writing.

The seasonal maximum, of 14.52 million square kilometres on 24 March, was the lowest in the 1979-2016 satellite record. The 2016 autumn freeze-up was exceptionally slow – with sea ice extent even contracting for a few days in mid-November.

Much of southern Africa began the year in severe drought. For the second year in succession, rainfall was widely 20 to 60% below average for the summer rainy season (October to April) in 2015/2016. The World Food Programme estimating that 18.2 million people would require emergency assistance by early 2017.

Provisional figures showed 2016 was the driest on record over the Amazon Basin, and there was also significant drought in north-east Brazil.  El Niño brought drought conditions elsewhere in Central America and northern South America.

The Yangtze basin in China experienced, overall, its most significant flood season since 1999, with some tributaries experiencing record flood levels. Averaged over China as a whole, it was the wettest year on record, with national mean rainfall of 730 mm being 16% above the long-term average.

The year started with an extreme heatwave in southern Africa in the first week of January. On 7 January, it reached 42.7 °C at Pretoria and 38.9 °C at Johannesburg, both of which were 3 °C or more above the all-time records at those sites.

Extreme heat also affected South and South-East Asia in April and May, prior to the start of the summer monsoon. South-East Asia was badly affected in April. A national record of 44.6 °C was set at Mae Hong Son, Thailand, on 28 April, and 51.0 °C was observed on 19 May at Phalodi, the highest temperature on record for India.

A late-season heatwave affected many parts of western and central Europe in the first half of September. In southern Spain, 45.4 °C was recorded at Cordoba on 6 September.

The WMO Statement on the State of the Climate in 2016 is available here: 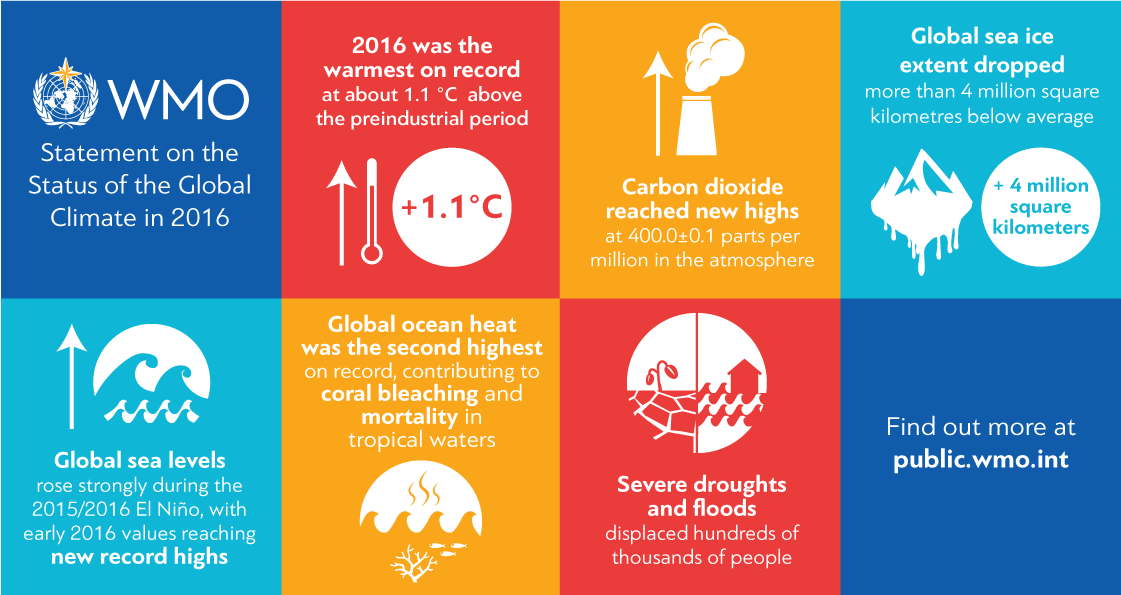