Climate change: a threat to human wellbeing and health of the planet. 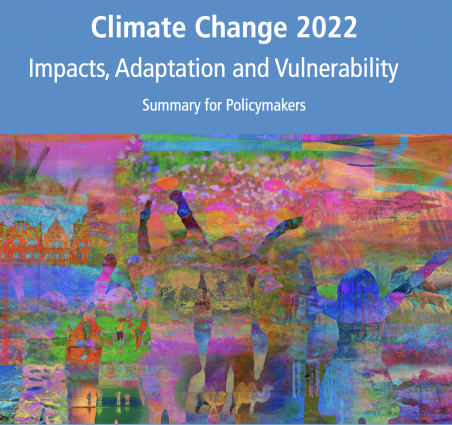 Climate change: a threat to human wellbeing and health of the planet.

Human-induced climate change is causing dangerous and widespread disruption in nature and affecting the lives of billions of people around the world, despite efforts to reduce the risks. People and ecosystems least able to cope are being hardest hit, according to the latest Intergovernmental Panel on Climate Change (IPCC) report.

“This report is a dire warning about the consequences of inaction,” said Hoesung Lee, Chair of the IPCC. “It shows that climate change is a grave and mounting  threat to our wellbeing and a healthy planet. Our actions today will shape how people and nature responds to increasing climate risks.”

The world faces unavoidable multiple climate hazards over the next two decades with global warming of 1.5°C (2.7°F). Even temporarily exceeding this warming level will result in additional severe impacts, some of which will be irreversible. Risks for society will increase, including to infrastructure and low-lying coastal settlements.

Increased heatwaves, droughts and floods are already exceeding plants and animals’ tolerance thresholds, driving mass mortalities in species such as trees and corals. These weather extremes are occurring simultaneously, causing cascading impacts that are increasingly difficult to manage. They have exposed millions of people to acute food and water insecurity, especially in Africa, Asia, Central and South America, on Small Islands and in the Arctic.

To avoid mounting loss of life, biodiversity and infrastructure, ambitious, accelerated action is required to adapt to climate change, at the same time as making rapid, deep cuts in greenhouse gas emissions. So far, progress on adaptation is uneven and there are increasing gaps between action taken and what is needed to deal with the increasing risks, the new report finds. These gaps are largest among lower-income populations.

The Summary for Policymakers of the IPCC Working Group II report, Climate Change 2022: Impacts, Adaptation and Vulnerability was approved on Sunday February 27  2022, by 195 member governments of the IPCC, through a virtual approval session that was held over two weeks starting on February 14.

With fact upon fact, this report, which focuses on impacts, adaptation and vulnerability, reveals how people, and the planet, are getting “clobbered” by climate change, he said in a recorded message.

“Nearly half of humanity is living in the danger zone – now. Many ecosystems are at the point of no return – now. Unchecked carbon pollution is forcing the world’s most vulnerable on a frog march to destruction – now,” declared Mr Guterrez.

In many of those countries, population growth, urbanization, and unsustainable development practices are boosting the exposure of people and ecosystems to climate change. But all countries are affected, as we have seen in Germany, USA and Canada last year, he said.

WMO and the United Nations Environment Programme are co-founders and co-sponsors of the IPCC.

"Humanity has spent centuries treating nature like its worst enemy. The truth is that nature can be our saviour – but only if we save it first, » said UNEP Executive Director Inger Andersen.

The Working Group II report is the second instalment of the IPCC’s Sixth Assessment Report (AR6), which will be completed this year.

“This report recognizes the interdependence of climate, biodiversity and people and integrates natural, social and economic sciences more strongly than earlier IPCC assessments,” said Hoesung Lee. “It emphasizes the urgency of immediate and more ambitious action to address climate risks. Half measures are no longer an option.” 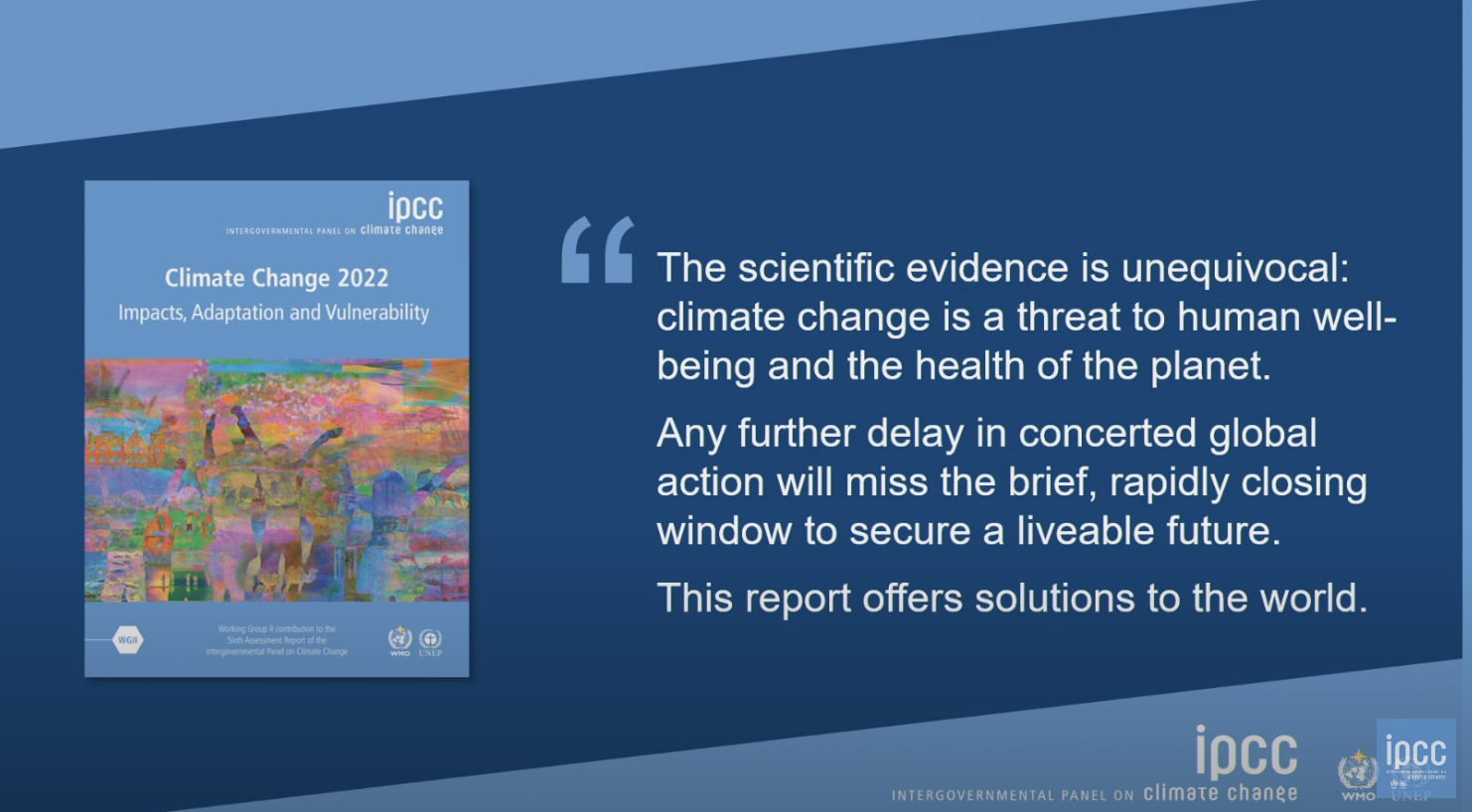 There are options to adapt to a changing climate. This report provides new insights into nature’s potential not only to reduce climate risks but also to improve people's lives.

“Healthy ecosystems are more resilient to climate change and provide life-critical services such as food and clean water”, said IPCC Working Group II Co-Chair Hans-Otto Pörtner. “By restoring degraded ecosystems and effectively and equitably conserving 30 to 50 per cent of Earth’s land, freshwater and ocean habitats, society can benefit from nature’s capacity to absorb and store carbon, and we can accelerate progress towards sustainable development, but adequate finance and political support are essential.”

Scientists point out that climate change interacts with global trends such as unsustainable use of natural resources, growing urbanization, social inequalities, losses and damages from extreme events and a pandemic, jeopardizing future development.

“Our assessment clearly shows that tackling all these different challenges involves everyone – governments, the private sector, civil society – working together to prioritize risk reduction as well as equity and justice in decision-making and investment”, said IPCC Working Group II Co-Chair Debra Roberts.

“In this way, different interests, values and world views can be reconciled. By bringing together scientific and technological know-how as well as Indigenous and local knowledge, solutions will be more effective.  Failure to achieve climate resilient and sustainable development will result in a sub-optimal future for people and nature.”

Cities: Hotspots of impacts and risks, but also a crucial part of the solution

This report provides a detailed assessment of climate change impacts, risks and adaptation in cities, where more than half the world’s population lives.  People’s health, lives and livelihoods, as well as property and critical infrastructure, including energy and transportation systems, are being increasingly adversely affected by hazards from heatwaves, storms, drought and flooding as well as slow-onset changes, including sea level rise.

There is increasing evidence of adaptation that has caused unintended consequences, for example destroying nature, putting peoples’ lives at risk or increasing greenhouse gas emissions. This can be avoided by involving everyone in planning, attention to equity and justice, and drawing on Indigenous and local knowledge.

A narrowing window for action 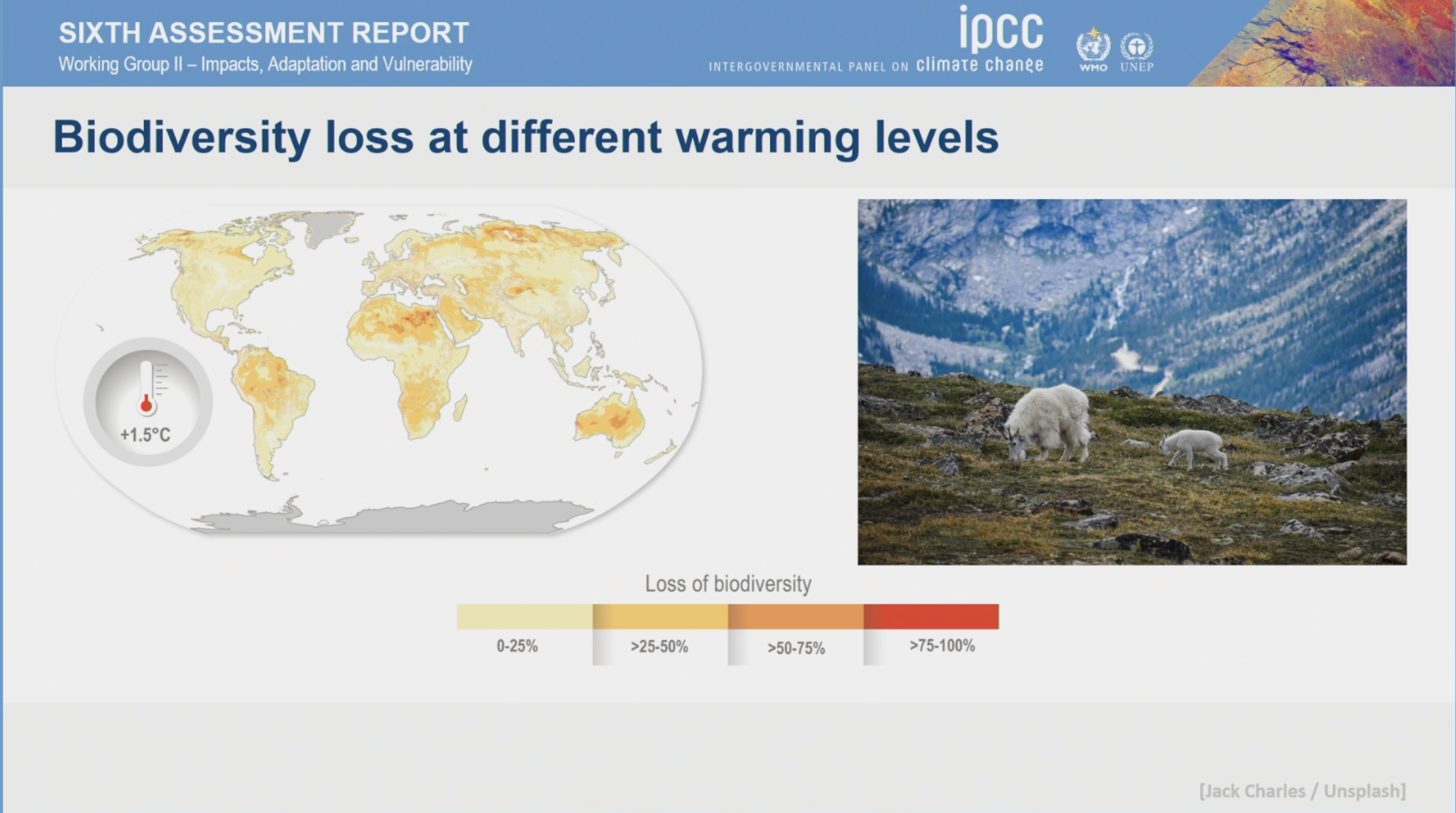 “The scientific evidence is unequivocal: climate change is a threat to human wellbeing and the health of the planet.  Any further delay in concerted global action will miss a brief and rapidly closing window to secure a liveable future”, said Hans-Otto Pörtner.

More information about the Sixth Assessment Report can be found here.

Assets available after the embargo is lifted on Media Essentials website.