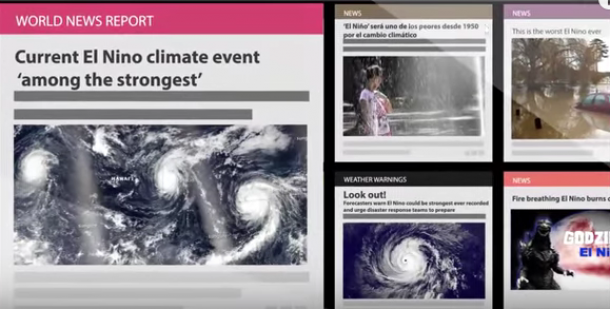 The powerful 2015-2016 El Niño has passed its peak but remains strong and will continue to influence the global climate, according to the latest update from the World Meteorological Organization. It is expected to weaken in the coming months and fade away during the second quarter of 2016.

Eastern and central tropical Pacific Ocean surface temperatures were more than 2 degrees Celsius above average in late 2015, providing evidence that the 2015-16 El Niño is one of the strongest on record, comparable with the 1997-98 and 1982-83 events. It is too early to establish conclusively whether it was THE strongest.

As typically happens, the El Niño reached its peak ocean surface temperature during November and December, but has since declined by about half a degree.

"We have just witnessed one of the most powerful ever El Niño events which caused extreme weather in countries on all continents and helped fuel record global heat in 2015," said WMO Secretary General Petteri Taalas. "In meteorological terms, this El Niño is now in decline. But we cannot lower our guard as it is still quite strong and in humanitarian and economic terms, its impacts will continue for many months to come," said Mr Taalas.

"Parts of South America and East Africa are still recovering from torrential rains and flooding. The economic and human toll from drought - which by its nature is a slowly developing disaster - is becoming increasingly apparent in southern and the Horn of Africa, central America and a number of other regions," he said.

"The world was better prepared for this event than ever before. Scientific research conducted during this event will enhance our understanding of El Niño and the inter-linkages between this naturally occurring climate phenomenon and human-induced climate change," said Mr Taalas. "Lessons learnt from this El Niño will be used to further build our resilience to weather related hazards, which will increase as a result of climate change."

The El Niño-Southern Oscillation (ENSO) phenomenon is the result of the interaction between the ocean and atmosphere in the east-central Equatorial Pacific. It has an irregular recurrence period of between two and seven years. Typically, El Niño peaks late in the calendar year, hence its name (Spanish for Christ Child). It causes droughts and excess rainfall in different parts of the world.

The WMO Update said that models indicate a return to an ENSO neutral state during the second quarter of 2016. It is too early to predict whether there will be a swing to La Niña (the opposite of El Niño) after that.

It is important to note that El Niño and La Niña are not the only factors that drive global climate patterns.  For example, the state of the Indian Ocean (the Indian Ocean Dipole), or the Tropical Atlantic Sea Surface Temperature, are also capable of affecting the climate in the adjacent land areas. Northern hemisphere winter conditions are influenced by the so-called Arctic and North Atlantic Oscillations.

The joint WMO-WHO Climate and Health Office is working to coordinate efforts to manage the health risks and responses in vulnerable countries.

WMO is the U.N. system’s authoritative voice on weather, climate and water

The 2015-2016 El Niño has been associated with a number of major impacts. These include:

2015 was the hottest on record by a wide margin because of the combination of the exceptionally strong El Niño and global warming caused by greenhouse gases.  The global average surface temperature was 0.76±0.1° Celsius above the 1961-1990 average. For the first time on record, temperatures in 2015 were about 1°C above the pre-industrial era, according to a consolidated analysis from the World Meteorological Organization (WMO). More details here

Eastern Africa: El Niño is usually associated with enhanced rainfall in countries including Kenya and Uganda within the equatorial sector of the Greater Horn of Africa during the October – December short rainy season.  However, local systems and the sea surface temperature patterns of the Indian Ocean are also important. In Ethiopia, 2015 spring rains failed and El Niño affected rainfall patterns for the 2015 summer/kiremt rains leading to serious food insecurity in affected areas.  Details on impacts here

Southern Africa; Below average rainfall was reported in a number of countries, including Lesotho, Malawi, Mozambique, South Africa, Swaziland, Zambia and Zimbabwe. The World Food Programme estimates that more than 40 million people could become food insecure. Details on impacts here

South Asia Southwest monsoon: The India Meteorological Department reported that the June-September rainfall over India as a whole was 86% of its long period average. El Niño is believed to have played a key role in the rainfall deficit. Conversely it was linked to higher than normal rainfall in southern India and Sri Lanka during winter.

South East Asia: El Niño is typically associated with drought in southern parts of South East Asia during the July to October period. This helped fuel wildfires in Indonesia, among the worst on record, which caused dense haze to cover many parts of Indonesia and other neighbouring countries, with significant repercussions for health. During the northeast monsoon season (December to early March) the impact of El Niño is less significant. More information here

Pacific Islands: Historically, El Niño has caused reduced rainfall in the southwest Pacific (from southern Papua New Guinea southeast to the southern Cook Islands) and enhanced rainfall in the central and eastern Pacific (e.g. Tuvalu, Kiribati, Tokelau and Nauru). But it also affects the number of tropical cyclones and their preferred tracks, so that there is a risk of extreme rainfall events even where drier than normal conditions are forecast.

Australia: El Niño contributed to a drier and warmer year in 2015.

South America:  El Niño has a major impact on a number of countries in South America and was linked to severe flooding in Paraguay in December. In its latest outlook, the International Center for the Investigation of El Niño (CIIFEN), predicted a high probability of above average rainfall in February-March-April in Mexico, northern Peru, coastal Ecuador, central and eastern Paraguay, southeastern Brazil, Urugua and northern Argentina. It said there was a significant likelihood of below average rainfall in Costa Rica, Panama, northern Venezuela, northern Colombia, northeastern and eastern Brazil and northern Chile.

CIIFEN is WMO’s Regional Climate Centre for Western South America based in Ecuador. It has organized briefings for policy makers and representatives from disaster risk management, agriculture and food production, health, tourism and other industries in South America. National meteorological services throughout the region have been very active in advising governments on preparedness measures to try to limit damages.

North America:  El Niño affected temperature and precipitation patterns in the United States and Canada and this is expected to continue for the coming months. The U.S. seasonal outlooks for February - April indicate an increased likelihood of above-average precipitation across the southern tier of the United States, and below-average precipitation over the northern tier. Above-average temperatures are favored in the North and West, and below-average temperatures are favored in the southern Plains and along the Gulf Coast. More information here

Coral bleaching: Record ocean temperatures, caused in part by El Niño, have contributed to a major coral bleaching event. It began in the north Pacific in summer 2014 and expanded to the south Pacific and Indian oceans in 2015. It is hitting U.S. coral reefs disproportionately hard. NOAA estimates that by the end of 2015, almost 95 percent of U.S. coral reefs will have been exposed to ocean conditions that can cause corals to bleach.

ENSO @ the Australian Bureau of Meteorology

ENSO @ the Ocean Institute of Peru