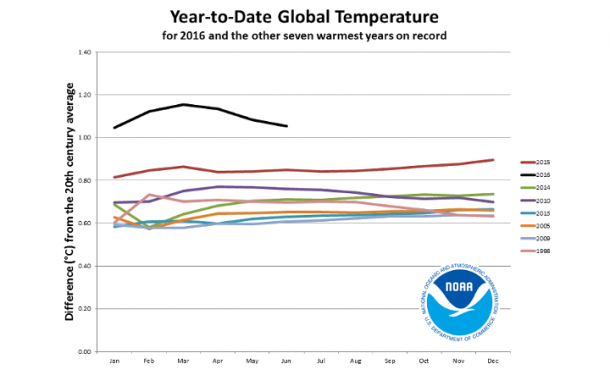 Geneva, 21 July 2016 (WMO) _ Global temperatures for the first six months of this year shattered yet more records, and mean that 2016 is on track to be the world’s hottest year on record.

Two separate reports from the U.S National Oceanic and Atmospheric Administration and NASA's Goddard Institute for Space Studies (NASA GISS) both highlighted the dramatic and sweeping changes in the state of the climate.

“Another month, another record. And another. And another. Decades-long trends of climate change are reaching new climaxes, fuelled by the strong 2015/2016 El Niño,” said World Meteorological Organization Secretary-General Petteri Taalas.

Carbon dioxide concentrations have passed the symbolic milestone of 400 parts per million in the atmosphere so far this year.  CO2 levels vary according to the season, but the underlying trend is upwards. They showed a surprising increase for the first half of 2016, rising in June 2016 to nearly 407 ppm, 4 ppm greater than June 2015.

“This underlines more starkly than ever the need to approve and implement the Paris Agreement on climate change, and to speed up the shift to low carbon economies and renewable energy,” said Mr Taalas.

United Nations Secretary-General Ban Ki-moon has invited leaders to a special event on 21 September to deposit their instruments of ratification, acceptance, approval or accession to the Paris Agreement on climate change. It will also provide an opportunity to other countries to publicly commit to the agreement before the end of 2016.

The average temperature in the first six months of 2016 was 1.3°C (2.4°F warmer than the pre-industrial era in the late 19th century, according to NASA.

Each month was record warm. Most of the world’s land and ocean surfaces had warmer to much-warmer-than-average conditions.

The El Niño event which developed in 2015 and was one of the most powerful on record contributed to the record temperatures in the first half of 2016. It dissipated in May. 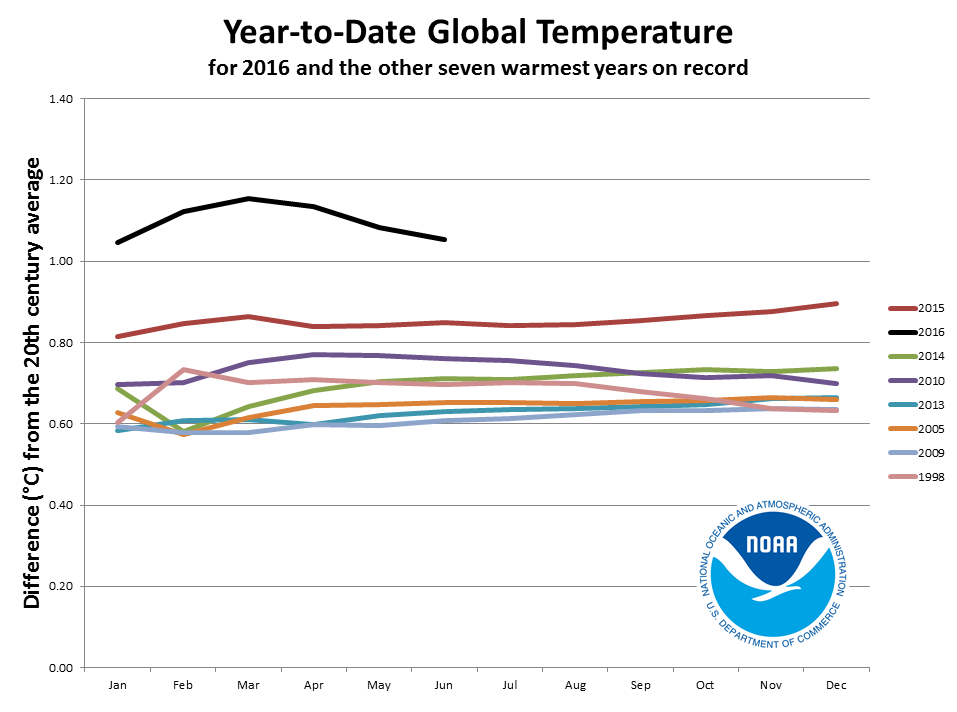 The heat has been especially pronounced in the Arctic, resulting in a very early onset of the annual melting of the Greenland ice sheet and Arctic sea ice. Snow cover in the northern hemisphere was exceptionally low.  The ice extent as of 20 July was very close to the lowest ever for this date.

The extent of Arctic sea ice at the peak of the summer melt season now typically covers 40 percent less area than it did in the late 1970s and early 1980s. Arctic sea ice extent in September, the seasonal low point in the annual cycle, has been declining at a rate of 13.4 percent per decade.

Rainfall in June 2016 varied significantly around the world. It was notably drier than normal across the western and central contiguous USA, Spain, northern Colombia, northeastern Brazil, Chile, southern Argentina, and across parts of central Russia.

Wetter-than-normal precipitation was observed across northern Argentina, northern and central Europe, much of Australia, and across central and southern Asia.

From January to 4 July, China saw 21.2% above average precipitation. South China entered the flood season on 21 March, 16 days earlier than normal and more than 150 counties were record wet, according to the China Meteorological Administration. More than 300 rivers crossed the water level warning mark.

Temperatures in the Coral Sea (including the Great Barrier Reef), and the Tasman Sea were highest on record for extended periods since late summer 2016, according to Australia’s Bureau of Meteorology.

These warm waters have also contributed to surface temperature warmth over Australia and unprecedented bleaching of the Great Barrier Reef, according to Australia’s independent Climate Council.

There has been widespread bleaching of reefs in many other parts of the world.