Global platform on disaster risk reduction: we need a drastic change of course 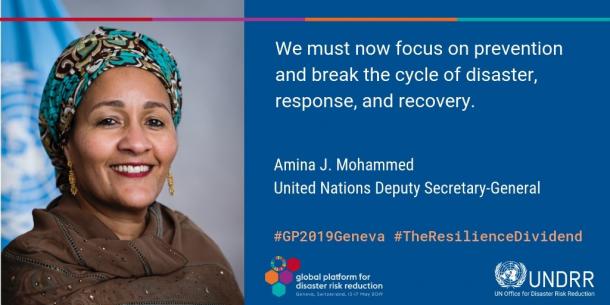 Global platform on disaster risk reduction: we need a drastic change of course

Geneva 17 May 2019 (WMO) _ The impacts of climate change, associated sea level rise and extreme weather are amplifying as a result of record greenhouse gas levels and combining with urbanization, environmental degradation and water stress to produce interlocking crises. There needs to be a drastic change of course, according to the top global forum on disaster risk reduction.

"We live with the highest concentration of carbon dioxide in the atmosphere for 3 million years," WMO Secretary-General Petteri Taalas told the Global Platform for Disaster Risk Reduction. The four warmest years on record have been in the past four years and the warming trend which has lasted since the start of this century is expected to continue as a result of the increase in greenhouse gas levels. Climate change mitigation is essential, as is climate change adaptation, he stressed. 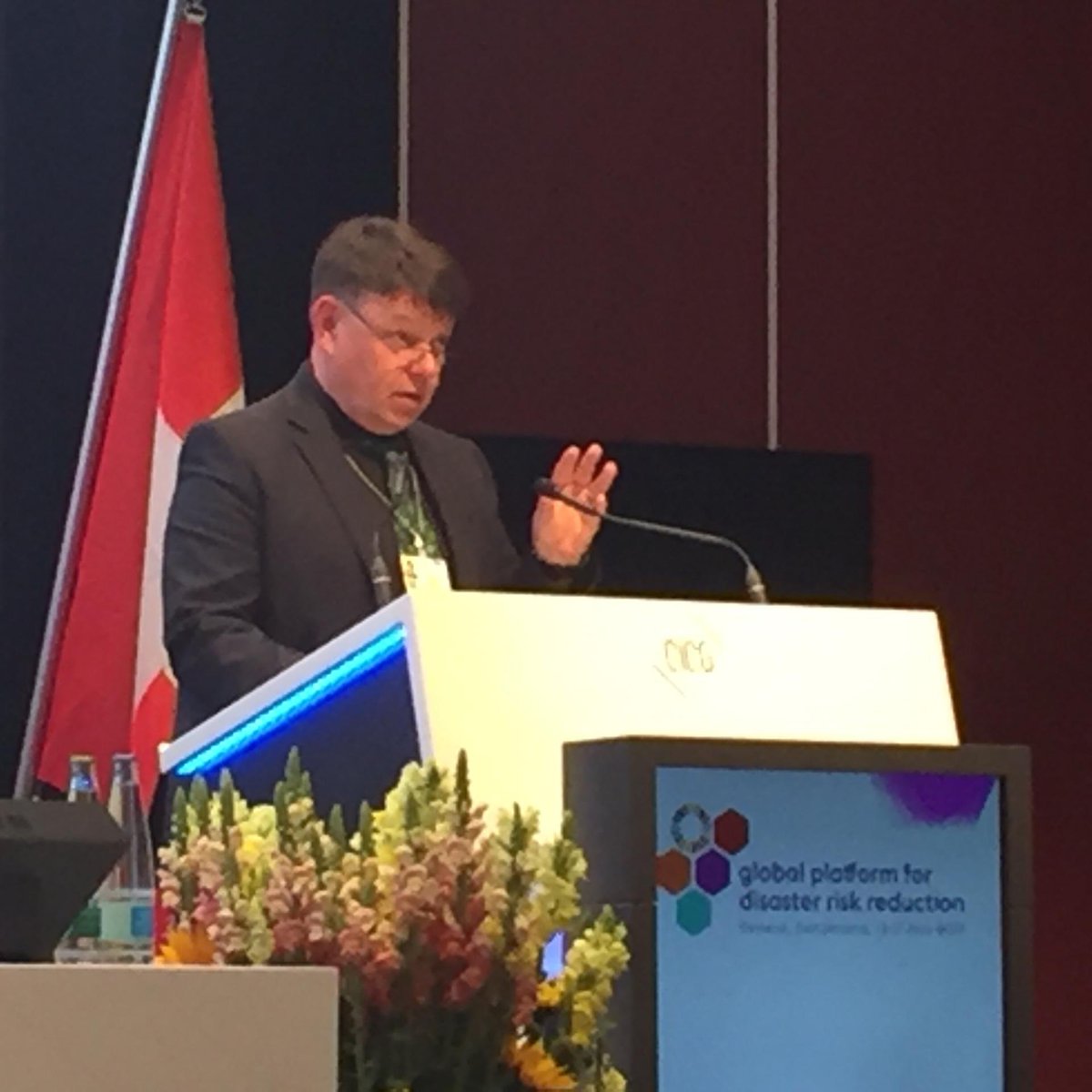 “Last year, in the United States alone, there were 14 weather- and climate-related disasters where the devastation cost more than US$1 billion dollars each, with a total of some US$49 billion. Worldwide, more than 35 million people were affected by floods. This year, tropical cyclone Idai left more than 1 000 people dead in Mozambique, Zimbabwe, and Malawi, and only a few weeks later tropical cyclone Kenneth was the strongest tropical cyclone to make landfall and strike the furthest north in Mozambique since modern records began,” said Mr Taalas.

The 2019 Global Platform for Disaster Risk Reduction focused on accelerating action to boost resilience against interlocking natural hazards that disrupt or destroy the lives of millions of people every year. The platform is organized biennially by the UN Office for Disaster Risk Reduction and took place from 13 to 17 May. The outcome of the Second Multi-Hazard Early Warning Conference (MHEWC-II), hosted by WMO, fed into the global platform discussions.

The global platform aims to accelerate progress towards the key targets of the Sendai Framework for Disaster Risk Reduction 2015-2030, the global plan to reduce disaster losses adopted by the international community in March 2015. The Co-Chairs’ Summary Resilience Dividend: Towards Sustainable and Inclusive Societies was issued at the end of the session, stressing that disaster risk reduction lies at the heart of the global agenda.

“If I had to select one sentence to describe the state of the world, I would say we are in a world in which global challenges are more and more integrated, and the responses are more and more fragmented, and if this is not reversed, it’s a recipe for disaster,” UN Secretary-General António Guterres commented in the Global Assessment Report 2019, published to coincide with the global platform.

Mr Taalas delivered a joint statement on behalf of the UN system, declaring the need to “make a drastic change of course,” in order to tackle global crises.

“We do not have time to lose. As the UN Secretary-General has pointed out, ‘Climate change is moving faster than we are’. Urbanization and industrialization, water scarcity, land degradation and desertification, and biodiversity loss are some of the many inter-linked drivers of increasing disaster and climate change impacts. The most vulnerable countries and peoples are already facing the devastating impacts. As we have witnessed in Mozambique, India, East Africa and many other countries and regions around the world in the past years, climate and disaster risk is pushing millions of people back into poverty each year. Millions are displaced. Many are being left behind, » said the joint statement.

“We need to step up efforts to manage existing risks that have built up over time, while preventing as much as possible future risks from being created,” said the statement.

The Global Platform aims to review progress, share knowledge and discuss the latest developments and trends in reducing disaster risk.

The outcome of the Second Multi-Hazard Early Warning Conference (MHEWC-II), hosted by WMO, fed into the global platform discussions. The meeting on 13-14 May was organized by the 19 partners of the International Network for Multi-Hazard Early Warning Systems (IN-MHEWS) and additional organizations. The conference agreed a series of recommendations for further action. It also issued a communique from directors of 19 participating national meteorological and hydrological services reaffirming their commitment to improving multi-hazard early warnings.

The conference focused on improved warnings – and improved action – in the face of hazards like earthquakes, volcanic eruptions, extreme weather, water and climate events and the interlocking challenges of climate change, population increase, urbanization and environmental degradation.

Just as the engine needs to propel the car to the last mile, and the last metre, it is essential that early warnings reach those who need them most, the Second Multi-Hazard Early Warning Conference heard.

For Cyclone Idai, he said that the community in low-lying areas was caught without flood warnings.

There was no contingency plan to deal with an event of such magnitude. The response was too slow and there was a total breakdown in communications and basic services. Beira and surrounding areas received 30% of annual rainfall in a few days. Too much attention was focussed on the fury of the wind, and not enough on the flooding potential of the  torrential rainfall.

Cyclone Kenneth hit an area not used to intense tropical cyclones and so a major challenge was convincing the community to evacuate, he said.

Although nine in 10 of disasters triggered by natural hazards have been caused by floods, storms, droughts, heatwaves and other high-impact weather, the majority of fatalities in the past 20 years were due to geophysical events, mostly earthquakes and tsunamis.

Indonesia, which sits on the Ring of Fire, experienced 11,920 earthquake events in 2018. However, two deadly tsunamis, which killed hundreds of people, were due to sub-marine slides, and volcanic eruption. The country’s early warning system was only compatible for tsunamis induced by earthquakes, said Dwikorita Karnawati, head of Indonesia’s Meteorological, Climatological and Geophysical Agency (BMKG). Indonesia is in the process of moving to a multi-hazard early warning system to try to meet the challenges, she said.

UNESCO’s Intergovernmental Oceanographic Commission stressed the need for “new innovation, new investment and new science” to improve the tsunami early warning and monitoring network and to move towards a multi-source approach.

Destruction of the environment and ecosystems has aggravated the challenge. Deforestation increases the risk of heavy precipitation triggering floods and landslides and, because of the loss of trees, accentuates drought.

“This is no longer a natural hazard, this is manmade disaster,” said Pascal Peduzzi, of UN Environment’s Global Resource Information Database (GRID). “We need a 10-year early warning system to take care of the environment,” he said. 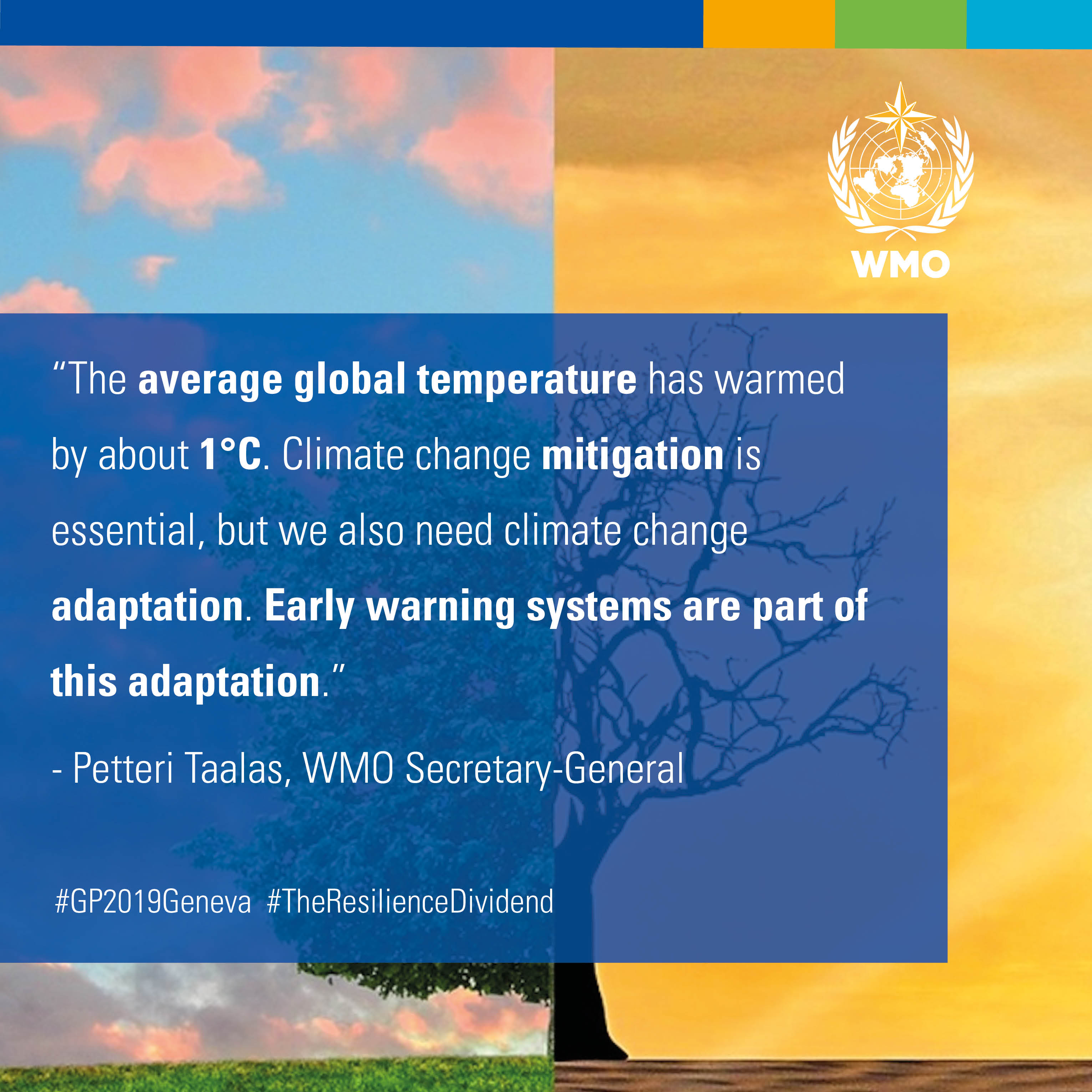 Innovations in the development of information and communication technologies can be effectively used to reach vulnerable communities. But it is vital to ensuring a people-centred approach when developing an early warning system that takes into account people’s needs, their perceptions of risk, how different community members access and communicate information. We need to move away from the “top down” approach.

“The role of human behaviour in the warnings is pivotal. We need to put people at the centre,” said David Johnston, of New Zealand’s Geological Survey.

There has been enormous progress in weather forecasting over the years and this now needs to advance from what the weather will be to what the weather will do – known as “impact-based” forecasting. Partnerships between the scientific and research communities and humanitarian and development practitioners are essential to ensure that warnings translate to actions. Communication of early warning messages needs to be tailored to stakeholders to ensure they understand the messages and how to act on them.

The Cyclone Preparedness Programme for Bangladesh – a joint programme between the government of Bangladesh and the Red Crescent Society – said that the refugee crisis in camps in low-lying coastal areas had led to an “early warning system on steroids.” Collective action and mobilization had ensured that all camps were prepared ahead of the advance of tropical cyclone Fani earlier in May.

Satellite technology and computing power have facilitated advances in monitoring, prediction and interpretation of hazards. But application of the best science and technology is wasted if communication is wrong.

“We need the early warnings to be useful, usable and used and to address real user problems and inform viable user responses,” Brian Golding, of the UK’s Met Office, told the closing session.

The conference recommended a phased approach to multi-hazard early warning systems. It stressed the need for sustainable resourcing and the need to combine technological developments with societal innovation. Traditional, indigenous and local knowledge should be leveraged and the system must be kept simple and yet adaptable. Open data exchange is crucial to saving lives.

“Multi-hazard early warning systems are extremely complex. But the reality is that citizens must make immediate decisions based on that information, which has to be distilled in a way that people can understand and take actions to save their lives and reduce their risk,” said Michel Jean, President of WMO’s Commission for Basic Systems.

The conference recognized the need to demonstrate the benefits of early warning and their value in terms of investment.

Magagi Laouan, Minister of Humanitarian Action and Disaster Management of Niger, said that 3,702 registered disasters have cost his country more than US$3 billion in the past 40 years. They have killed 10,625 people, 17 million  livestock animals and destroyed 72,000 homes and 2.6 million hectares of agricultural land. Niger has now set up an early warning system. With support from the Global Framework for Climate Services and the Climate Risk and Early Warning Systems initiative, known for short as CREWS, authorities are working to reduce weather and climate-related losses and boost productivity in agriculture and to ensure that drought does not deteriorate into famine.

The Democratic Republic of Congo is modernizing its hydro-meteorological service, with support from the multi-donor CREWS initiative, the conference was told. The US$8 million project is expected to lead to eight-fold benefits worth US$64 million, especially for agriculture, with knock-on benefits for other sectors.

The World Bank, through its Global Facility for Disaster Risk Reduction, is working to upgrade multi-hazard early warning systems in developing countries and calculates a benefit/cost ratio of at least 3:1. Its action plan on climate change adaptation and resilience aims to expand access to high-quality hydrometeorological data and early warnings systems for an additional 250 million people in at least 30 developing countries by 2025.

Key messages include the need for legal and policy frameworks, community engagement and partnerships among academia, the public and private sector.

“Meteorological and other scientific information alone cannot lead to disaster risk reduction if governments have no framework and do not understand what action they can take. The legal framework is critical. This needs a joint effort from all of us,” said WMO Assistant Secretary-General Wenjian Zhang.

The communique from National Meteorological and Hydrological Services is available at 2019.05.14_MHEWC-II_WMO-PRs-Communique-Final-Clean.docx