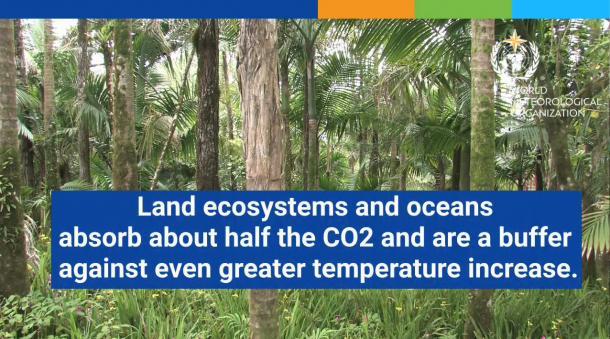 Geneva, 25 October 2021 (WMO) - The abundance of heat-trapping greenhouse gases in the atmosphere once again reached a new record last year, with the annual rate of increase above the 2011-2020 average. That trend has continued in 2021, according to the World Meteorological Organization (WMO) Greenhouse Gas Bulletin.

Concentration of carbon dioxide (CO2), the most important greenhouse gas, reached 413.2 parts per million in 2020 and is 149% of the pre-industrial level. Methane (CH4) is 262% and nitrous oxide (N2O)  is 123% of the levels in 1750 when human activities started disrupting Earth’s natural equilibrium. The economic slowdown from COVID-19 did not have any discernible impact on the atmospheric levels of greenhouse gases and their growth rates, although there was a temporary decline in new emissions.

As long as emissions continue, global temperature will continue to rise. Given the long life of CO2, the temperature level already observed will persist for several decades even if emissions are rapidly reduced to net zero. Alongside rising temperatures, this means more weather extremes including intense heat and rainfall, ice melt, sea-level rise and ocean acidification, accompanied by far-reaching socioeconomic impacts.

Roughly half of the CO2 emitted by human activities today remains in the atmosphere. The other half is taken up by oceans and land ecosystems. The Bulletin flagged concern that the ability of land ecosystems and oceans to act as “sinks” may become less effective in future, thus reducing their ability to absorb carbon dioxide and act as a buffer against larger temperature increase.

The Bulletin shows that from 1990 to 2020, radiative forcing – the warming effect on our climate - by long-lived greenhouse gases increased by 47%, with CO2 accounting for about 80% of this increase. The numbers are based on monitoring by WMO’s Global Atmosphere Watch network.

“The Greenhouse Gas Bulletin contains a stark, scientific message for climate change negotiators at COP26. At the current rate of increase in greenhouse gas concentrations, we will see a temperature increase by the end of this century far in excess of the Paris Agreement targets of 1.5 to 2 degrees Celsius above pre-industrial levels,” said WMO Secretary-General Prof. Petteri Taalas. “We are way off track.”

“The amount of CO2 in the atmosphere breached the milestone of 400 parts per million in 2015. And just five years later, it exceeded 413 ppm. This is more than just a chemical formula and figures on a graph. It has major negative repercussions for our daily lives and well-being, for the state of our planet and for the future of our children and grandchildren,” said Prof. Taalas.

“Carbon dioxide remains in the atmosphere for centuries and in the ocean for even longer. The last time the Earth experienced a comparable concentration of CO2 was 3-5 million years ago, when the temperature was 2-3°C warmer and sea level was 10-20 meters higher than now. But there weren’t 7.8 billion people then,” said Prof. Taalas.

“Many countries are now setting carbon neutral targets and it is hoped that COP26 will see a dramatic increase in commitments. We need to transform our commitment into action that will have an impact of the gases that drive climate change. We need to revisit our industrial, energy and transport systems and whole way of life.  The needed changes are economically affordable and technically possible. There is no time to lose,” said Prof. Taalas.

Highlights of the Bulletin

Land and ocean CO2 sinks have increased proportionally with the increasing emissions in the past 60 years. But these uptake processes are sensitive to climate and land-use changes. Changes in the effectiveness of carbon sinks would have strong implications for reaching the goals of the 2015 Paris Agreement and will require adjustments in the timing and/or size of the emission reduction commitments.

Ongoing climate change and related feedbacks, like more frequent droughts and the connected increased occurrence and intensification of wildfires might reduce CO2 uptake by land ecosystems. Such changes are already happening, and the Bulletin gives an example of transition of the part of Amazonia from a carbon sink to a carbon source. Ocean uptake might also be reduced due to higher sea surface temperatures, decreased pH due to CO2 uptake and slowing of the meridional ocean circulation due to increased melting of sea ice.

Timely and accurate information on changes are critical to detecting future changes in the source / sink balance and these are monitored by the Global Atmosphere Watch networks.

Carbon dioxide is the single most important greenhouse gas in the atmosphere, accounting for approximately 66% of the warming effect on the climate, mainly because of fossil fuel combustion and cement production.

The globally averaged concentrations for CO2 reached a new high of 413.2 ppm in 2020. The increase in CO2 from 2019 to 2020 was slightly smaller than 2018 to 2019 but larger than the average annual growth rate over the last decade. This is despite the approximately 5.6% drop in fossil fuel CO2 emissions in 2020 due to the COVID-19 restrictions.

Data from the monitoring stations clearly show that levels of CO2 continued to increase in 2021.

Methane is a powerful greenhouse gas which remains in the atmosphere for about a decade.

Methane accounts for about 16% of the warming effect of long-lived greenhouse gases, according to the US National Oceanic and Atmospheric Administration (NOAA). Approximately 40% of methane is emitted into the atmosphere by natural sources (for example, wetlands and termites), and about 60% comes from anthropogenic sources (for example, ruminants, rice agriculture, fossil fuel exploitation, landfills and biomass burning).

Reducing atmospheric methane in the short term could support the achievement of the Paris Agreement and help in reaching many Sustainable Development Goals due to multiple co-benefits of methane mitigation. But this does not reduce the need for strong, rapid and sustained reductions in CO2.

Nitrous Oxide is both a powerful greenhouse gas and ozone depleting chemical. It accounts for about 7% of the radiative forcing by long-lived greenhouse gases.

Global human-induced N2O emissions, which are dominated by nitrogen additions to croplands, increased by 30% over the past four decades. Agriculture, owing to the use of nitrogen fertilizers and manure, contributes 70% of all anthropogenic N2O emissions. This increase was mainly responsible for the growth in the atmospheric burden of N2O.

The WMO Global Atmosphere Watch Programme coordinates systematic observations and analysis of greenhouse gases and other atmospheric constituents. Greenhouse gas measurement data are archived and distributed by the World Data Centre for Greenhouse Gases (WDCGG) at the Japan Meteorological Agency.

A separate and complementary Emissions Gap Report by UN Environment will be released on 26 October. The Emissions Gap report assesses the latest scientific studies on current and estimated future greenhouse gas emissions; they compare these with the emission levels permissible for the world to progress on a least-cost pathway to achieve the goals of the Paris Agreement. This difference between “where we are likely to be and where we need to be” is known as the emissions gap.