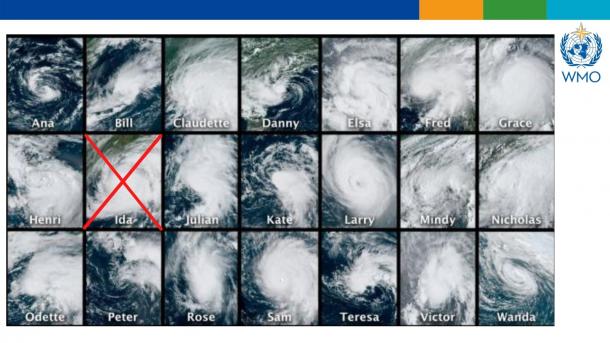 Geneva, 27 April 2022 (WMO) - The World Meteorological Organization (WMO) Hurricane Committee has retired Ida from the rotating lists of Atlantic tropical cyclone names because of the death and destruction caused by the category 4 hurricane in the United States of America in 2021.

Imani will instead be used in the lists of names, which are overseen by WMO to help in the communication of storm warnings and to alert people about potentially life-threatening risks.  The names are repeated every six years, unless a storm is so deadly that its name is retired – as in the case of Ida. In total, 94 names have now been retired from the Atlantic basin list since 1953, when storms began to be named under the current system.

The naming convention – whilst attracting the most public attention – is only a small part of the life-saving work of the Hurricane Committee, which focuses on operational priorities including the provision of forecasts and warnings for wind, storm surge and flooding hazards, as well as impact assessments. 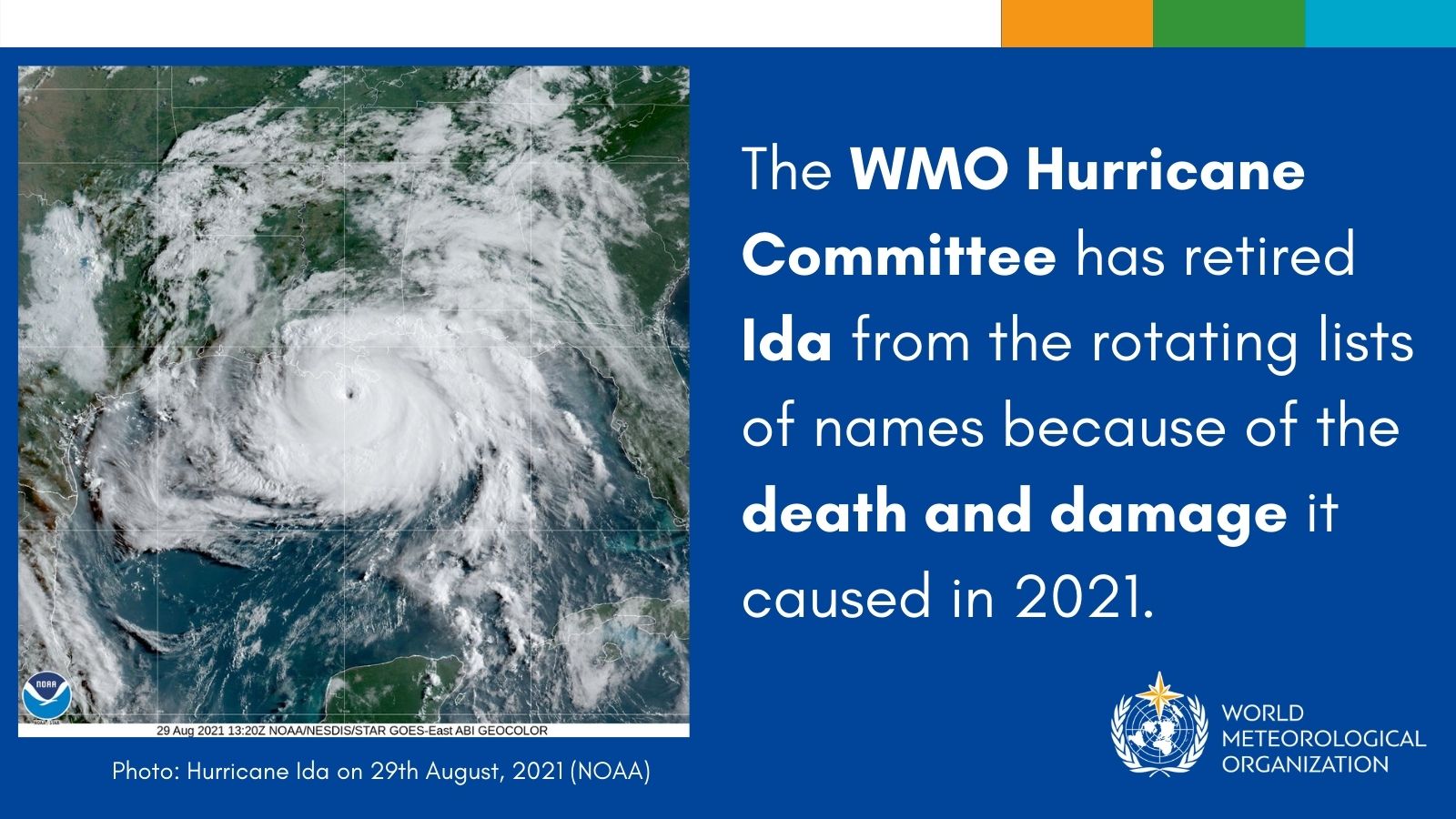 The Hurricane Committee consists of experts from National Meteorological and Hydrological Services and serves North America, Central America and the Caribbean (WMO Regional Association IV). It reviewed the unusually active 2021 Atlantic season and fine-tuned preparations for 2022 at its annual session, held virtually from 25 to 28 April.

The Atlantic hurricane season officially lasts from 1 June to 30 November. Named storms have formed prior to the official start of the hurricane season in about half of the past 10-15 years, including each of the past seven years (2015-2021). Pending the outcome of a technical study by the U.S. National Weather Service, the Hurricane Committee did not discuss any resolution to bring forward the official season date.

“The RA-IV Hurricane Committee's work is critical to keep our nations coordinated well before the next storm threatens. Impacts from a single storm can affect multiple countries, so it is critical we have a plan, coordinate our efforts, and share challenges and best practices", said Ken Graham, Hurricane Committee Chair and Director of the WMO Regional Specialized Meteorological Center Miami/US National Hurricane Center.

“The Intergovernmental Panel on Climate Change's Sixth Assessment Report projects that the global proportion of tropical cyclones that reach very intense (category 4-5) levels, along with their peak winds and rainfall rates, are expected to increase with climate warming. Developing countries and small islands are on the frontlines. Accurate early warnings are no longer a luxury but a must,” says Evan Thompson, President of WMO’s Regional Association for North America, Central America and the Caribbean and head of Jamaica’s national meteorological service.

Every year, there are on average 84 named tropical cyclones all over the world. Over the past 50 years, every single day, they have caused on average 43 deaths and US$ 78 million losses  and have also been responsible for one third of both deaths and economic losses from weather-, climate- and water-related disasters, according to WMO statistics from 1970-2019. But the death toll has fallen dramatically thanks to improvements in forecasting, warning and disaster risk reduction coordinated by WMO’s Tropical Cyclone Programme.

United Nations Secretary-General Antonio Guterres has tasked WMO with drawing up a plan to ensure that everyone in the world is covered by early warning systems in the next five years.

2021 was the third most active year on record in terms of named storms, according to the U.S. National Oceanic and Atmospheric Administration. It marked the sixth consecutive above-normal Atlantic hurricane season. For the second straight year, it exhausted the regular names from WMO’s rotating list (the first time this has ever happened).

Ida was the most devastating storm of the season. It peaked as a category 4 hurricane (on the Saffir-Simpson Hurricane Wind Scale) that caused severe to catastrophic damage in southeastern Louisiana. Ida later became an extratropical low that caused heavy rain and deadly flooding in the northeastern United States. Ida is responsible for 55 direct fatalities and 32 indirect fatalities in the United States. NOAA’s National Centers for Environmental Information (NCEI) estimated that Ida’s wind, rain, storm surge and tornadoes caused a total of $75 billion in damage in the United States. 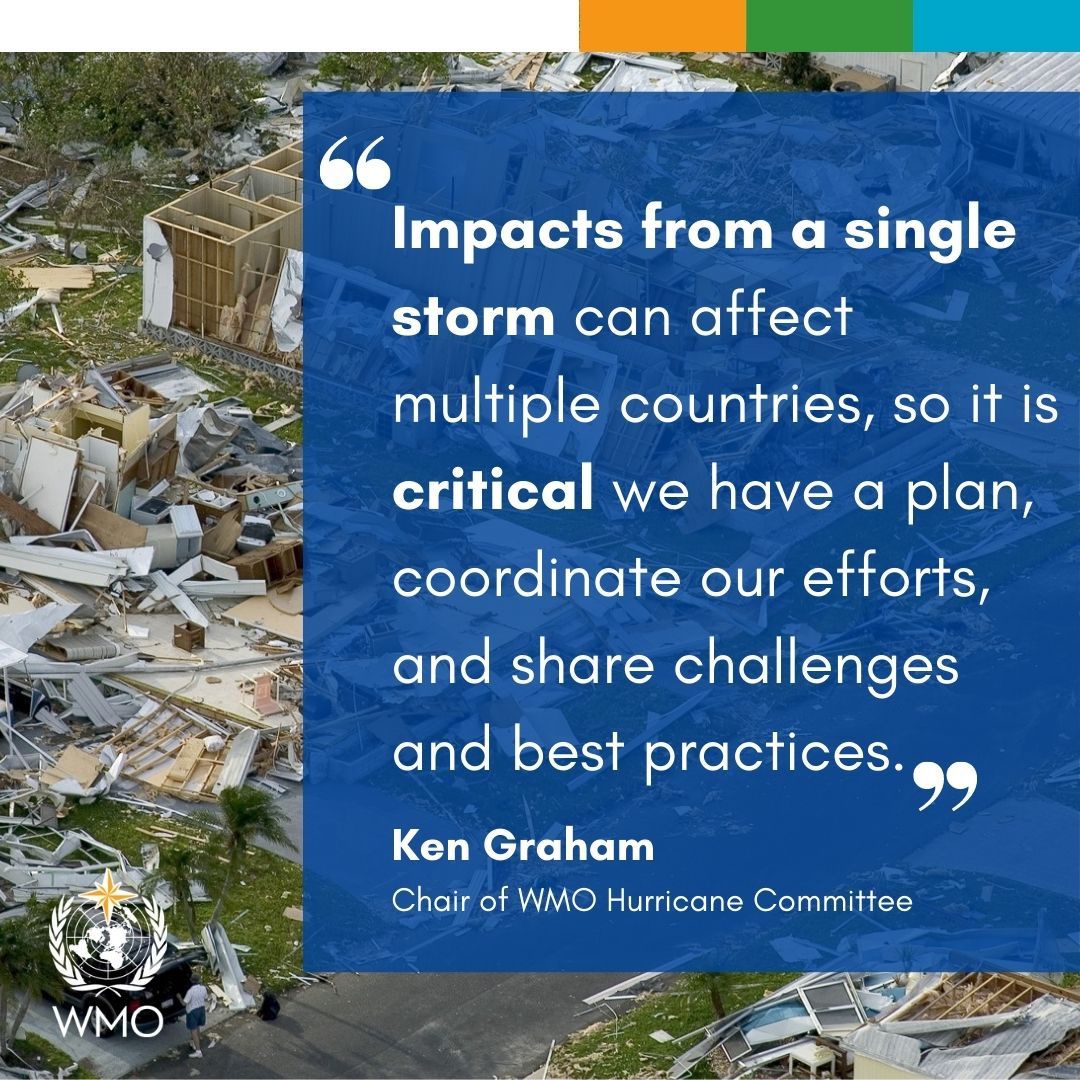 Another damaging storm was Elsa, which formed as was an early-season category 1 hurricane over the central tropical Atlantic. It was the first hurricane to directly impact Barbados since Hurricane Janet in 1955 and it also affected other Caribbean countries as well as the USA.

Climate factors, including La Niña, above-normal sea surface temperatures earlier in the season, and above-average West African Monsoon rainfall were the primary contributors for the above-average 2021 season. Another contributing factor is a phenomenon known as the Atlantic Multidecadal Oscillation, which entered a warm phase in 1995 which favors more, stronger, and longer-lasting storms.

There has been considerable media discussion about bringing forward the official starting date of the season to accommodate May storms. Many of these are short-lived, hybrid (subtropical) systems that are now being identified because of better monitoring and policy changes that we now name subtropical storms.

To provide more consistent information on the potential for late May and early June systems, the National Hurricane Center in 2021 began the routine issuance of the Atlantic Tropical Weather Outlooks (TWOs) on May 15th, which is when routine TWOs also began for the eastern Pacific basin.