Vulnerable communities in Africa and the Pacific and Caribbean are now benefiting from improved early warning systems against extreme weather as part of an international drive to boost resilience and climate change adaptation. But further investments are needed to reduce the risks from hazards like tropical cyclones, floods and drought.

A ministerial event at the United Nations climate change conference on 15 November was presented with the first results from the Climate Risk and Early Warning Systems (CREWS) initiative. Launched at the Paris climate change negotiations in 2015, CREWS aims to mobilize US$100 million by 2020 to save lives and support sustainable development.

“In the Paris Agreement era, it is unacceptable that populations are not forewarned of an impending weather disaster. Let us now reinforce support for CREWS, launched in Paris at COP21, to enable the most vulnerable to benefit from effective early warning systems” said Nicolas Hulot, French Minister for the Ecological and Inclusive Transition.

“We are seeing an increase in global temperatures and a growing number of disasters,” said World Meteorological Organization Secretary-General Petteri Taalas, pointing to this year’s devastating Atlantic hurricane season, as well as floods, heatwaves and forest fires. “in addition to climate change mitigation we have to pay attention to adaptation. A very powerful way to adapt to climate change is to invest in climate services and early warning systems. CREWS is contributing in a very positive manner to achieve that target.”

CREWS action in Niger, Burkina Faso and the Pacific Region was highlighted at the event hosted by the Government of France. Ministers also made an investment case for better programming and financing of early warning systems in Least Developed Countries and Small Island Developing States.

“Niger is exposed to hazards like floods. In 2012 Niger suffered the worst floods for 40 years, and this year over 100 people have died due to flooding. In the past, information and warnings was not accessible to the people living in exposed neighbourhoods. We have received funding from CREWS in order to improve early warnings so we can inform people of the risks. We are really happy about this support”, said Laouan Magagi, Minister for Humanitarian Action and Disaster Management in Niger.

In Burkina Faso, Mali and Niger, CREWS is supporting the improvement of operational hydro-meteorological forecasts and early warning services, with an emphasis on flood and drought-related risks. There is a special focus on early warnings for agriculture, food security and civil protection. There is a similar project in the Democratic Republic of Congo.

The CREWS initiative was first announced at the Sendai Disaster Risk Reduction Conference. It builds on existing activities and enables countries to access additional resources from the Green Climate Fund and other sources.

So, for instance, in Mali, a CREWS grant of US$ 2.7 million to strengthen hydro-meteorological services leveraged a US$ 23 million grant from the Green Climate Fund.

“Without CREWS we wouldn’t have had a basis for this,” said Laura Tuck, Vice President for Sustainable Development, World Bank Group. “We need to extend the reach of CREWS and build on what is already working. When we have early warning systems in place and have high quality forecasts and get the warnings out, we actually save lives,” she added.

There is a special focus on women, who play an important role in responding to early warnings , and are very effective ambassadors to build resilience.

Espen Ronneberg, Climate Change Adviser, Secretariat of the Pacific Regional Environment Programme said that the Pacific Islands recognize the importance of early warning systems to deal with extreme climate events and hazards such as storm surges.

“Category 5 tropical cyclones Pam and Winston which affected Vanuatu and Fiji are reminders that we need robust early warning systems,” he said.

The CREWS Steering Committee last week approved a new project, “Weather and Climate Early Warning System for Papua New Guinea.” It aims to improved control and maintenance of the existing drought and flood monitoring network and tailored early warnings for the agriculture sector and disaster managers, with an investment totalling US$1,650,000.

The Steering Committee also approved a project for the Caribbean to review the effectiveness of the early warning systems for the recent hurricanes Irma and Maria. It will also address immediate forecasting requirements of affected countries through WMO global and regional centres.

Albert Martis, Curacao and St Maarten Permanent Representative to WMO, recalled the devastation inflicted by major hurricanes in close succession this year. He said Hurricane Irma knocked out all communications on the island of St Maarten, but authorities still managed to issue emergency warnings for another major hurricane, Jose, which was expected to impact St Maarten four days later. Thanks to good early warnings, the loss of life was minimized even though the island of St Maarten was barely recognizable after the disaster, he said.

The CREWS is a coalition of Australia, France, Germany, Luxembourg and the Netherlands. Canada is aligning resources.  It is being implemented by the World Meteorological Organization (WMO), the World Bank, and the Global Facility for Disaster Reduction and Recovery (GFDRR) with support of the UN Office for Disaster Risk Reduction (UNISDR).

Brigitte Collet, Ambassador for Climate Change Negotiations, Renewable Energy and Climate Risk Prevention, moderated the event. She  thanked WMO, the World Bank and UNISDR, as well as the contributing member countries, and the CREWS Secretaiat, without whose support none of those projects could have been mounted. She appealed for additional contributions to finance new projects which bring concrete solutions to life threatening problems”

According to WMO, over 80 percent of the world’s 48 least developed countries and many small island developing States have only a basic early warning system. Weather observations networks, the foundation of early warning systems, are inadequate in many African countries.

A video explaining the work of CREWS is available here. 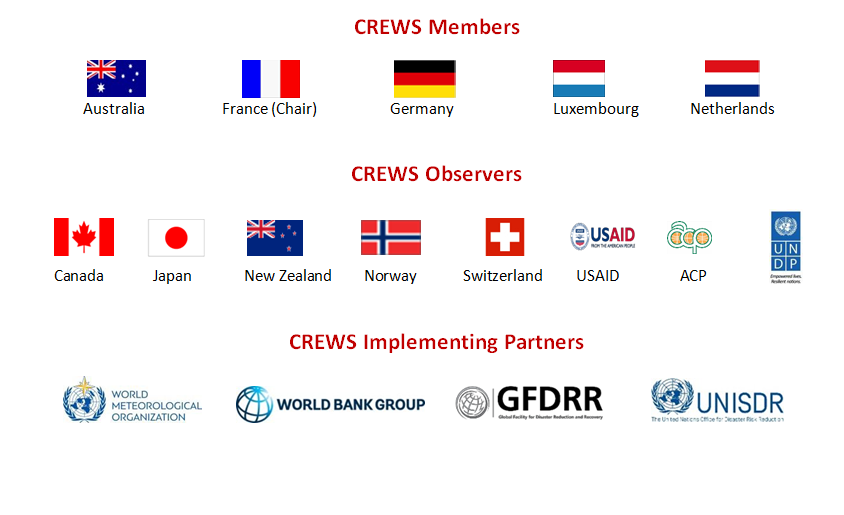