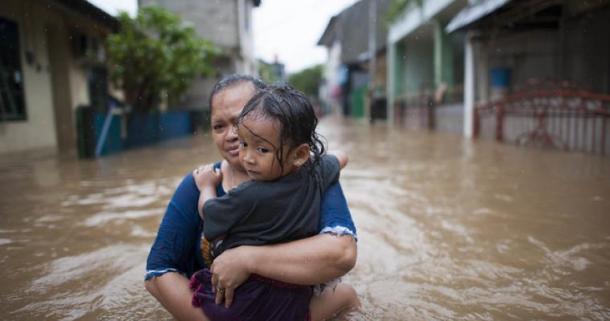 Geneva, 9 May 2019 (WMO) - Climate change, population increase, urbanization and environmental degradation are amplifying the impact of extreme weather, water and climate events such as tropical cyclones, floods and extreme heat on growing numbers of people. Improved early warning systems and more coordinated disaster risk reduction are more important than ever before.

An international conference will therefore inject new urgency into the drive to improve warnings for an interlocking range of hazards, including non-hydrometeorological ones such as earthquakes, landslides and biological hazards. It will also address how to ensure that these warnings reach those who need them most and are translated into effective action on the ground.

It takes place as Mozambique struggles with the aftermath of two unprecedented back-to-back tropical cyclones, which caused hundreds of deaths, devastated agriculture and infrastructure and set back national socio-economic development. India and Bangladesh are similarly counting the cost of a major cyclone which caused relatively few casualties, thanks to accurate weather forecasts and exemplary disaster management.

The Second Multi-Hazard Early Warning Conference (MHEWC-II) will be held in Geneva, Switzerland, on 13-14 May. It is organized by the World Meteorological Organization (WMO) and its partners of the  International Network for Multi-Hazard Early Warning Systems (IN-MHEWS). It follows an inaugural first such conference in 2017 and feeds into the 2019 Global Platform for Disaster Risk Reduction taking place from 13-17 May, also in Geneva. The Global Platform is a biennial multi-stakeholder forum established by the UN General Assembly and convened by the UN Office for Disaster Risk Reduction (UNDRR) with the aim to review progress, share knowledge and discuss the latest developments and trends in reducing disaster risk.

“As we saw in Mozambique and India, a single tropical cyclone brings a cascade of dangers, including destructive winds, heavy seas, storm surge, coastal inundation and inland flooding from heavy rain. It is no longer enough to issue a single forecast about what the weather will be. Instead, there is a need for impact-based multi-hazard warnings about what the weather – and water – will do,” said WMO Secretary-General Petteri Taalas.

“Climate change does not cause tropical cyclones, but it exacerbates the impact,” he said.

The Special Representative of the UN Secretary-General for Disaster Risk Reduction, Mami Mizutori, said: “Early warnings followed by early action can save many lives as has proven to be the case with Cyclone Fani in India and Bangladesh where timely evacuations were very effective. Many more deaths can be prevented if we continue to support low and middle-income countries to develop early warning systems across multiple hazards.”

Over the 20-year period between 1998 and 2017, climate-related and geophysical disasters killed 1.3 million people and left a further 4.4 billion injured, homeless, displaced or in need of emergency assistance. While the majority of fatalities were due to geophysical events, mostly earthquakes and tsunamis, 91% of all disasters were caused by floods, storms, droughts, heatwaves and other extreme weather events, according to a report by UNDRR and the Centre for Research on the Epidemiology of Disasters.

Environmental risks (i.e. those posed by chemical, natural and biological hazards) continue to dominate according to the World Economic Forum (WEF)’s annual global risks perception survey (The Global Risks Report 2019 (WEF, 2019)), accounting for three of the top five risks by likelihood and four by impact where extreme weather was ranked as number one and demonstrates why MHEWS related  services and expertise are needed in decision-making at all levels,

Participants at the conference will focus on how countries can improve the availability of, and access to, multi-hazard early warnings as well as risk information and assessments. This is a key global target of the Sendai Framework for Disaster Risk Reduction 2015-2030, the global plan to reduce disaster losses adopted by UN Member States in March 2015.

The Second Multi-Hazard Early Warning Conference takes place at WMO headquarters in Geneva. It will examine recent advances in multi-hazard early warning systems and future priorities. It will be opened by WMO Secretary-General Petteri Taalas and the Special Representative of the UN Secretary-General for Disaster Risk Reduction, Mami Mizutori. It will be livestreamed.