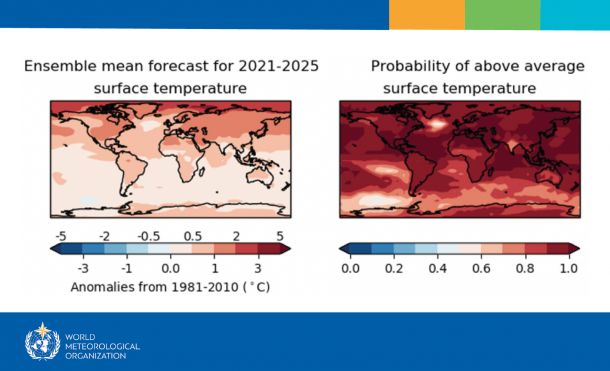 Geneva, 27 May 2021 (WMO) - There is about a 40% chance of the annual average global temperature temporarily reaching 1.5°C above the pre-industrial level in at least one of the next five years – and these odds are increasing with time, according to a new climate update issued by the World Meteorological Organization (WMO).

There is a 90% likelihood of at least one year between 2021-2025 becoming the warmest on record, which would dislodge 2016 from the top ranking, according to the Global Annual to Decadal Climate Update, produced by the United Kingdom’s Met Office, the WMO lead centre for such predictions.

Over 2021-2025, high-latitude regions and the Sahel are likely to be wetter and there is an increased chance of more tropical cyclones in the Atlantic compared to the recent past (defined as the 1981-2010 average).

The annual update harnesses the expertise of internationally acclaimed climate scientists and the best prediction systems from leading climate centres around the world to produce actionable information for decision-makers.

“This study shows – with a high level of scientific skill – that we are getting measurably and inexorably closer to the lower target of the Paris Agreement on Climate Change. It is yet another wakeup call that the world needs to fast-track commitments to slash greenhouse gas emissions and achieve carbon neutrality,” said Prof. Taalas. “Technological advances now make it possible to track greenhouse gas emissions back to their sources as a means of precisely targeting reduction efforts,” he noted.

“It is also underlines the need for climate adaptation. Only half of 193 WMO Members have state of the art early warning services.  Countries should continue to develop the services that will be needed to support adaptation in climate-sensitive sectors – such as health, water, agriculture and renewable energy – and promote early warning systems that reduce the adverse impacts of extreme events. Besides limitations in early warning services we are having severe gaps in weather observations especially in Africa and island states. This has a major negative impact on the accuracy if the early warnings in those areas and globally. We need to invest in the basic networks as well.” he concluded.

In 2020 – one of the three warmest years on record – the global average temperature was 1.2 °C above the pre-industrial baseline, according to the WMO’s report on the State of the Global Climate 2020, released in April. It highlighted the acceleration in climate change indicators like rising sea levels, melting sea ice, and extreme weather, as well as worsening impacts on socio-economic development.

The Global Annual to Decadal Climate Update confirms that trend. In the coming five years, the annual mean global temperature is likely to be at least 1°C warmer - within the range 0.9°C – 1.8°C - than preindustrial levels.

The chance of temporarily reaching 1.5°C has roughly doubled compared to last year’s predictions. This is mainly due to using an improved temperature dataset to estimate the baseline rather than sudden changes in climate indicators. It is very unlikely (10%) that the 5 year mean annual global temperature for the entire 2021-2025 period will be 1.5°C warmer than preindustrial levels, according to the climate update.

Professor Adam Scaife is the head of seasonal to decadal prediction at the Met Office. Commenting on the update, he said: “Assessing the increase in global temperature in the context of climate change refers to the long-term global average temperature, not to the averages for individual years or months. Nevertheless, a temporary exceedance of the 1.5 degree level may already be seen in the next few years.”

The Paris Agreement seeks to keep global temperature rise this century well below 2°C degrees Celsius above pre-industrial levels and to pursue efforts to limit the temperature increase even further to 1.5°C. National commitments to cut emissions, known as nationally determined contributions, currently fall far short of what is needed to achieve this target.

The year 2021, and the crucial climate change negotiations, COP26, in November, have been widely described as a “make-or-break” chance to prevent climate change spiralling ever more out of control. Tackling climate change is high on the agenda of the G-7 Leaders Summit hosted by the United Kingdom from 11-13 June.

The Global Annual to Decadal Climate Update takes into account natural variations as well as human influences on climate to provide the best possible forecasts of temperature, rainfall, wind patterns and other variables for the coming five years. The forecast models do not take into consideration changes in emissions of greenhouse gases and aerosols as a result of the coronavirus lockdown, the impacts of  which on atmospheric concentrations of greenhouse gases have been small to date, owing to the long lifetimes of many of these gases.

The development of near-term prediction capability was driven by the WMO co-sponsored World Climate Research Programme, which declared one of its overarching Grand Challenges is to support research and development to improve multi-year to decadal climate predictions and their utility to decision makers.

Comprehensive Assessment Reports about the state of scientific, technical and socio-economic knowledge on climate change, its impacts and future risks, and options for reducing the rate at which climate change is taking place are the responsibility of the Intergovernmental Panel on Climate Change (IPCC), which also issued a Special Report on Global Warming of 1.5°C. 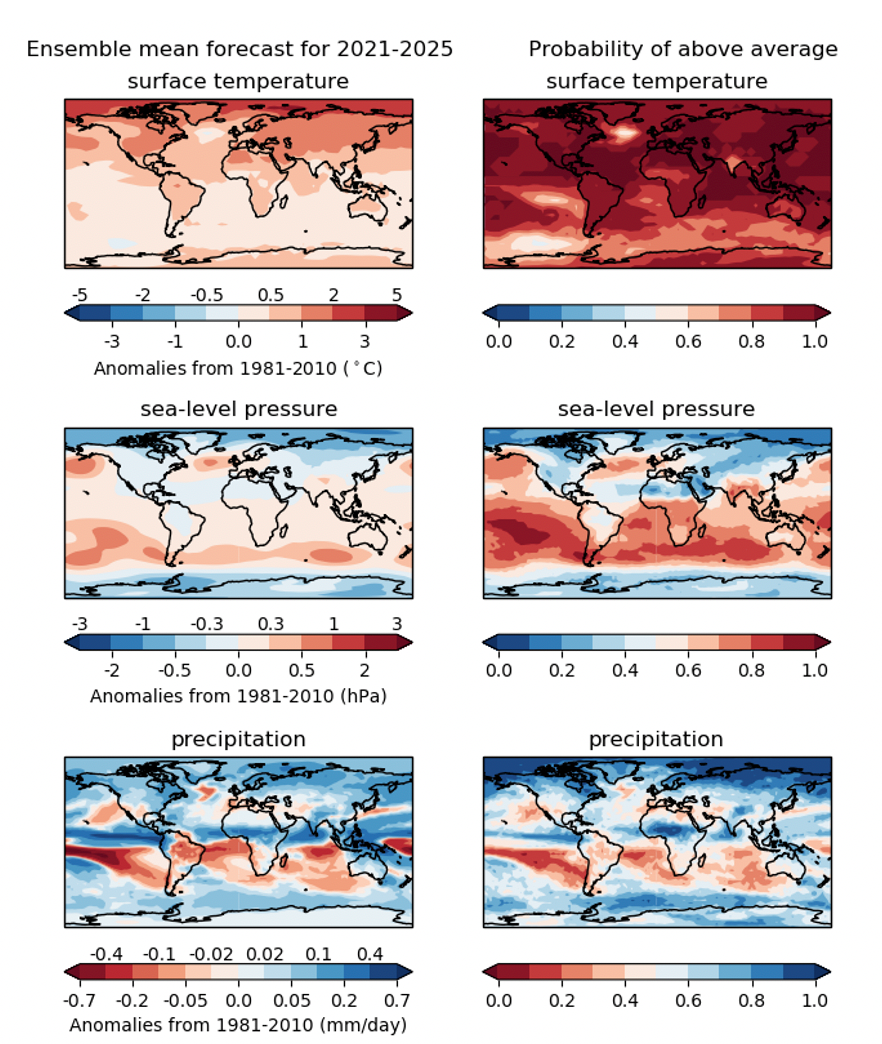