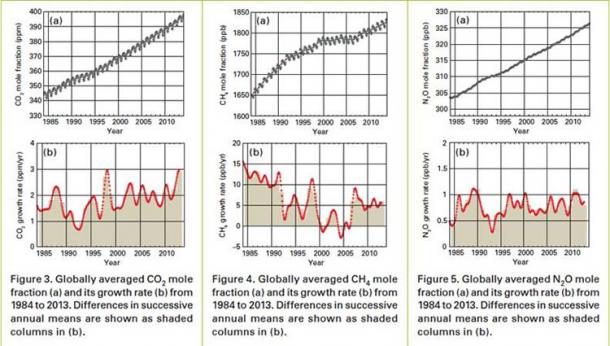 Geneva, 9 September 2014 (WMO) – The amount of greenhouse gases in the atmosphere reached a new record high in 2013, propelled by a surge in levels of carbon dioxide.  This is according to the World Meteorological Organization’s annual Greenhouse Gas Bulletin, which injected even greater urgency into the need for concerted international action against accelerating and potentially devastating climate change.

The Greenhouse Gas Bulletin showed that between 1990 and 2013 there was a 34% increase in radiative forcing – the warming effect on our climate – because of long-lived greenhouse gases such as carbon dioxide (CO2), methane and nitrous oxide.

The observations from WMO’s Global Atmosphere Watch (GAW) network showed that CO2 levels increased more between 2012 and 2013 than during any other year since 1984. Preliminary data indicated that this was possibly related to reduced CO2 uptake by the earth’s biosphere in addition to the steadily increasing CO2 emissions.

The ocean cushions the increase in CO2 that would otherwise occur in the atmosphere, but with far-reaching impacts. The current rate of ocean acidification appears unprecedented at least over the last 300 million years, according to an analysis in the report.

“We know without any doubt that our climate is changing and our weather is becoming more extreme due to human activities such as the burning of fossil fuels,” said WMO Secretary-General Michel Jarraud.

“The Greenhouse Gas Bulletin shows that, far from falling, the concentration of carbon dioxide in the atmosphere actually increased last year at the fastest rate for nearly 30 years. We must reverse this trend by cutting emissions of CO2 and other greenhouse gases across the board,” he said. “We are running out of time.”

“Carbon dioxide remains in the atmosphere for many hundreds of years and in the ocean for even longer. Past, present and future CO2 emissions will have a cumulative impact on both global warming and ocean acidification. The laws of physics are non-negotiable,” said Mr Jarraud.

“The Greenhouse Gas Bulletin provides a scientific base for decision-making. We have the knowledge and we have the tools for action to try keep temperature increases within 2°C to give our planet a chance and to give our children and grandchildren a future. Pleading ignorance can no longer be an excuse for not acting,” said Mr Jarraud.

"The inclusion of a section on ocean acidification in this issue of WMO’s Greenhouse Gas Bulletin is appropriate and needed. It is high time the ocean, as the primary driver of the planet’s climate and attenuator of climate change, becomesa central part of climate change discussions,” said Wendy Watson-Wright, Executive Secretary of the Intergovernmental Oceanographic Commission of UNESCO.

“If global warming is not a strong enough reason to cut CO2 emissions, ocean acidification should be, since its effects are already being felt and will increase for many decades to come. I echo WMO Secretary General Jarraud’s concern – we ARE running out of time,” she said.

Carbon dioxide accounted for 80% of the 34% increase in radiative forcing by long-lived greenhouse gases from 1990 to 2013, according to the U.S. National Oceanic and Atmospheric Administration (NOAA) Annual Greenhouse Gas Index.

Methane is the second most important long-lived greenhouse gas. Approximately 40% of methane is emitted into the atmosphere by natural sources (e.g., wetlands and termites), and about 60 % comes from human activities like cattle breeding, rice agriculture, fossil fuel exploitation, landfills and biomass burning. Atmospheric methane reached a new high of about 1824 parts per billion (ppb) in 2013, due to increased emissions from anthropogenic sources. Since 2007, atmospheric methane has been increasing again after a temporary period of leveling-off.

Nitrous oxide is emitted into the atmosphere from both natural (about 60%) and anthropogenic sources (approximately 40%), including oceans, soil, biomass burning, fertilizer use, and various industrial processes. Its atmospheric concentration in 2013 was about 325.9 parts per billion. Its impact on climate, over a 100-year period, is 298 times greater than equal emissions of carbon dioxide. It also plays an important role in the destruction of the stratospheric ozone layer which protects us from the harmful ultraviolet rays of the sun.

The ocean currently absorbs one-fourth of anthropogenic CO2 emissions, reducing the increase in atmospheric CO2 that would otherwise occur because of fossil fuel combustion. Enhanced ocean CO2 uptake alters the marine carbonate system and lead to increasing acidity. The ocean's acidity increase is already measurable as oceans take up about 4 kilogrammes of CO2 per day per person.

The current rate of ocean acidification appears unprecedented at least over the last 300 million years, based on proxy-data from paleo archives. In the future, acidification will continue to accelerate at least until mid-century, based on projections from Earth system models.

The potential consequences of ocean acidification on marine organisms are complex. A major concern is the response of calcifying organisms, such as corals, algae, mollusks and some plankton, because their ability to build shell or skeletal material (via calcification) depends on the abundance of carbonate ion. For many organisms, calcification declines with increased acidification. Other impacts of acidification include reduced survival, development, and growth rates as well as changes in physiological functions and reduced biodiversity. 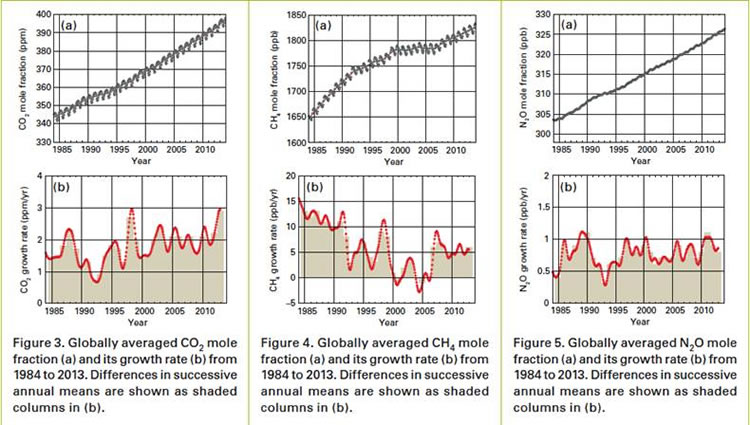