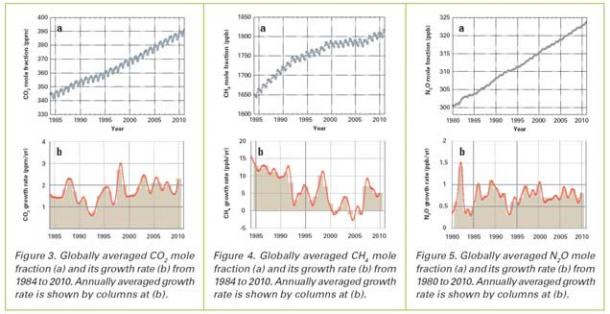 GENEVA, 21 November 2011 (WMO) –The amount of greenhouse gases in the atmosphere reached a new high in 2010 since pre-industrial time and the rate of increase has accelerated, according to the World Meteorological Organization’s Greenhouse Gas Bulletin. It focussed special attention on rising nitrous oxide concentrations.

Between 1990 and 2010, according to the report, there was a 29% increase in radiative forcing - the warming effect on our climate system - from greenhouse gases. Carbon dioxide accounted for 80% of this increase.

“The atmospheric burden of greenhouse gases due to human activities has yet again reached record levels since pre-industrial time,” said WMO Secretary-General Michel Jarraud. “Even if we managed to halt our greenhouse gas emissions today – and this is far from the case – they would continue to linger in the atmosphere for decades to come and so continue to affect the delicate balance of our living planet and our climate.”

“Now more than ever before, we need to understand the complex, and sometimes unexpected, interactions between greenhouse gases in the atmosphere, Earth’s biosphere and oceans. WMO will continue to collect data to further our scientific knowledge through its Global Atmosphere Watch network spanning more than 50 countries, including stations high in the Andes and Himalayas, in the remote expanses of Alaska and in the far South Pacific,” he said.

Greenhouse gases trap radiation within the Earth’s atmosphere causing it to warm. Human activities, such as fossil fuel burning and agriculture, are major emitters of greenhouse gases which are drivers of climate change. After water vapour, the three most prevalent long-lived greenhouse gases are carbon dioxide, methane and nitrous oxide.

Carbon dioxide (CO2) is the single most important man-made greenhouse gas in the atmosphere and contributes about 64% to total increase in climate forcing by greenhouse gases. Since the start of the industrial era in 1750, its atmospheric abundance has increased by 39% to 389 parts per million (number of molecules of the gas per million molecules of dry air). This is primarily because of emissions from combustion of fossil fuels, deforestation and changes in land-use.

For about 10,000 years before the start of the industrial era in the mid-18th century, atmospheric carbon dioxide remained almost constant at around 280 parts per million.

Methane (CH4) contributes about 18% to the overall global increase in radiative forcing since 1750 and is the second most important greenhouse gas after carbon dioxide.

Before the start of the industrial era, atmospheric methane was about 700 parts per billion (number of molecules of the gas per billion molecules of dry air) Since 1750, it has increased 158%, mostly because of activities such as cattle-rearing, rice planting, fossil fuel exploitation and landfills. Human activities now account for 60% of methane emissions, with the remaining 40% being from natural sources such as wetlands.

After a period of temporary relative stabilization from 1999 to 2006, atmospheric methane has again risen. Scientists are conducting research into the reasons for this, including the potential role of the thawing of the methane-rich Northern permafrost and increased emissions from tropical wetlands.

Nitrous oxide (N2O) contributes about 6% to the overall global increase in radiative forcing since 1750. It is emitted into the atmosphere from natural and man-made sources, including the oceans, biomass burning, fertilizer use and various industrial processes. It is now the third most important greenhouse gas.

The atmospheric burden of nitrous oxide in 2010 was 323.2 parts per billion - 20% higher than in the pre-industrial era. It has grown at an average of about 0.75 parts per billion over the past ten years, mainly as a result of the use of nitrogen containing fertilizers, including manure, which has profoundly affected the global nitrogen cycle.

Its impact on climate, over a 100 year period, is 298 times greater than equal emissions of carbon dioxide. It also plays an important role in the destruction of the stratospheric ozone layer which protects us from the harmful ultraviolet rays of the sun.

Other greenhouse gases: The combined radiative forcing by halocarbons is 12%. Some halocarbons such as chlorofluorocarbons (CFCs), previously used as refrigerants, as propellants in spray cans and as solvents, are decreasing slowly as a result of international action to preserve the Earth’s protective ozone layer.

However, concentrations of other gases such as HCFCs and HFCs, which are used to substitute CFCs because they are less damaging to the ozone layer, are increasing rapidly. These two classes of compounds are very potent greenhouse gases and last much longer in the atmosphere than carbon dioxide.

WMO, through its Global Atmosphere Watch Programme, coordinates the observations of greenhouse gases in the atmosphere through a network of stations located in more than 50 countries. The measurement data are quality controlled, archived and distributed by WMO’s World Data Centre for Greenhouse Gases, hosted by the Japan Meteorological Agency (JMA).

The new Greenhouse Gas Bulletin is the seventh in the series, which began in 2004. This bulletin reports the atmospheric burdens and rates of change of the most important long-lived greenhouse gases – carbon dioxide, methane, nitrous oxide, CFC-12 and CFC-11 – and provides a summary of the contributions of the lesser gases. 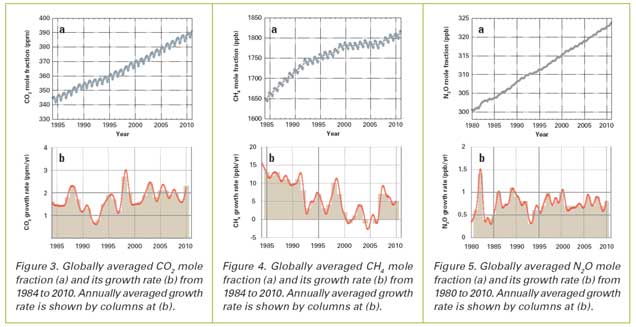 The Intergovernmental Panel on Climate Change defines radiative forcing as a measure of the influence a factor has in altering the balance of incoming and outgoing energy in the Earth-atmosphere system and is an index of the importance of the factor as a potential climate change mechanism. Radiative forcing values are often expressed in watts per square meter.

The Greenhouse Gas Bulletin, translated in all UN languages, as well as earlier issues, are available through the WMO Global Atmosphere Watch Programme Web page at the following URL: http://www.wmo.int/gaw