GENEVA/DOHA, 28 November 2012 (WMO) – The years 2001–2011 were all among the  warmest on record, and, according to the World Meteorological Organization, the first ten months indicate that 2012 will most likely be no exception despite the cooling influence of La Niña early in the year.

WMO’s provisional annual statement on the state of the global climate also highlighted the unprecedented melt of the Arctic sea ice and multiple weather and climate extremes which affected many parts of the world. It was released today to inform negotiators at the United Nations Climate Change Conference in Doha, Qatar.

January-October 2012 has been the ninth warmest such period since records began in 1850. The global land and ocean surface temperature for the period was about 0.45°C (0.81°F) above the corresponding 1961–1990 average of 14.2°C, according to the statement.

The year began with a weak-to-moderate strength La Niña, which had developed in October 2011. The presence of a La Niña during the start of a year tends to have a cooling influence on global temperatures, and this year was no different. After the end of the La Niña in April 2012, the global land and ocean temperatures rose increasingly above the long-term average with each consecutive month. The six-month average of May–October 2012 was among the four warmest such periods on record.

“Naturally occurring climate variability due to phenomena such as El Niño and La Niña impact on temperatures and precipitation on a seasonal to annual scale. But they do not alter the underlying long-term trend of rising temperatures due to climate change as a result of human activities,” said WMO Secretary-General Michel Jarraud.

“The extent of Arctic sea ice reached a new record low. The alarming rate of its melt this year highlighted the far-reaching changes taking place on Earth’s oceans and biosphere.  Climate change is taking place before our eyes and will continue to do so as a result of the concentrations of greenhouse gases in the atmosphere, which have risen constantly and again reached new records,” added Mr Jarraud.

WMO will release a 10-year report on the state of the climate, “2001-2010, A Decade of Extremes” on 4 December 2012. It was produced in partnership with other United Nations and international agencies and highlights the warming trend for the entire planet, its continents and oceans during the past decade, with an indication of its impacts on health, food security and socio-economic development.

During the first ten months of 2012, above-average temperatures affected most of the globe’s land surface areas, most notably North America (warmest on record for contiguous United States of America), southern Europe, western and central Russia and northwestern Asia. Much of South America and Africa experienced above average temperatures during the first ten months of the year, with the most anomalous warmth across parts of northern Argentina and northern Africa. Much of Asia had above-average temperatures, with cooler-than-average conditions across parts of northern China. South Asia and the Pacific were also predominantly warmer than normal, except for Australia.

Extremes: Notable extreme events were observed worldwide, but some parts of the Northern Hemisphere were affected by multiple extremes during January–October 2012.

Tropical Cyclones: Global tropical cyclone activity for the first ten months was near the 1981–2010 average of 85 storms, with a total of 81 storms (wind speeds greater or equal than 34 knots, or 63 kilometers per hour).  The Atlantic basin experienced an above-average hurricane season for a third consecutive year with a total of 19 storms, with ten reaching hurricane status, the most notably being Sandy, which wreaked havoc across the Caribbean and the USA East Coast. Throughout the year, East Asia was severely impacted by powerful typhoons. Typhoon Sanba was the strongest cyclone, globally, to have formed in 2012. Sanba impacted the Philippines, Japan, and the Korean Peninsula, dumping torrential rain and triggering floods and landslides that affected thousands of people and caused millions in U.S. dollars in damage.

The provisional statement is being released at the 18th Conference of the Parties to the United Nations Framework Convention on Climate Change, taking place in Doha, Qatar. Final updates and figures for 2012 will be published in March 2013. It is based on climate data from networks of land-based weather and climate stations, ships and buoys, as well as satellites. The WMO global temperature analysis is thus principally based on three complementary datasets. One is the combined dataset maintained by both the Hadley Centre of the UK Met Office and the Climatic Research Unit, University of East Anglia, United Kingdom. Another dataset is maintained by the National Oceanic and Atmospheric Administration (NOAA), and the third one is from the Goddard Institute of Space Studies (GISS) operated by the National Aeronautics and Space Administration (NASA). Additional information is drawn from the ERA-Interim reanalysis-based data set maintained by the European Centre for Medium-Range Weather Forecasts (ECMWF). 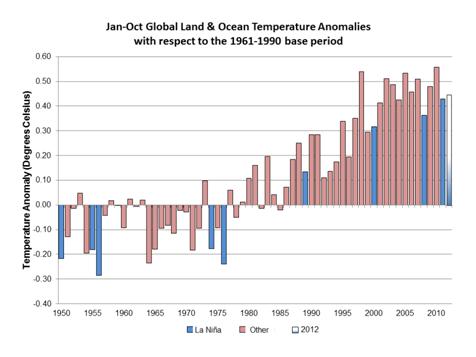