GENEVA 3 July 2013 - The world experienced unprecedented high-impact climate extremes during the 2001-2010 decade, which was the warmest since the start of modern measurements in 1850 and continued an extended period of pronounced global warming. More national temperature records were reported broken than in any previous decade, according to a new report by the World Meteorological Organization (WMO).

The report, The Global Climate 2001-2010, A Decade of Climate Extremes, analysed global and regional temperatures and precipitation, as well as extreme events such as the heat waves in Europe and Russia, Hurricane Katrina in the United States of America, Tropical Cyclone Nargis in Myanmar, droughts in the Amazon Basin, Australia and East Africa and floods in Pakistan.

The decade was the warmest for both hemispheres and for both land and ocean surface temperatures. The record warmth was accompanied by a rapid decline in Arctic sea ice, and accelerating loss of net mass from the Greenland and Antarctic ice sheets and from the world’s glaciers. As a result of this widespread melting and the thermal expansion of sea water, global mean sea levels rose about 3 millimetres (mm) per year, about double the observed 20th century trend of 1.6 mm per year. Global sea level averaged over the decade was about 20 cm higher than that of 1880, according to the report.

“A decade is the minimum possible timeframe for meaningful assessments of climate change,” said WMO Secretary-General Michel Jarraud.  “WMO’s report shows that global warming was significant from 1971 to 2010 and that the decadal rate of increase between 1991-2000 and 2001-2010 was unprecedented.  Rising concentrations of heat-trapping greenhouse gases are changing our climate, with far reaching implications for our environment and our oceans, which are absorbing both carbon dioxide and heat.”

“Natural climate variability, caused in part by interactions between our atmosphere and oceans – as evidenced by El Niño and La Niña events - means that some years are cooler than others. On an annual basis, the global temperature curve is not a smooth one. On a long-term basis the underlying trend is clearly in an upward direction, more so in recent times” said Mr Jarraud.

Between 2001 and 2010, there was no major El Niño event, which normally leads to higher temperatures (as occurred in the then-record warm year of 1998). Much of the decade experienced either cooling La Niña or neutral conditions, except for the 2009/2010 moderate to strong El Niño.

The 100-page report and an executive summary, incorporating findings from a unique survey of 139 National Meteorological and Hydrological Services and socio-economic data and analysis from several UN agencies and partners, were released to coincide with the first session of the Intergovernmental Board on Climate Services. This Board is overseeing the implementation of the Global Framework for Climate Services – an international initiative to improve and expand scientifically-based climate information to help society cope with the natural variability of our climate and human induced climate change.

‘“A decadal perspective makes it possible to assess trends in the climate system and anticipate the future. It can also inform efforts to develop operational climate services that provide information and forecasts for decision-making in agriculture, health, disaster risk, water resources and other sectors. These efforts are being coordinated through the WMO-led Global Framework for Climate Services,” said Mr Jarraud.

“Climate services are more necessary than ever to help us cope with global changes in our climate, which are accentuated at regional and national scales.  Despite the significant decrease in casualties due to severe storms and flooding, the WMO report highlighted an alarming impact on health and mortality rates caused by the European and Russian heat-waves. Given that climate change is expected to lead to more frequent and intense heat-waves, we need to be prepared,‘’  said Mr. Jarraud.

Above-average temperatures were observed over most parts of the globe in 2001-2010. This was particularly marked in the higher latitudes of the northern hemisphere. Greenland recorded the largest decadal temperature anomaly, at +1.71°C above the long-term average and with a temperature in 2010 of +3.2°C above average.  Africa experienced warmer than normal conditions in every year of the decade.

Results from WMO’s survey showed that nearly 94% of reporting countries had their warmest decade in 2001-2010 and no country reported a nationwide average decadal temperature anomaly cooler than  the long term average.

Precipitation and floods: The 2001-2010 decade was the second wettest since 1901. Globally, 2010 was the wettest year since the start of instrumental records.

Most parts of the globe had above-normal precipitation during the decade. The eastern USA, northern and eastern Canada, and many parts of Europe and central Asia were particularly wet.

According to the WMO survey, floods were the most frequently experienced extreme events over the course of the decade. Eastern Europe was particularly affected in 2001 and 2005, India in 2005, Africa in 2008, Asia (notably Pakistan, where 2 000 people died and 20 million were affected) in 2010, and Australia, also in 2010.

Droughts affect more people than any other kind of natural hazards owing to their large scale and long-lasting nature. The decade 2001–2010 saw droughts occur in all parts of the world. Some of the highest-impact and long-term droughts struck Australia (in 2002 and other years), East Africa (2004 and 2005, resulting in widespread loss of life) and the Amazon Basin (2010) with negative environmental impacts.

Tropical cyclones: Between 2001 and 2010, there were 511 tropical cyclone related events which resulted in a total of nearly 170,000 persons reported killed, over 250 million people reported affected and estimated economic damages of US$ 380 billion.

According to the U.S. National Oceanic and Atmospheric Administration, 2001-2010 was the most active decade since 1855 in terms of tropical cyclone activity in the North Atlantic Basin. An average of 15 named storms per year was recorded, well above the long-term average of 12.

The North Indian Ocean saw the deadliest tropical cyclone recorded during the decade, when Tropical Cyclone Nargis struck Myanmar in early May 2008. More than 138 000 people were reported killed or missing, eight million people were affected and thousands of homes were destroyed.

On the other hand, there was a 16% decline in deaths due to storms and 43% decline in deaths from floods, thanks mainly to better early warning systems and increased preparedness and despite an increase in populations in disaster-prone areas.

According to the 2011 Global Assessment Report, the average population exposed to flooding every year increased by 114% globally between 1970 and 2010, a period in which the world’s population increased by 87% from 3.7 billion to 6.9 billion. The number of people exposed to severe storms almost tripled in cyclone-prone areas, increasing by 192%, in the same period.

Much research is being conducted into whether it is possible to attribute individual extreme events to climate change rather than natural variability. Scientists increasingly conclude that the likelihood of an event such as the 2003 European heat wave was probably substantially increased by rising global temperatures. It is therefore important to develop this research to strengthen climate science and to use it to improve climate services to help society adapt to climate change. 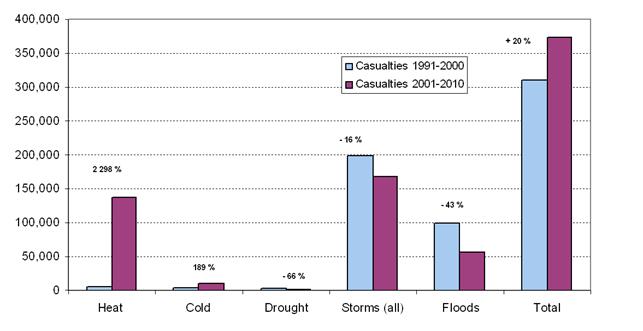 Notes to Editors: Climate data and information used in this report was provided by a number of international, regional and national institutions. Most of the data on impacts caused by extreme events was provided by the Centre for Research on the Epidemiology of Disasters. Details on data sources, contributors and references are included in the full report