No. 981 -Provisional Statement on Status of Climate in 2013: Continuing high temperatures globally and many climate extremes worldwide 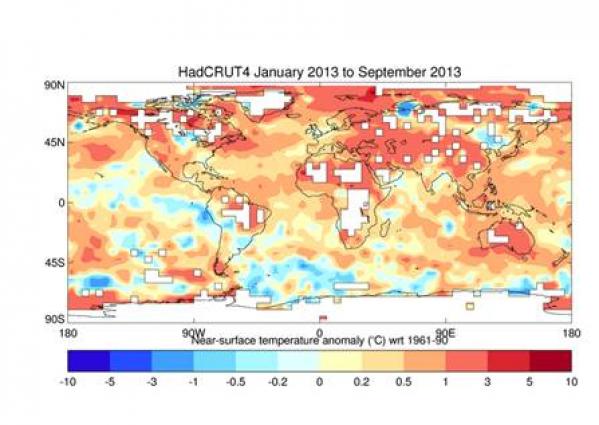 No. 981 -Provisional Statement on Status of Climate in 2013: Continuing high temperatures globally and many climate extremes worldwide

Provisional Statement on Status of Climate in 2013:

Geneva, 13 November 2013  - The year 2013 is currently on course to be among the top ten warmest years since modern records began in 1850, according to the World Meteorological Organization. The first nine months, January to September, tied with 2003 as the seventh warmest such period on record, with a global land and ocean surface temperature of about 0.48°C (0.86°F) above the 1961–1990 average.

WMO’s provisional annual statement on the Status of the Global Climate 2013 provides a snapshot of regional and national temperatures. It also includes details on precipitation, floods, droughts, tropical cyclones, ice cover and sea-level. The statement was released today to inform negotiators at the United Nations climate change conference in Warsaw, Poland.

January-September 2013 was warmer than the same period in both 2011 and 2012, when La Niña  had a cooling influence. Neither La Niña nor El Niño conditions were present during the first nine months of 2013 and are not expected to emerge by the end of the year.  El Niño/La Niña is a major driver of our climate and the hottest years on record, 2010 and 1998, both had El Niño events.

In contrast with 2012, when the United States, in particular, observed record high annual temperatures, the warmth in 2013 was most extreme in Australia.

“Temperatures so far this year are about the same as the average during 2001-2010, which was the warmest decade on record,” said WMO Secretary-General Michel Jarraud. “All of the warmest years have been since 1998 and this year once again continues the underlying, long-term trend The coldest years now are warmer than the hottest years before 1998,” he said.

“Atmospheric concentrations of carbon dioxide and other greenhouse gases reached new highs in 2012, and we expect them to reach unprecedented levels yet again in 2013. This means that we are committed to a warmer future,” added Mr Jarraud.

“Surface temperatures are only part of the wider picture of our changing climate. The impact on our water cycle is already becoming apparent – as manifested by droughts, floods and extreme precipitation.”

“The Philippines is reeling from the devastation wreaked by Typhoon Haiyan (Yolanda), the most powerful tropical cyclone ever to hit the country and one of the most intense ever recorded anywhere. It is still struggling to recover from Typhoon Bopha (Pablo) one year ago. Although individual tropical cyclones cannot be directly attributed to climate change, higher sea levels are already making coastal populations more vulnerable to storm surges. We saw this with tragic consequences in the Philippines,” said Mr Jarraud. He added that, although the relationship between climate change and the frequency of tropical cyclones is a matter of much research, it is expected that their impact will be more intense.

The provisional WMO statement confirms that global sea level reached a new record high. Sea level has been rising at an average rate of about 3.2 milimeters per year (mm/yr), with inter-annual variability, since altimeter satellite measurements began in 1993. This is close to the observed rate of about 3 mm/yr of the most recent decade of 2001−2010 and double the observed 20th century trend of 1.6 mm/yr.

“Sea levels will continue to rise because of melting ice caps and glaciers. More than 90% of the extra heat we are generating from greenhouse gas is absorbed by the oceans, which will consequently continue to warm and expand for hundreds of years,” said Mr Jarraud.

Arctic sea ice recovered slightly after the dramatic and unprecedented melt in 2012, but 2013 still saw one of the lowest levels on record. Since the beginning of satellite measurements in 1979, the decade 2001−2010 has seen the greatest average annual melting of Arctic sea ice on record and all seven of the lowest Arctic sea ice extents have occurred since 2007.

Arctic sea ice extent reached its annual maximum on 15 March at 15.13 million square kilometers, according to the U.S. National Snow and Ice Data Center. This was approximately 0.5 million square kilometers below the 1981–2010 average. According to the University of Colorado-Boulder (USA), ice that is more than four years old has decreased from 18 per cent of the March peak ice cover in 1984 to 3 per cent in 2013 – evidence of a faster melt rate.

The Arctic reached its lowest sea ice extent in its annual cycle on 13 September, at 5.10 million square kilometers, the sixth smallest on record. This was 18 per cent, or nearly 1.1 million square kilometers, below the 1981–2010 average minimum. However, it was higher than the record low of 3.41 million square kilometers of September 2012. During June−August 2013, lower-than-average atmospheric pressure dominated over much of the Arctic Ocean, which limited heat transport from the south and brought more cloud cover, contributing to lower temperatures compared to the previous year. The associated winds also caused the ice cover to spread out and cover a larger area.

For the second year in a row, Antarctic sea ice extent in September reached a record maximum of 19.47 million square kilometers according to NSIDC. This is approximately 30,000 kilometers larger than the previous record set in 2012, and is 2.6 per cent higher than the 1981−2010 average.

September Antarctic sea ice extent is increasing at an average rate of 1.1 per cent per decade. The changes in the atmospheric circulation observed in the past three decades, which resulted in changes in the prevailing winds around Antarctica, are considered by scientists as factors related to this increase. However, it is possible that this increase is due to a combination of factors that also include effects of changing ocean circulation.

During the first nine months of 2013, most of the world’s land areas had above-average temperatures, most notably in Australia northern North America, northeastern South America, northern Africa, and much of Eurasia. Cooler-than-average temperatures were observed across a concentrated region of North America, central South America and the eastern Pacific Ocean waters off the coast of Ecuador, a small region of northern Russia, and parts of northeastern Asia.

The Arctic Oscillation was a major driver of weather patterns during early 2013 across the Northern Hemisphere, bringing cooler-than-average spring temperatures to much of Europe, the south-east United States, north-west Russia, and parts of Japan. The Arctic region in contrast was considerably warmer than average. This so-called warm Arctic-cold continents pattern is characteristic of the negative phase of the Arctic Oscillation, which causes cold Arctic air to flow to lower latitudes.

Temperatures across North America were above average during 2013, but more moderate than 2012. In South America, temperatures were near to above average. This includes Argentina, which had record warmth in 2012.

In the South-west Pacific, Australia reported its hottest month ever observed in January 2013, leading to the hottest summer (December−February) on record. On 7 January a new national area-averaged daily maximum temperature of 40.3°C was set, and Moomba in South Australia, reached 49.6°C.  Warmer-than-average temperatures continued through the year and the country recorded its all-time warmest 12-month period from November 2012−October 2013.

In Asia, Japan had its hottest summer on record. China recorded its warmest August on record (tied with 2006). South Korea observed its 4th warmest July and warmest August, contributing to a record-high summer temperature.

For the first ten months of 2013, there was below-average rainfall across the western United States. During 9–16 September, there was record-breaking precipitation in Boulder, Colorado, with widespread flooding. Parts of Mexico experienced above average rainfall due to tropical cyclones .

In South America, much-below-average rainfall was recorded in northeastern Brazil, where parts of the region suffered their worst drought in the past half century in early 2013. The Brazilian Plateau, the core monsoon region in South America experienced its largest rainfall deficit since records began in 1979.

Extreme precipitation in Germany, Poland, Czech Republic, Austria, and Switzerland caused the most intense and extended flooding in late May and early June in the Danube and Elbe river catchments since at least 1950.

The southern African countries of Angola and Namibia were gripped by one of the worst droughts in the past 30 years. An active West-African summer monsoon season (July−September) brought average to above-average rainfall over most of central and western parts of the Sahel.

Large areas in south west Asia including India, Pakistan, and western China experienced above-average rainfall due to the active Southwest Asian monsoon, which was one of the longest on record. The monsoon season had an early onset and brought the worst flooding and devastation in the past half century to regions near the India-Nepal border.

From the end of July to mid-August 2013, unusually heavy rain fell near theAmur River, which marks the border between China and Russia. The river reached a record level, surpassing the previous high set in 1984, as heavy flooding hit parts of the region.

Along with extreme heat, most of Australia had drier-than-average conditions throughout the year. With little significant rainfall in northern and eastern parts of New Zealand since October 2012, by early 2013 the country was suffering its worst drought in decades.

In the North Atlantic, with the season officially ending on 30 November, there have been a total of 12 named storms, compared to the 1981?2010 seasonal average of 12 storms.

The Eastern North Pacific basin had above-average hurricane activity in 2013. There were a total of 17 storms, eight of which intensified to hurricane status, and one (Raymond) became a major hurricane.

Two tropical cyclones from two separate basins (Ingrid in the North Atlantic and Manuel in the Eastern North Pacific) struck Mexico nearly simultaneously on 15 September, an unusual event that last occurred in 1958. In total, 24 of Mexico’s 31 states were impacted.

As of early November, the Western North Pacific typhoon season recorded 30 storms, including 13 typhoons, above the 1981−2010 average of 26. Typhoon Haianan (known in the Philippines as Yolanda) was one of the most intense tropical cyclones ever to make landfall, and the most powerful cyclone of the year, cutting a devastating trail through the Philippines and seriously impacting on Viet Nam.

The North Indian Ocean had a below-average season with only two tropical cyclones compared with the 1981−2010 average of four. Phailin evolved into the strongest storm in the North Indian basin since 1999. Improved meteorological early warning systems and preparedness were credited with avoiding a major humanitarian disaster.

The provisional statement is being released at the 19th Conference of the Parties to the United Nations Framework Convention on Climate Change, taking place in Warsaw, Poland. Final updates and figures for 2013 will be published in March 2014. Temperatures are from January to September, but data on tropical cyclones is up to October 2013. The WMO global temperature analysis is principally based on three complementary datasets maintained by the Hadley Centre of the UK Met Office and the Climatic Research Unit, University of East Anglia, United Kingdom (combined); the National Oceanic and Atmospheric Administration (NOAA) National Climatic Data Centre; and the Goddard Institute of Space Studies (GISS) operated by the National Aeronautics and Space Administration (NASA). Additional information is drawn from the ERA-Interim reanalysis-based data set maintained by the European Centre for Medium-Range Weather Forecasts (ECMWF). 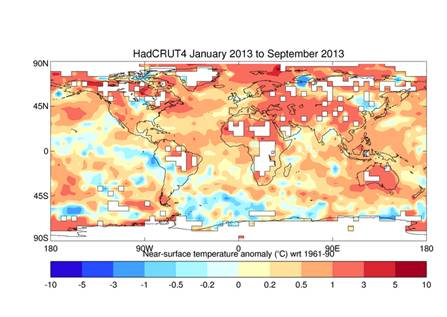 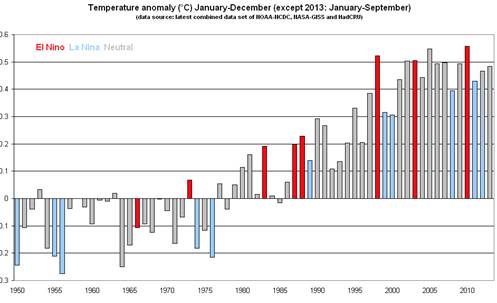 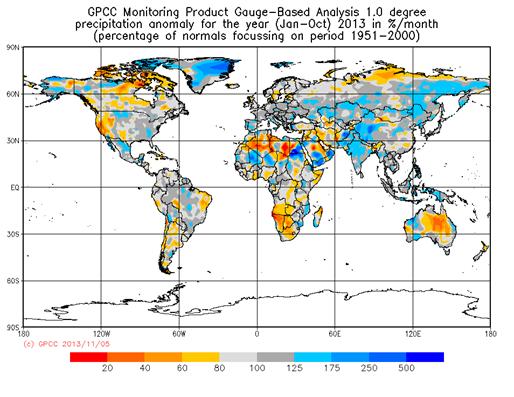 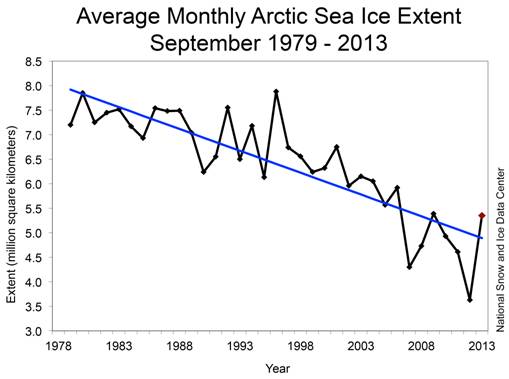