State of Climate in 2017 – Extreme weather and high impacts

State of Climate in 2017 – Extreme weather and high impacts

The very active North Atlantic hurricane season, major monsoon floods in the Indian subcontinent, and continuing severe drought in parts of east Africa contributed to 2017 being the most expensive year on record for severe weather and climate events.

The high impact of extreme weather on economic development, food security, health and migration was highlighted in the WMO Statement on the State of the Global Climate in 2017. Compiled by the World Meteorological Organization with input from national meteorological services and United Nations partners, the report provides detailed information to support the international agenda on disaster risk reduction, sustainable development and climate change.

The Statement, now in its 25th year, was published for World Meteorological Day on 23 March. It confirmed that 2017 was one of the three warmest years on record and the warmest not influenced by an El Niño event. It also examined other long-term indicators of climate change such as increasing carbon dioxide concentrations, sea level rise, shrinking sea ice, ocean heat and ocean acidification. 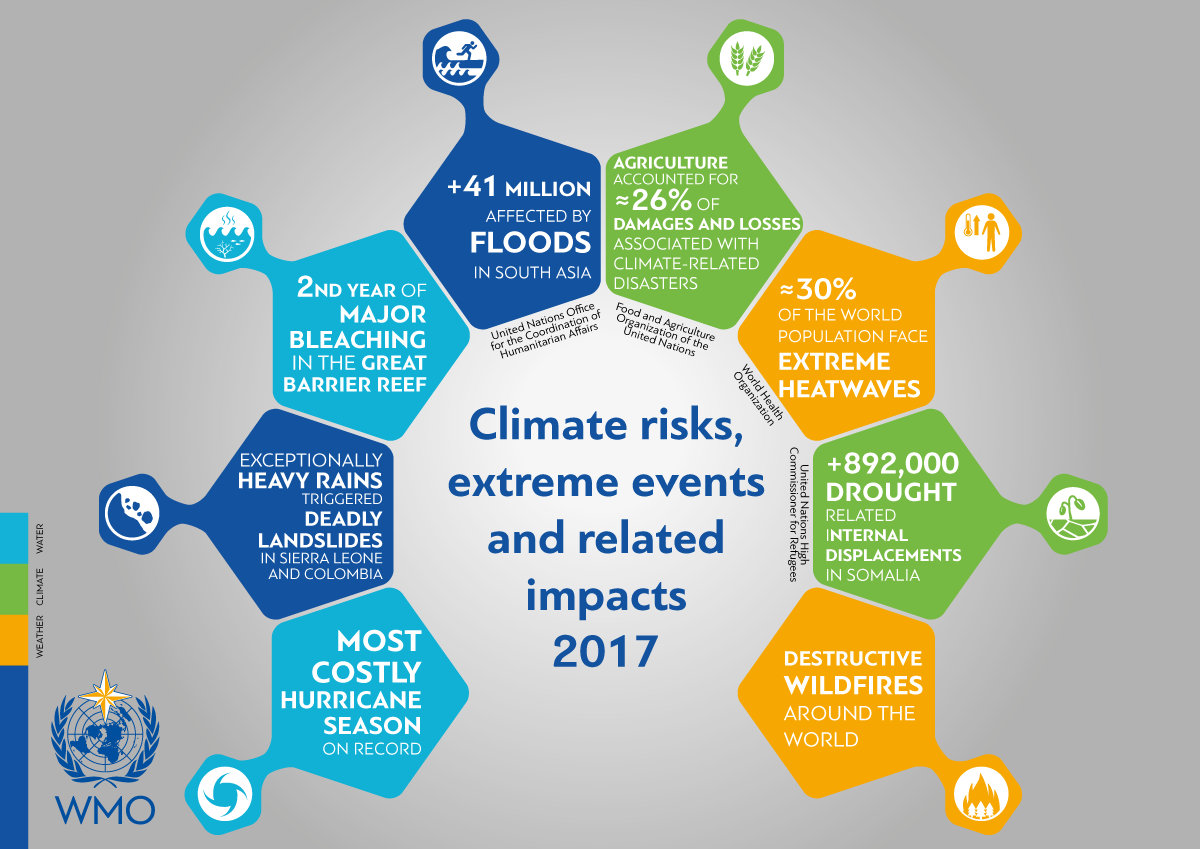 “The start of 2018 has continued where 2017 left off – with extreme weather claiming lives and destroying livelihoods. The Arctic experienced unusually high temperatures, whilst densely populated areas in the northern hemisphere were gripped by bitter cold and damaging winter storms. Australia and Argentina suffered extreme heatwaves, whilst drought continued in Kenya and Somalia, and the South African city of Cape Town struggled with acute water shortages,” said WMO Secretary-General Petteri Taalas.

“Since the inaugural Statement on the State of the Global Climate, in 1993, scientific understanding of our complex climate system has progressed rapidly. This includes our ability to document the occurrence of extreme weather and climate events, the degree to which they can be attributed to human influences, and the correlation of climate change with epidemics and vector-borne diseases,” said Mr Taalas.

“In the past quarter of a century, atmospheric concentrations of carbon dioxide have risen from 360 parts per million to more than 400 ppm. They will remain above that level for generations to come, committing our planet to a warmer future, with more weather, climate and water extremes,” said Mr Taalas.

Direct measurements of atmospheric CO2 over the past 800 000 years showed natural variations between 180 and 280 ppm. “This demonstrates that today’s CO2 concentration of 400 ppm exceeds the natural variability seen over hundreds of thousands of years, “ said the Statement.

2017 was a particularly severe year for disasters with high economic impacts. Munich Re assessed total disaster losses from weather and climate-related events in 2017 at US$ 320 billion, the largest annual total on record (after adjustment for inflation).

Fuelled by warm sea surface temperatures, the North Atlantic hurricane season was the costliest ever for the United States and eradicated decades of developments gains in small islands in the Caribbean such as Dominica.  The National Centers for Environmental Information estimated total U.S. losses from Hurricanes Harvey, Irma and Maria at US$ 265 billion. The World Bank estimates Dominica’s total damages and losses from the hurricane at US$ 1.3 billion or 224% of its Gross Domestic Product (GDP).

Climate impacts hit vulnerable nations especially hard, as evidenced in a recent study by the International Monetary Fund, which warned that a 1 °C increase in temperature would cut significantly economic growth rates in many low-income countries.

The overall risk of heat-related illness or death has climbed steadily since 1980, with around 30% of the world’s population now living in climatic conditions that deliver potentially deadly temperatures at least 20 days a year, according to information from the World Health Organization quoted in the Statement. It also included a section on the relationship between climate and the Zika epidemic in the Americas in 2014–2016.

In 2016, weather-related disasters displaced 23.5 million people. Consistent with previous years, the majority of these internal displacements were associated with floods or storms and occurred in the Asia-Pacific region.

Massive internal displacement in the context of drought and food insecurity continues across Somalia. From November 2016 to December 2017, 892 000 drought-related displacements were recorded by the United Nations High Commissioner for Refugees (UNHCR). In the Horn of Africa, the failure of the 2016 rainy season was followed by a harsh January–February 2017 dry season, and a poor March-to-May rainy season. In Somalia, as of June 2017, more than half of the cropland was affected by drought, and herds had reduced by 40–60% since December 2016 due to increased mortality and distress sales, according to the Food and Agriculture Organization and World Food Programme.

Floods affected the agricultural sector, especially in Asian countries. Heavy rains in May 2017 triggered severe flooding and landslides in south-western areas of Sri Lanka. The negative impact of floods on crop production further aggravated the food security conditions in the country already stricken by drought, according to FAO and WFP.

Global sea surface temperatures in 2017 were somewhat below the levels of 2015 and 2016, but still ranked as the third warmest on record. Ocean heat content, a measure of the heat in the oceans through their upper layers down to 2 000 meters, reached new record highs in 2017.

The Statement said that the magnitude of almost all of individual components of sea level rise has increased in recent years, in particular melting of the polar ice sheets, mostly in Greenland and to a lesser extent Antarctica.

For the second successive year, above-average sea surface temperatures off the east coast of Australia resulted in significant coral bleaching in the Great Barrier Reef.

The Climate Statement contained a special section on ocean acidification from the Intergovernmental Oceanographic Commission of UNESCO. Over the past 10 years, various studies have confirmed that ocean acidification is directly influencing the health or coral reefs, the success, quality and taste of aquaculture raised fish and seafood, and the survival and calcification of several key organisms. These alterations have cascading effects within the food web, which are expected to result in increasing impacts on coastal economies.

Sea ice extent was well below the 1981–2010 average throughout 2017 in both the Arctic and Antarctic. The winter maximum of Arctic sea ice was the lowest winter maximum in the satellite record.  The summer minimum was the 8th lowest on record, but a slow freeze-up saw sea ice extent once again near record lows for December.

The Greenland ice sheet mass balance change from September to December 2017 was close to average. Despite the gain in overall ice mass this year, it is only a small departure from the trend over the past two decades, with the Greenland ice sheet having lost approximately 3 600 billion tons of ice mass since 2002.

Northern Hemisphere snow cover extent was near or slightly above the 1981–2010 average for most of the year. 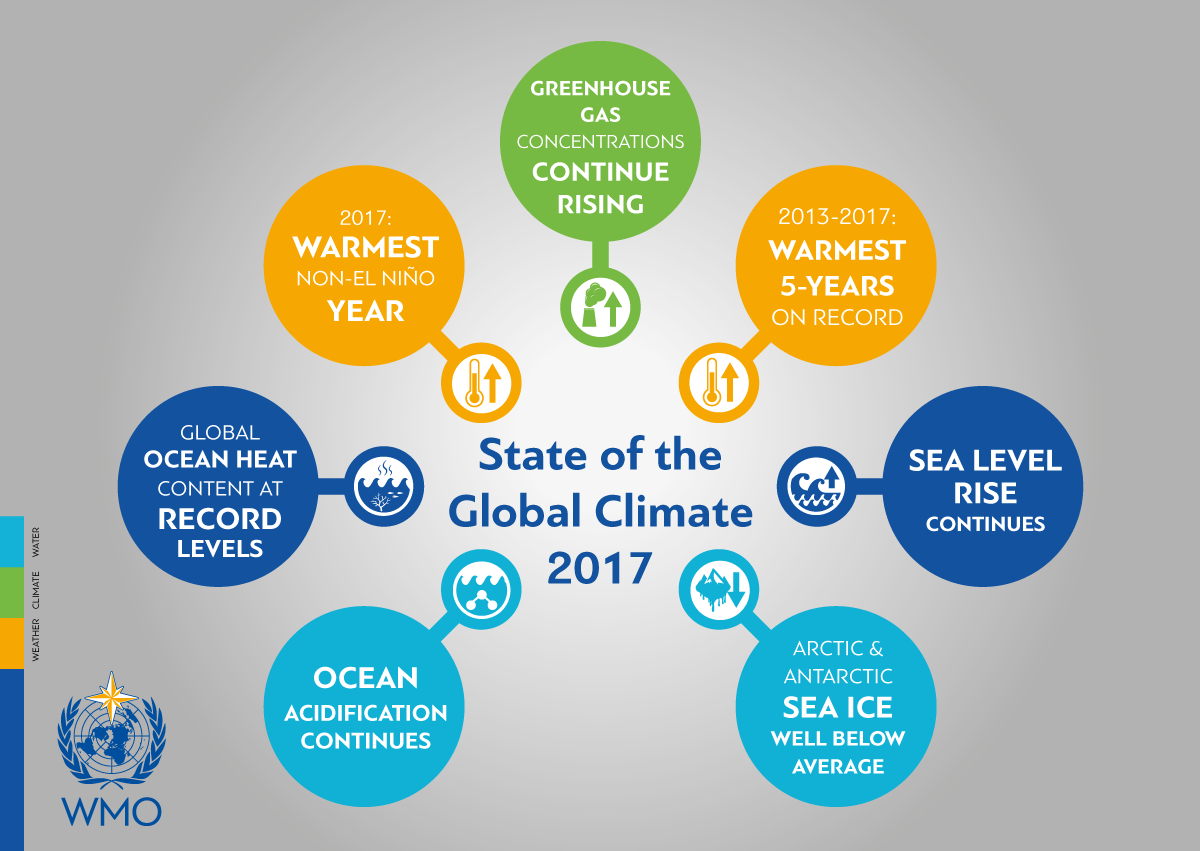 Information used in this report is sourced from a large number of National Meteorological and Hydrological Services (NMHSs) and associated institutions, as well as Regional Climate Centres, the World Climate Research Programme (WCRP), the Global Atmosphere Watch (GAW) and Global Cryosphere Watch. Information has also been supplied by a number of other United Nations agencies, including the Food and Agriculture Organization (FAO), the World Food Programme (WFP), the World Health Organization (WHO), the United Nations High Commissioner for Refugees (UNHCR), the International Organization for Migration (IOM), the International Monetary Fund (IMF), the United Nations International Strategy for Disaster Reduction (UNISDR) and the Intergovernmental Oceanographic Commission of UNESCO (IOC-UNESCO).