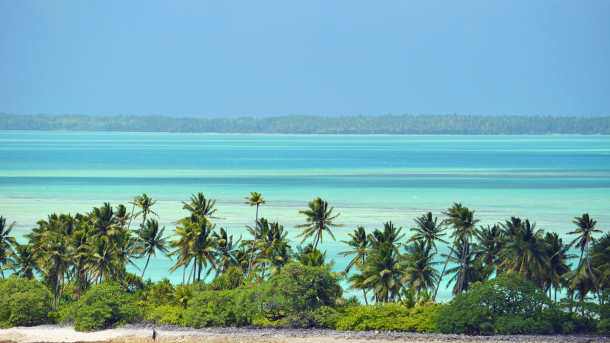 Sharm-el-Sheikh, Egypt, 17 November 2022 - Sea surface temperatures and ocean heat in parts of the South-West Pacific are increasing at more than three times the global average and harming vital ecosystems, whilst sea level rise poses an existential threat to low-lying islands and their people, according to a new report from the World Meteorological Organization (WMO).

The State of the Climate in the South-West Pacific 2021 shows how weather-related disasters are undermining socio-economic development, and threatening health, food and water security. It provides a snapshot of climate indicators like temperatures, sea level rise, ocean heat and acidification and extreme weather, alongside risks and impacts.

Temperatures in the region were cooler than the previous few years largely because of a La Niña event, which brought dry conditions in much of the equatorial Pacific, and wet conditions over parts of South-East Asia and Australia. But this did not reverse the long-term warning trend or slow other climate change impacts like the melting of glaciers.

In 2021, the region reported 57 natural hazards, 93% of which were floods and storms. Overall, 14.3 million people were directly affected by these disasters, causing total economic damage of US$ 5.7 billion. Economic damage from storms has increased by 30% and more than doubled for floods, compared to the past two decades.

And yet, despite being on the frontline of climate change, many countries in the South West Pacific region don’t have enough tools to adapt. There are big gaps in observing systems and early warning services. The region is therefore one of the priority targets of a new UN Early Warnings for All initiative to ensure that everyone on Earth is protected in the next five years.

“The present report shows that sea-level rise has continued in the region. Given that there are many island countries in the region and most large cities are in coastal zones, this trend could exacerbate vulnerabilities in the region with respect to storm surges, coastal inundation and erosion, food and water security, and ultimately habitability and sustainability of the region,” said WMO Secretary-General Prof. Petteri Taalas.

The report and an accompanying story map were launched at the United Nations Climate Change negotiations, COP27, on 17 November. The plight of Small Island Developing States (SIDS) is one of the recurrent themes of the annual climate change negotiations. At the launch event, Pacific Island delegates repeatedly stressed the need to keep temperatures to the 1.5°C lower limit of the Paris Agreement.

“The “riskscape” of the South-West Pacific is expanding and intensifying with climate change, combined with further challenges emanating from our ongoing mission of COVID-19 recover,” said Armida Salsiah Alisjahbana Under-Secretary-General of the United Nations and Executive Secretary of the Economic and Social Commission for Asia and the Pacific.

In terms of countries, Australia has suffered the highest proportion of economic losses due to floods in the region (US$ 2.5 billion), followed by New Zealand (US$ 247 million), and Malaysia (US$ 200 million). But this is not proportionate to GDP.

The ESCAP Asia-Pacific Disaster Reports 2021 and 2022 estimate that in the South-West Pacific, investments in adaptation would need to be highest in Indonesia, at US$ 8.8 billion, followed by the Philippines at US$ 5.5 billion. As a percentage of the country’s GDP, the highest cost is estimated for Vanuatu at 9.6%, followed by Tonga at 8.6%.

“Given that floods and tropical cyclones account for the highest economic losses, adaptation investment must be directed towards prioritizing anticipatory action and preparedness for these events,” said Ms. Salsiah Alisjahbana.

“New infrastructure needs to be made more resilient, alongside improvements in water resources management and dryland agriculture crop production, while nature-based solutions bring durable and wide-ranging benefits. Investing in these solutions would also ensure progress on Sustainable Development Goals,” she said.

The tropical cyclone season was slightly below average overall in the western North Pacific and close to average in terms of total numbers of tropical cyclones in both the Australian and South Pacific regions.

Among tropical cyclones in the region, Seroja was the most significant cyclone in the southern hemisphere in 2021, bringing severe damage to Indonesia and Australia. Tropical Cyclone Rai also brought severe damage to the Philippines.

Tropical cyclones with strong winds and heavy rainfall destroyed many of the small hold farms and individual gardens upon which around 80% of all Pacific Islanders rely for agricultural produce, thereby contributing to increased food insecurity in the region. Kiribati and Tuvalu, where annual rainfall was widely less than 50% of average, were the worst affected by drought, while the Federated States of Micronesia and the Republic of the Marshall Islands also experienced significant drought at times.