WMO reports on freshwater availability in a changing climate

Geneva, 29 November 2022 - The World Meteorological Organization has published its first State of Global Water Resources report in order to assess the effects of climate, environmental and societal change on the Earth’s water resources. The aim of this annual stocktake is to support monitoring and management of global freshwater resources in an era of growing demand and limited supplies.

The report gives an overview of river flow, as well as major floods and droughts. It provides insights into hotspots for changes in freshwater storage and highlights the crucial role and vulnerability of the cryosphere (snow and ice).

The report shows how large areas of the globe recorded drier than normal conditions in 2021 - a year in which precipitation patterns were influenced by climate change and a La Niña event. The area with below-average streamflow was approximately two times larger than the above-average area, in comparison to the 30-year hydrological average.

“The impacts of climate change are often felt through water – more intense and frequent droughts, more extreme flooding, more erratic seasonal rainfall and accelerated melting of glaciers – with cascading effects on economies, ecosystems and all aspects of our daily lives. And yet, there is insufficient understanding of changes in the distribution, quantity, and quality of freshwater resources,” said WMO Secretary-General Prof. Petteri Taalas.

“The State of Global Water Resources report aims to fill that knowledge gap and provide a concise overview of water availability in different parts of the world. This will inform climate adaptation and mitigation investments as well as the United Nations campaign to provide universal access in the next five years to early warnings of hazards such as floods and droughts,” said Prof. Taalas.

Currently, 3.6 billion people face inadequate access to water at least a month per year and this is expected to increase to more than 5 billion by 2050. Between 2001 and 2018, UN-Water reported that 74% of all natural disasters were water-related. The recent UN climate change conference,  COP27,  urged governments to further integrate water into adaptation efforts, the first-time water has been referenced in a COP outcome document in recognition of its critical importance.

The first edition of the report looks at streamflow – the volume of water flowing through a river channel at any given time. It also assesses terrestrial water storage - all water on the land surface and sub-surface and the cryosphere (frozen water).

The information and accompanying maps are largely based on modelled data (to achieve maximum geographical coverage) and remotely sensed information from NASA’s GRACE (Gravity Recovery and Climate Experiment) mission for terrestrial water storage. The modelled results were validated against observed data, wherever available).

Large areas of the globe recorded dryer than normal conditions in 2021, compared to the average of the 30-year hydrological base period.

These areas included South America’s Rio de la Plata area, where a persistent drought has affected the region since 2019, the South and South-East Amazon, and basins in North America including the Colorado, Missouri and Mississippi river basins.

In Africa, rivers such as the Niger, Volta, Nile and Congo had less than normal discharge in 2021. Similarly, rivers in parts of Russia, West Siberia and in Central Asia had lower than average discharge in 2021.

There was above normal river discharge in some Northern American basins, the North Amazon and Southern Africa (Zambezi and Orange), as well as China (the Amur river basin) and northern India.

Approximately one third of the areas analysed was in line with the 30-year average.

Significant flood events with numerous casualties were reported, among others, from China (Henan province), northern India, western Europe, and countries impacted by tropical cyclones, such as Mozambique, the Philippines and Indonesia.

Terrestrial water storage is all water on the land surface and in the subsurface.

In 2021, terrestrial water storage was classified as below normal (in comparison to average calculated from 2002-2020) on the West coast of the USA, in the central part of South America and Patagonia, North Africa and Madagascar, Central Asia and the Middle East, Pakistan and North India.

On a longer-term basis, the report pointed out several hotspots with a negative trend in terrestrial water storage. These include Brazil’s Rio São Francisco basin, Patagonia, the Ganges and Indus headwaters, as well as south-western USA.

In contrast, the Great Lakes Region exhibits a positive anomaly, as does the Niger basin, East African Rift and North Amazon basin.

Overall, the negative trends are stronger than the positive ones. Some of the hotspots are exacerbated by over-abstraction of groundwater for irrigation. The melting of snow and ice also has a significant impact in several areas including Alaska, Patagonia and the Himalayas. 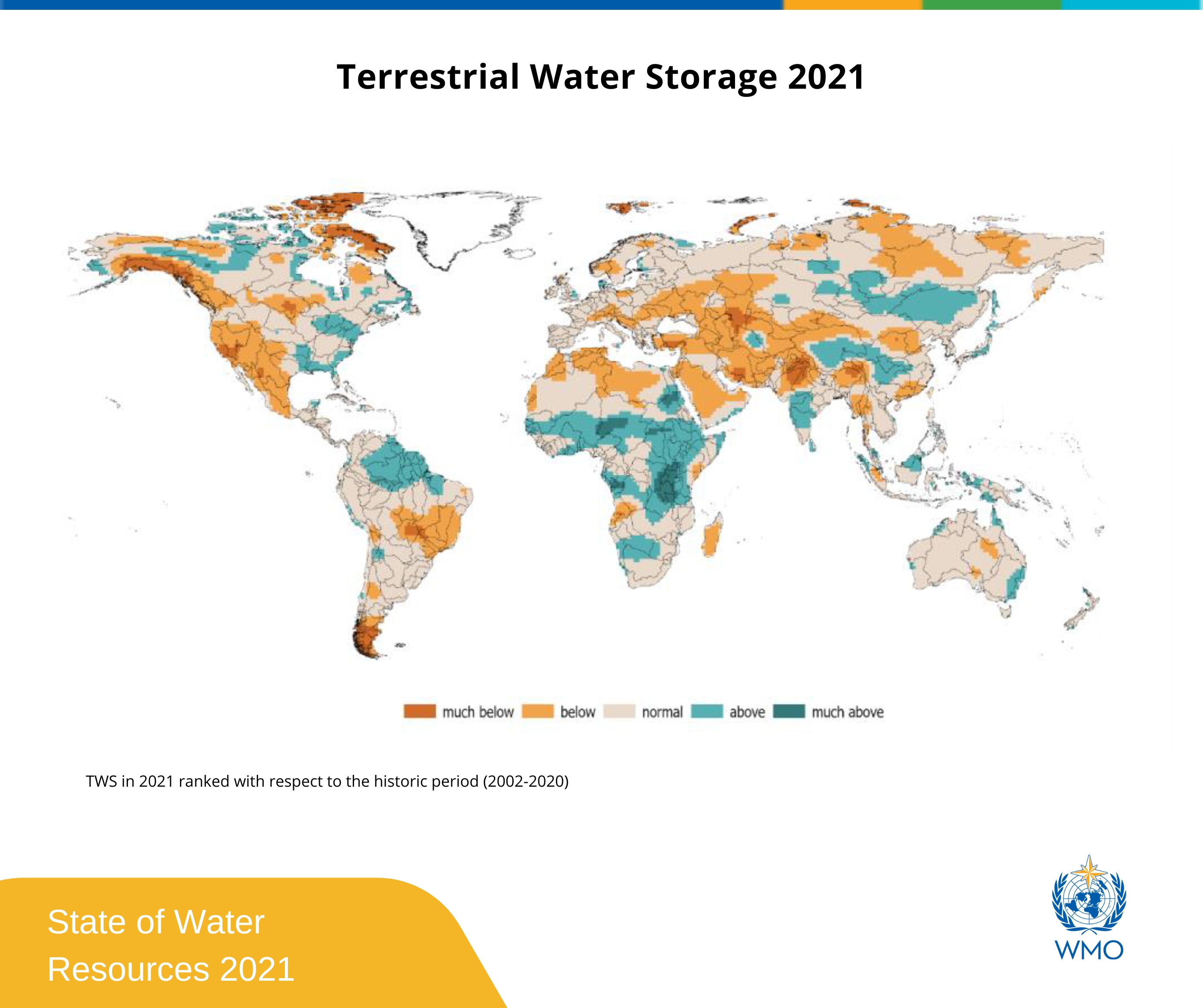 The cryosphere (glaciers, snow cover, ice caps and, where present, permafrost) is the world’s biggest natural reservoir of freshwater. Mountains are often called natural “water towers” because they are the source of rivers and freshwater supplies for an estimated 1.9 billion people.

Changes to cryosphere water resources affect food security, human health, ecosystem integrity and maintenance, and leads to significant impacts on economic and social development. Such changes also cause hazards such as river flooding and flash floods due to glacier lake outbursts.

With rising temperatures, the annual glacier run-off typically increases at first, until a turning point, often called ”peak water”, is reached, upon which run-off declines. The long-term projections of the changes in glacier run-off and the timing of peak water are key inputs to long-term adaptation decisions.

Future assessments in the WMO State of Global Water Resources will provide the incentive to regularly assess changes in the cryosphere and the variability of water resources, at basin and regional level. 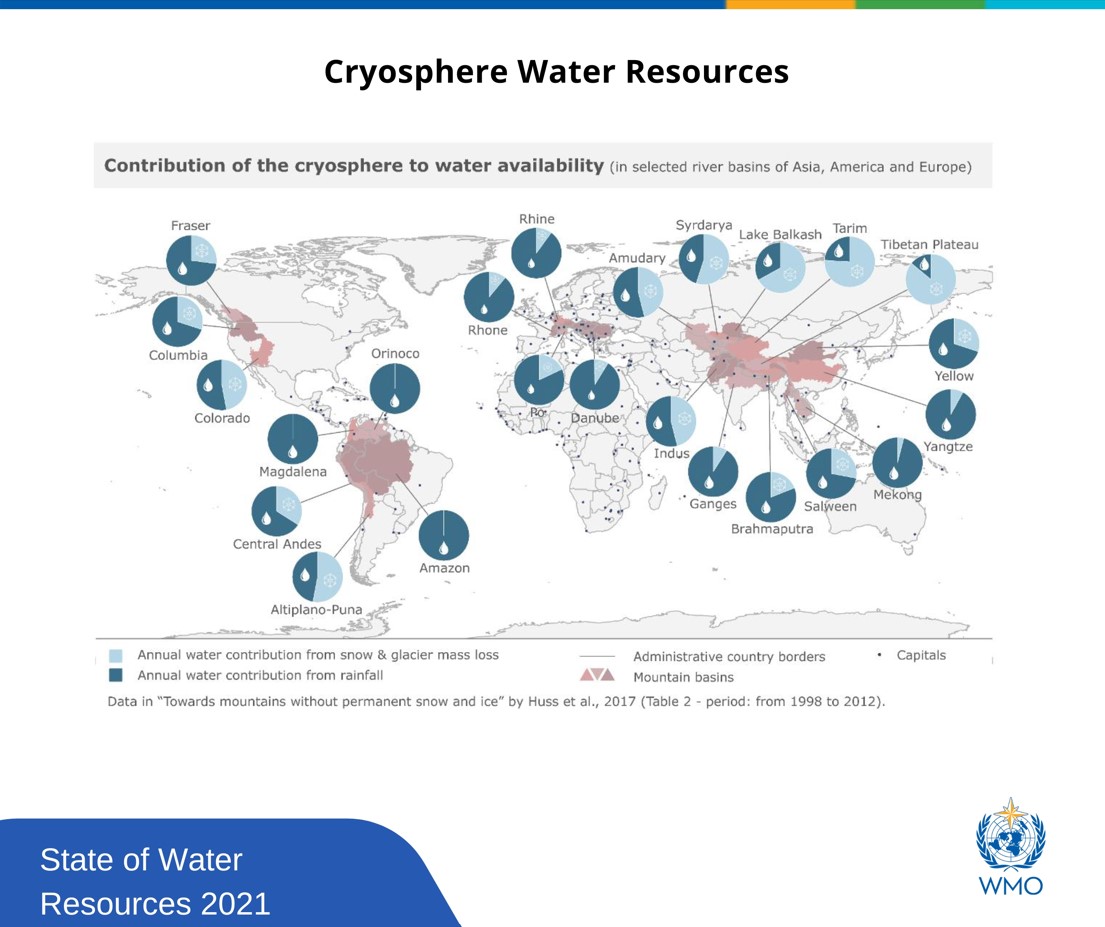