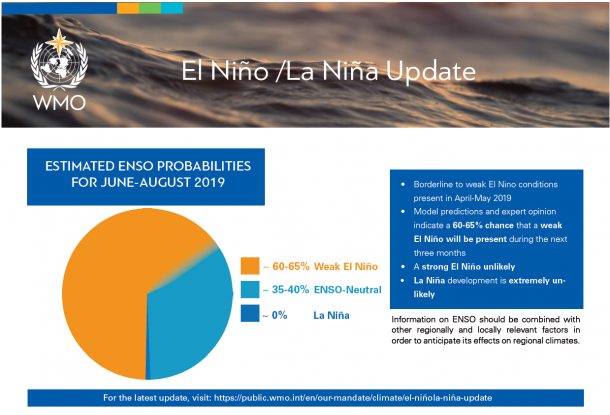 A strong El Niño event during 2019 appears unlikely, according to a new World Meteorological Organization Update, which is based on forecast models and expert opinion from around the globe.

Sea surface temperatures in the tropical Pacific Ocean have been at borderline to weak El Niño levels in April and early May 2019. Some El Niño-like atmospheric patterns have also been present.

Ocean temperatures are predicted to remain close to current levels through the June-August period, but may ease in September-November. Given current conditions and model outlooks, the chance of El Niño during June-August 2019 is estimated at 60-65%, decreasing to 50% from September 2019 onwards.

Sea surface temperatures are most likely to be about 0.5 to 0.9 degrees Celsius above average in the east-central topical Pacific during the June-August 2019 season. Even if ocean conditions do remain at El Niño levels for the next several months, the chance for a strong event (sea surface temperatures in the east-central tropical Pacific rising to at least 1.5°C above average) during this period is low. The development of  La Niña is extremely unlikely.

Outlooks made at this time of the year are uncertain beyond July or August and should be considered with caution.

The above-average sea surface temperatures across sizeable portions of the globe, both in the tropics (through the weak strength El Niño in the Pacific) and extra-tropics, are expected to contribute towards above-normal land temperature, particularly in tropical latitudes in June, July and August. The global warming trend also contributes to the sea surface temperature and air temperature forecast, according to a WMO Global Seasonal Climate Update issued at the same time as the El Niño Update.

Some of the predicted large-scale seasonal precipitation anomalies over land are in keeping with typical El Niño patterns, such as the likelihood of below-normal rainfall for much of the Indonesian archipelago, Central America and the Caribbean, and above-normal for part of southeast South America, according to the Global Seasonal Climate Update, which is currently being issued as a trial, pre-operational product.

The El Niño/Southern Oscillation (ENSO) is a naturally occurring phenomenon involving fluctuations of ocean surface temperatures in the equatorial Pacific, coupled with changes in the overlying atmospheric circulation. It has a major influence on weather and climate patterns over many parts of the world and is linked to hazards such as heavy rains, floods and drought. ENSO also affects global temperature and even a weak El Niño has a warming impact. Thus, 2016 became the warmest year on record because of a powerful El Niño in 2015/2016 combined with long-term climate change. Climate change has increased air and sea surface temperatures and also ocean heat. More than 90% of the energy trapped by greenhouse gases goes into the ocean, and ocean heat content (upper 2 000 m) consequently reached new record levels in 2018.

It is important to note that El Niño and La Niña are not the only factors that drive global climate patterns, and that the strength of El Niño/Southern Oscillation (ENSO) does not automatically correspond to the strength of its effects. WMO has therefore started producing the Global Seasonal Climate Update, which also factors in other climate drivers such as the Indian Ocean Dipole, and is based on climate model predictions around the world from WMO Global Producing Centres of Long Range Forecasts.

WMO’s update is based on forecast models and expert interpretation from around the world. It is used by planners within the United Nations system, and complements information issued by National Meteorological and Hydrological Services, WMO Regional Climate Centres and Regional Climate Outlook Forums as a source of information for country-level decision-making by disaster managers, for planning in climate-sensitive sectors, and by governments.

Global-scale seasonal forecasts, including those of precipitation and surface temperature, are routinely produced by WMO accredited centres using sophisticated atmosphere-ocean coupled models, which take into account ENSO as well as other climate drivers.  There are now 13 WMO Global Producing Centres of Long Range Forecasts, whose products are consolidated by a Lead Centre of Long Range Forecast Multi