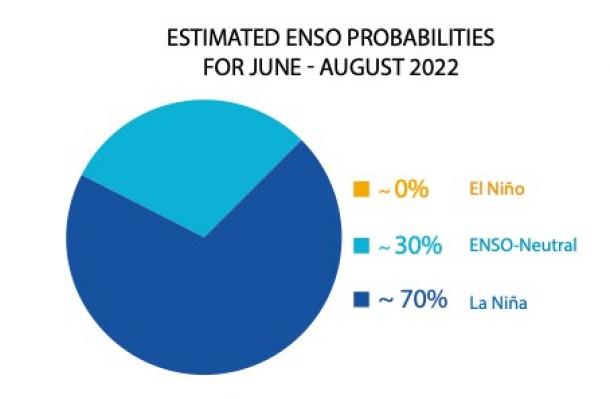 Geneva, 10 June 2022 - There is a high probability that the ongoing protracted La Niña event, which has affected temperature and precipitation patterns and exacerbated drought and flooding in different parts of the world, will continue until at least August and possibly to the northern hemisphere fall and start of winter. This is according to a new Update from the World Meteorological Organization.

Some long-lead predictions even suggest that it might persist into 2023. If so, it would only be the third “triple-dip La Niña” (three consecutive northern hemisphere winters of La Niña conditions) since 1950, according to WMO.

The ongoing drought in the Horn of Africa and southern South America bear the hallmarks of La Niña, as does the above average rainfall in South-East Asia and Australasia and predictions for an above average Atlantic hurricane season.

However, all naturally occurring climate events now take place in the context of human-induced climate change, which is increasing global temperatures, exacerbating extreme weather and climate, and impacting seasonal rainfall and temperature patterns.

“Human induced climate change amplifies the impacts of naturally occurring events like La Niña and is increasingly influencing our weather patterns, in particular through more intense heat and drought and the associated risk of wildfires – as well as record-breaking deluges of rainfall and flooding,” said WMO Secretary-General Prof. Petteri Taalas. 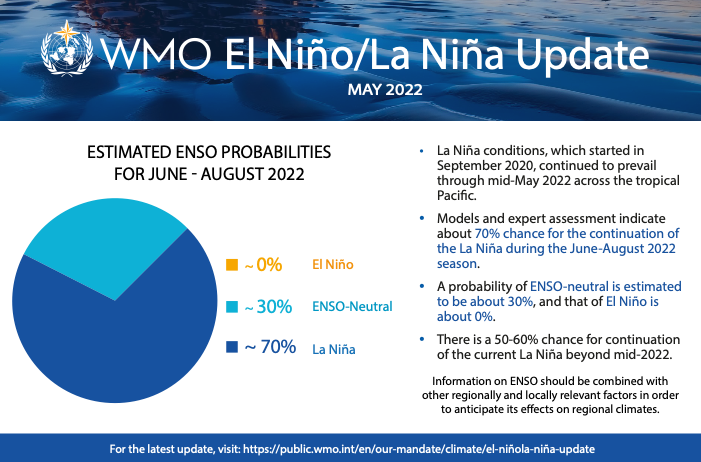 “ WMO is providing tailored support to the humanitarian sector – as witnessed by a recent multi-agency alert on the worsening drought in East Africa. Improved seasonal forecasts are pivotal in this because they help plan ahead and gain substantial socio-economic benefits in climate sensitive sectors like agriculture, food security, health and disaster risk reduction, “ said Prof. Taalas.

“In addition to improving climate services, WMO is also striving towards the goal that everyone should have access to early warning systems in the next five years to protect them against hazards related to our weather, climate and water,” he said.

The current La Niña event started in September 2020 and continued through mid-May 2022 across the tropical Pacific.

There was a temporary weakening of the oceanic components of La Niña during January and February 2022, but it has strengthened since March 2022.

WMO Global Producing Centers for Long Range Forecasts indicate that there is about a 70% chance of the current La Niña conditions extending into boreal summer 2022, and about 50-60% during July-September 2022.

There are some indications that the probability may increase again slightly during the boreal fall of 2022 and early boreal winter of 2022-23.

In addition to the long-established ENSO Update, WMO now also issues regular Global Seasonal Climate Updates (GSCU), which incorporate influences of all other major climate drivers such as the North Atlantic Oscillation, the Arctic Oscillation and the Indian Ocean Dipole.

The Global Seasonal Climate Update is based on forecasts from WMO Global Producing Centres of Long-Range Forecasts and is available to support governments, the United Nations, decision-makers and stakeholders in climate sensitive sectors to mobilize preparations and protect lives and livelihoods.

Despite the stubborn La Niña in the equatorial central and eastern Pacific, widespread warmer than-average sea-surface temperatures elsewhere are predicted to dominate the forecast of air temperatures for June-August 2022. However, the extent and strength of predicted warming is less than during March-May 2022, according to the GSCU. Models indicate increased chance of negative Indian Ocean Dipole (IOD) over June-August 2022.

Probabilistic forecasts of surface air temperature and precipitation for the season June-August 2022.