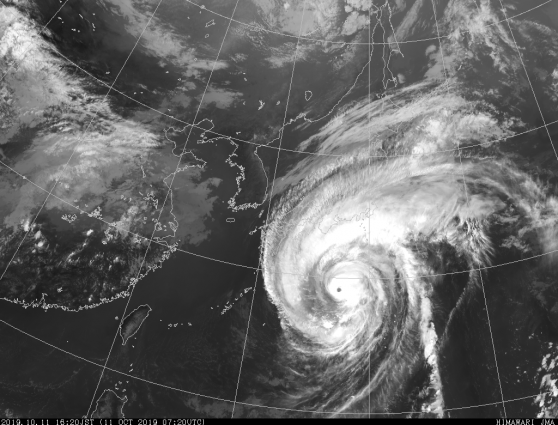 Dramatic improvements in satellite technology, forecasts and early warnings have helped save hundreds of thousands of lives from tropical cyclones. But the increasing societal impacts as a result of sea level rise, more extreme weather and population shifts call for even more concerted disaster risk management in the future.

This was the underlying message of the High-level Dialogues on Tropical Cyclones, which were hosted by the Japan Meteorological Agency (JMA) to commemorate the 30th anniversary of WMO’s Regional Specialized Meteorological Centre (RSMC) Tokyo – Tokyo Typhoon Center. In addition to celebrating three decades of achievement, a concluding statement on 11 October pinpointed priorities for the next decade to protect lives and livelihoods.

Highlighting the threat posed by tropical cyclones, Typhoon Hagibis hit Japan as a huge and powerful storm, with hurricane-force winds, record-breaking rainfall, devastating storm surge and coastal and inland flooding. It brought widespread devastation and disruption to densely populated cities, including the capital Tokyo, and infrastructure.

The number of casualties was expected to increase as Japan began a huge disaster relief operation on  13 October - the International Day for Disaster Reduction.

Hagibis was one of the most rapidly intensifying tropical cyclones on record in the region, at one stage reaching a category 5 equivalent. Although Hagibis weakened ahead of landfall, it was still one of the highest-impact storms to hit Japan in many years.

JMA said that record-breaking heavy rain was observed in the worst hit areas. Total precipitation due to the tropical cyclone reached 1,000 mm in Hakone-machi, southwestern part of Kanagawa prefecture, and 500 mm at 17 locations in Kanto-Koshin region and Shizuoka prefecture. Due to such heavy rains, JMA issued top-level Emergency Warnings for Heavy Rain on October 12-13.

An outcome statement issued at the end of the High-level Dialogues highlighted the role of NMHSs as a trigger for disaster prevention and response of the whole country. It also stressed the importance of collaboration between all sectors of society, including physical and social science areas, in order to enhance warning services of NMHSs based on an understanding of risk perceptions and human behavior.

Mr Yasuo Sekita, Director-General of JMA and the Permanent Representative of Japan with WMO, emphasized the shared perception on the urgent need for NMHSs to enhance social science approaches through inter-sectoral collaboration to better serve the society, and confirmed his decision to take lead in supporting NMHSs in developing capacity through various activities of RSMC Tokyo.

“Tropical cyclones are among the most devastating of all natural hazards. They wreak havoc with their violent winds, torrential rainfall and associated storm surges and floods,” said WMO Secretary-General Petteri Taalas. “Seven out of ten disasters that caused the biggest economic losses in the world from 1970-2019 are tropical cyclones,” he said.

“New technologies and dramatic advances in monitoring and forecasting skills of tropical cyclones achieved in the last 30 years means that death tolls of tens or even hundreds of thousands are a thing of the past. Improved multi-hazard early warning systems will help us protect lives and property in the future. But the challenges are immense,” said Mr Taalas.

Sea level rise and extreme weather patterns are having an increasing impact on vulnerable populations, especially those of Small Island Developing States (SIDSs) and coastal megacities. Some studies show an increase in tropical cyclone intensify because of climate change.

The Tokyo Typhoon Center is one of WMO’s longest-established Regional Specialized Meteorological Centres. It is responsible for the western North Pacific region, where more tropical cyclones occur than anywhere else in the world, and serves the ESCAP/WMO Typhoon Committee.

Since its establishment in 1989, RSMC Tokyo has witnessed drastic improvements in satellite imagery and tropical cyclone track forecasts, as well as capacity development for disaster-prone developing countries in the basin.

JMA shares meteorological data from the Himawari-8 satellite with the Asia-Pacific basin and has provided technical assistance for obtaining and using the data. This has proved vital to support improved preparedness in the face of rapidly developing weather systems such as tropical cyclones.