United in Science report: Climate Change has not stopped for COVID19 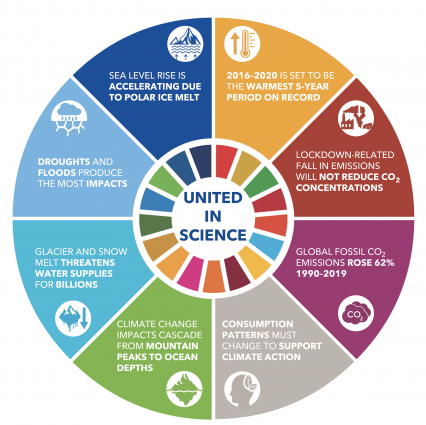 United in Science report: Climate Change has not stopped for COVID19

New York/Geneva - Climate change has not stopped for COVID19. Greenhouse gas concentrations in the atmosphere are at record levels and continue to increase. Emissions are heading in the direction of pre-pandemic levels following a temporary decline caused by the lockdown and economic slowdown. The world is set to see its warmest five years on record – in a trend which is likely to continue - and is not on track to meet agreed targets to keep global temperature increase well below 2 °C or at 1.5 °C above pre-industrial levels.

This is according to a new multi-agency report from leading science organizations, United in Science 2020. It highlights the increasing and irreversible impacts of climate change, which affects glaciers, oceans, nature, economies and human living conditions and is often felt through water-related hazards like drought or flooding. It also documents how COVID-19 has impeded our ability to monitor these changes through the global observing system.

“This has been an unprecedented year for people and planet. The COVID-19 pandemic has disrupted lives worldwide. At the same time, the heating of our planet and climate disruption has continued apace,” said UN Secretary-General António Guterres in a foreword.

“Never before has it been so clear that we need long-term, inclusive, clean transitions to tackle the climate crisis and achieve sustainable development. We must turn the recovery from the pandemic into a real opportunity to build a better future,” said Mr Guterres, who will present the report on 9 September. “We need science, solidarity and solutions.”

The United in Science 2020 report, the second in a series, is coordinated by the World Meteorological Organization (WMO), with input from the Global Carbon Project, the Intergovernmental Panel on Climate Change, the Intergovernmental Oceanographic Commission of UNESCO, the UN Environment Programme and the UK Met Office. It presents the very latest scientific data and findings related to climate change to inform global policy and action.

“Greenhouse gas concentrations - which are already at their highest levels in 3 million years - have continued to rise. Meanwhile, large swathes of Siberia have seen a prolonged and remarkable heatwave during the first half of 2020, which would have been very unlikely without anthropogenic climate change. And now 2016–2020 is set to be the warmest five-year period on record. This report shows that whilst many aspects of our lives have been disrupted in 2020, climate change has continued unabated,” said WMO Secretary-General, Professor Petteri Taalas.

Atmospheric CO2 concentrations showed no signs of peaking and have continued to increase to new records. Benchmark stations in the WMO Global Atmosphere Watch (GAW) network reported CO2 concentrations above 410 parts per million (ppm) during the first half of 2020, with Mauna Loa (Hawaii) and Cape Grim (Tasmania) at 414.38 ppm and 410.04 ppm, respectively, in July 2020, up from 411.74 ppm and 407.83 ppm in July 2019.

Reductions in emissions of CO2 in 2020 will only slightly impact the rate of increase in the atmospheric concentrations, which are the result of past and current emissions, as well as the very long lifetime of CO2. Sustained reductions in emissions to net zero are necessary to stabilize climate change.

CO2 emissions in 2020 will fall by an estimated 4% to 7% in 2020 due to COVID-19 confinement policies. The exact decline will depend on the continued trajectory of the pandemic and government responses to address it.

During peak lockdown in early April 2020, the daily global fossil CO2 emissions dropped by an unprecedented 17% compared to 2019. Even so, emissions were still equivalent to 2006 levels, highlighting both the steep growth over the past 15 years and the continued dependence on fossil sources for energy.

Global methane emissions from human activities have continued to increase over the past decade. Current emissions of both CO2 and methane are not compatible with emissions pathways consistent with the targets of the Paris Agreement.

Transformational action can no longer be postponed if the Paris Agreement targets are to be met.

The Emissions Gap in 2030 is estimated at 12-15 Gigatonnes (Gt) CO2e to limit global warming to below 2 °C. For the 1.5 ° C goal, the gap is estimated at 29-32 Gt CO2e, roughly equivalent to the combined emissions of the six largest emitters.

It is still possible to bridge the emissions gap, but this will require urgent and concerted action by all countries and across all sectors. A substantial part of the short-term potential can be realized through scaling up existing, well-proven policies, for instance on renewables and energy efficiency, low carbon transportation means and a phase out of coal.

Looking beyond the 2030 timeframe, new technological solutions and gradual change in consumption patterns are needed at all levels. Both technically and economically feasible solutions already exist.

Major impacts have been caused by extreme weather and climate events. A clear fingerprint of human-induced climate change has been identified on many of these extreme events.

Human-induced climate change is affecting life-sustaining systems, from the top of the mountains to the depths of the oceans, leading to accelerating sea-level rise, with cascading effects for ecosystems and human security.

Ice sheets and glaciers worldwide have lost mass. Between 1979 and 2018, Arctic sea-ice extent has decreased for all months of the year. Increasing wildfire and abrupt permafrost thaw, as well as changes in Arctic and mountain hydrology, have altered the frequency and intensity of ecosystem disturbances.

The global ocean has warmed unabated since 1970 and has taken up more than 90% of the excess heat in the climate system. Since 1993 the rate of ocean warming, and thus heat uptake has more than doubled. Marine heatwaves have doubled in frequency and have become longer-lasting, more intense and more extensive, resulting in large-scale coral bleaching events. The ocean has absorbed between 20% to 30% of total anthropogenic CO2 emissions since the 1980s causing further ocean acidification.

Since about 1950 many marine species have undergone shifts in geographical range and seasonal activities in response to ocean warming, sea-ice change and oxygen loss.

Global mean sea-level is rising, with acceleration in recent decades due to increasing rates of ice loss from the Greenland and Antarctic ice sheets, as well as continued glacier mass loss and ocean thermal expansion. The rate of global mean sea-level rise for 2006–2015 of 3.6 ±0.5 mm/yr is unprecedented over the last century

Climate change impacts are most felt through changing hydrological conditions including changes in snow and ice dynamics.

The cryosphere is an important source of freshwater in mountains and their downstream regions. There is high confidence that annual runoff from glaciers will reach peak globally at the latest by the end of the 21st century. After that, glacier runoff is projected to decline globally with implications for water storage.

It is estimated that Central Europe and Caucasus have reached peak water now, and that the Tibetan Plateau region will reach peak water between 2030 and 2050. As runoff from snow cover, permafrost and glaciers in this region provides up to 45% of the total river flow, the flow decrease would affect water availability for 1.7 billion people.

The COVID-19 pandemic has produced significant impacts on the global observing systems, which in turn have affected the quality of forecasts and other weather, climate and ocean-related services.

The reduction of aircraft-based observations by an average of 75% to 80% in March and April degraded the forecast skills of weather models. Since June, there has been only a slight recovery. Observations at manually operated weather stations, especially in Africa and South America, have also been badly disrupted.

For hydrological observations like river discharge, the situation is similar to that of atmospheric in situ measurements. Automated systems continue to deliver data whereas gauging stations that depend on manual reading are affected.

In March 2020, nearly all oceanographic research vessels were recalled to home ports. Commercial ships have been unable to contribute vital ocean and weather observations, and ocean buoys and other systems could not be maintained. Four full-depth ocean surveys of variables such as carbon, temperature, salinity, and water alkalinity, completed only once per decade, have been cancelled. Surface carbon measurements from ships, which tell us about the evolution of greenhouse gases, also effectively ceased.

The impacts on climate change monitoring are long-term. They are likely to prevent or restrict measurement campaigns for the mass balance of glaciers or the thickness of permafrost, usually conducted at the end of the thawing period. The overall disruption of observations will introduce gaps in the historical time series of Essential Climate Variables needed to monitor climate variability and change and associated impacts.

Notes to Editors:
This report has been compiled by the World Meteorological Organization (WMO) under the direction of the United Nations Secretary-General to bring together the latest climate science related updates from a group of key global partner organizations – WMO, Global Carbon Project (GCP), UNESCO Intergovernmental Oceanographic Commission (UNESCO-IOC), Intergovernmental Panel on Climate Change (IPCC), UN Environment Programme (UNEP) and the Met Office. The content of each chapter is attributable to each respective organization. The report is available electronically at: public.wmo.int/en/resources/united_in_science