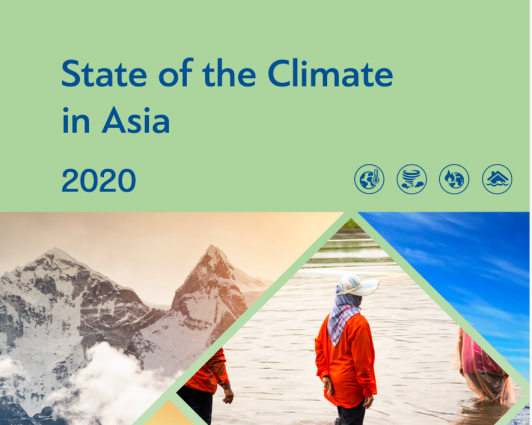 Geneva, 26 October 2021 (WMO) - Extreme weather and climate change impacts across Asia in 2020 caused the loss of life of thousands of people, displaced millions of others and cost hundreds of billions of dollars, while wreaking a heavy toll on infrastructure and ecosystems. Sustainable development is threatened, with food and water insecurity, health risks and environmental degradation on the rise, according to a new multi-agency report coordinated by the World Meteorological Organization (WMO).

The State of the Climate in Asia 2020 provides an overview of land and ocean temperatures, precipitation, glacier retreat, shrinking sea ice, sea level rise and severe weather. It examines socio-economic impacts in a year when the region was also struggling with the COVID-19 pandemic, which in turn complicated disaster management.

The report shows how every part of Asia was affected, from Himalayan peaks to low-lying coastal areas, from densely populated cities to deserts and from the Arctic to the Arabian seas.

“Combined, these impacts take a significant toll on long term sustainable development, and progress toward the UN 2030 Agenda and Sustainable Development Goals in particular,” he said.

The report combines input from a wide range of partners including the United Nations Economic and Social Commission for Asia and the Pacific (ESCAP) and other UN agencies, national meteorological and hydrological services as well as leading scientists and climate centres. It was published ahead of the UN Climate Change Conference, COP26, as one of a series of regional analyses to inform decision- and policy-makers as well as regional and national investment.

It is accompanied by a story map which highlights the key messages.

"Amidst the pandemic, countries are being hit by a range of disasters and having to deal with the increasingly damaging impacts of climate change,” said Ms. Armida Salsiah Alisjahbana, UNESCAP Executive Secretary.

“Fewer than 10% of the SDG targets are on track to be achieved by 2030. The most alarming are regressing trends on climate action (Goal 13) and life below water (Goal 14): both of which are related to disaster resilience," she said.

Temperatures: Asia had its warmest year on record in 2020, with the mean temperature 1.39 °C above the 1981–2010 average. There were many notable heat extremes, including a temperature of 38.0°C at Verkhoyansk, Russian Federation, provisionally the highest known temperature anywhere north of the Arctic Circle.

Precipitation: The East Asian and South Asian summer monsoons were both unusually active, This, combined with frequent tropical cyclones, caused floods and landslides, leading to loss of life and displacement in many countries.

Sea surface temperatures and ocean warming in and around Asia are increasing more than the global average – at three times the rate in the case of the Arabian sea.

Sea surface temperatures in parts of the Arctic Ocean have also been warming at three times the global average during the 1982-2020 period. The Barents sea, in the northern Arctic, in particular, is identified as a climate change hotspot, with sea-ice loss in turn leading to more ocean warming.

Sea ice extent: Sea-ice extent is a key indicator of the changes in the polar regions and it shapes not only the regional climate but also the global climate.

Arctic sea ice minimum extent (after the summer melt) in 2020 was the second lowest on the satellite record since 1979. The Eurasian shelf seas and the Northern Sea Route were completely ice-free in summer.

Sea level: Global average sea level has risen at a rate of 3.3 mm per year since the early 1990s. The North Indian Ocean and the Northwest Pacific Ocean are experiencing sea level rise significantly higher than the global mean.

Glacier retreat: High Mountain Asia is home to approximately 100 000 km2 of glaciers centred on the Tibetan Plateau and Himalayas. It contains the largest volumes of ice outside of the polar regions and is the source of 10 important Asian rivers.

Glacier retreat is accelerating and it is projected that glacier mass will decrease by 20% to 40% by 2050, affecting the lives and livelihoods of about 750 million people in the region. This has major ramifications for global sea level, regional water cycles and local hazards (such as landslides and avalanches).

In countries such as Afghanistan, glacial meltwater has historically been essential for maintaining water supply in times of drought and so the projected reduction in glacial run-off has major implications for water security as well as for ecosystems.

In 2020 floods and storms affected approximately 50 million people in Asia and resulted in more than 5 000 fatalities. This is below the annual average of the last two decades (158 million people affected and about 15 500 fatalities) and is testimony to the success of early warning systems in many countries in Asia.

Tropical cyclones, floods and droughts induced an estimated average annual loss (AAL) of several hundred billion dollars, according to ESCAP. Losses were estimated at approximately US$ 238 billion in China, US$ 87 billion in India and US$ 83 billion in Japan.

Displacement: Intense cyclones, monsoon rains and floods hit highly exposed and densely populated areas in South Asia and East Asia and led to the displacement of millions of people in China, Bangladesh, India, Japan, Pakistan, Nepal and Viet Nam in 2020.

Many weather and climate-related displacements in Asia are prolonged, with people unable to return home, integrate locally or settle elsewhere.

Agriculture and food security: Progress on food security and nutrition has slowed down. In 2020, 48.8 million people in South-East Asia, 305.7 million in South Asia and 42.3 million in West Asia are estimated to have been undernourished. Asia accounts for more than half of the global total.

The true impacts of COVID-19 on food security and nutrition are yet to be established. But compared with 2019, the number of undernourished people in 2020 increased by 6% in South-East Asia and West Asia, and by 20% in South Asia. Climate-related disasters compounded the problem.

Glaciers retreat and the dwindling of freshwater resources will have major repercussions for future water security and ecosystems in Asia, and the decline of coral reefs will negatively affect food security.

Mangroves provide coastal protection but are under pressure from human activities, increasing sea levels and water temperatures, as well as through change in the frequency and intensity of precipitation and storm patterns.

Forests absorb carbon dioxide and are an important carbon sink.  Between 1990 and 2018, Bhutan, China, India and Viet Nam increased their forest cover. But forest cover declined in Myanmar (26%), Cambodia (24%) and the Democratic People’s Republic of Korea (12%).

Sand and dust storms harm human health, agriculture and the environment. The frequency and intensity of dust storms are increasing due to land-use and land-cover changes and climate-related factors particularly in regions such as the Arabian Peninsula and the broader Middle East, as well as Central Asia.

Sustainable development: Asia is currently well placed to respond to extreme weather events and is among the regions with the greatest capacity for Multi-Hazard Early Warning Systems (MHEWS). 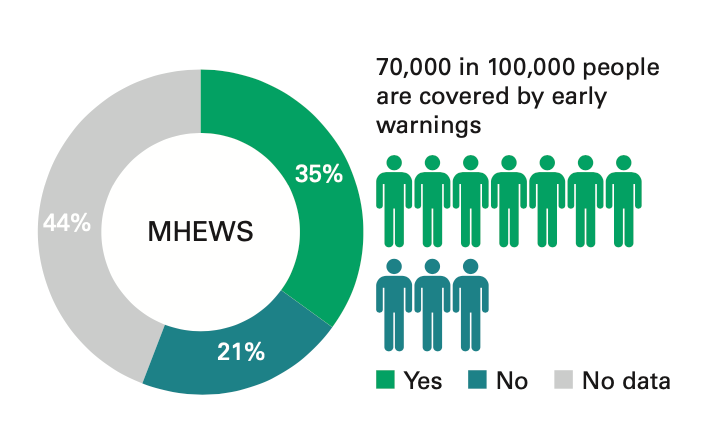 But the costs of extreme events are rising, due in part to increasing exposure. A high proportion of existing critical infrastructures are in multi-hazard risk hotspots, which can lead to significant disruption in economic activity when natural disasters occur. For instance, about a third of energy power plants, fibre-optic cable networks and airports, and 42% of road infrastructure, are in multi-hazard risk hotspots in the Asia-Pacific.

Increased heat and humidity are forecast to lead to an effective loss of outdoor working hours, with a potential cost of many billions of dollars.

Asia has regressed on Sustainable Development Goal 13 (Climate Action) in most of its subregions, to varying degrees. The region is likely to miss the SDGs unless efforts are accelerated to build resilience.

It is essential to adapt and build resilience, especially in high-risk and low-capacity parts of the region. This requires a better understanding of risks, investment in renewable energy and frontier technologies, health, environment, and social protection, and ensuring targeted and forward-looking fiscal spending.

Spending on climate adaptation is a high-return investment with multiple socio-economic benefits.

To build back better from COVID-19, it is recommended a scale-up of regional and subregional cooperation strategies that integrate disasters, including climate-related disasters, and associated health perspectives, to complement national efforts to implement the 2030 Agenda for Sustainable Development.