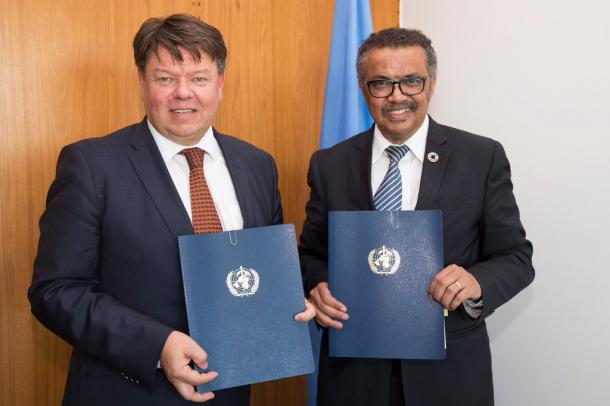 GENEVA, 31 May 2018 - In the face of growing health impacts from extreme weather, climate change and air pollution, the World Meteorological Organization (WMO) and World Health Organization (WHO) have agreed to step up joint action to tackle environmental health risks that cause an estimated 12.6 million premature deaths every year.

A new Collaboration Framework on Climate, Environment and Health was signed on 30 May by WMO Secretary-General Petteri Taalas and Dr. Tedros Adhanom Ghebreyesus, Director-General of WHO. It follows the launch of a global coalition between WMO, WHO and UN Environment during the World Health Assembly on 24 May.

The agreement commits WMO and WHO to accelerate action to improve health outcomes through the development and use of “relevant and authoritative weather, climate, atmospheric composition and hydrological science and operational services.” 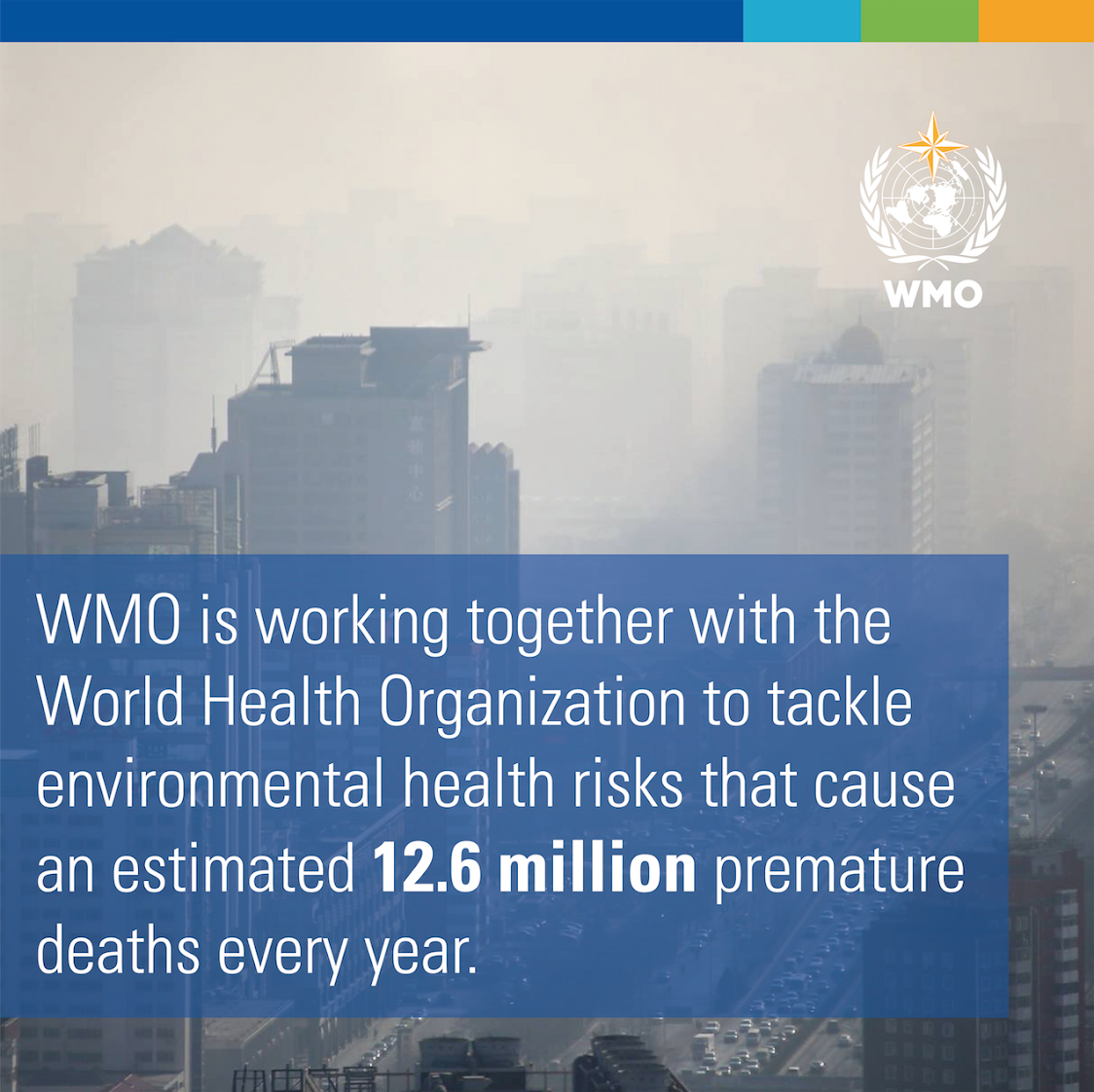 It focuses on strengthening the understanding and management of health risks associated with extreme weather and climate events and long-term climate change. This includes through better access and use of weather and climate data for risk assessment, adaptation planning and development of tailored services.

It also prioritizes improved monitoring and management of environmental health risks, such as UV radiation, hazardous air quality, and water. This will facilitate closer coordination between meteorological services, which monitor and predict air quality, and health authorities, which deal with the impact of human exposure to pollutants.

An overarching aim is to promote policies and practices which are beneficial both to public health and which cut greenhouse gas emissions.

The new agreement is aligned to the international agenda on sustainable development, disaster risk reduction and climate change adaptation. It places special emphasis on reaching the most vulnerable populations in developing countries, small island developing states and urban areas.

It is based on decades of collaboration, and puts this on a formal footing. WHO and WMO already have a Joint Office for Climate and Health.

"Every year, more than 12 million people die from the hidden risks in our environment, carried by the air we breathe, the water we drink, or unseen chemicals to which we are too often exposed. In addition, a changing climate is exposing us to more extreme weather, including storms, droughts and shifting patterns of infectious disease," said Dr Tedros. "That is why we are joining forces with other leading UN agencies to intensify our actions to address the root environmental causes of ill health."

Dr Taalas cited the example of Hurricane Maria, which officially caused 64 deaths in Puerto Rico. According to a new study by Harvard University, the hurricane was actually linked to 4,645 excess deaths – more than 70 times the official estimate – because breakdown in health care, electricity and infrastructure.

“This demonstrates that, in addition to the immediate death toll, disasters have a severe long-term impact on human health,” said Dr Taalas. “This is why WMO is fostering multi-hazard early warning services against high-impact events such as tropical cyclones which bring multiple, cascading risks.”

“Many vector-borne diseases like malaria and dengue fever are dependent on rainfall and temperature. Provision of climate services such as seasonal outlooks is vital to prevent and manage such climate-sensitive diseases. Heat-health warnings are increasingly used as a tool to reduce the health impact of heatwaves,” said Dr Taalas.

The bilateral agreement is part of a wider international coalition which also embraces UN Environment and the Climate and Clean Air Coalition.  This coalition was showcased during the annual World Health Assembly and will pool expertise and achieve greater coordination.

One of the most immediate outcomes of the coalition will be a Global Conference on Air Pollution and Health, which will take place in Geneva 30 October to 1 November 2018.

According to WHO figures, an estimated 7 million people die prematurely every year from air pollution related diseases, including strokes and heart disease, respiratory illness and cancer. Air pollution in most major cities exceeds WHO air quality standards.

Many pollutants which damage health also harm the environment and contribute to climate change. These include black carbon from diesel engines, cooking stoves and waste incineration, and ground level ozone. They are harmful but are short-lived in the atmosphere. It is estimated that reductions in short-lived climate pollutant emissions from sources like traffic, cookstoves, agriculture and industry could help trim the rate of global warming by about 0.5°C by 2050.

WMO’s role in the coalition ensures that the expertise, modelling capabilities and facilities of national meteorological services can be harnessed for global public health.

WMO’s observing network, its Sand and Dust Storm Warning, Advisory and Assessment System (SDS-WAS) and its Global Atmosphere Watch stations, which monitor the atmosphere, will be underpinning to the global drive to improve air quality mapping and monitoring.

The SDS-WAS can play an important role in knowing when and where dust storms may occur, to allow health partners to plan more effectively and benefit from WMO global atmospheric monitoring and forecasting capacity on acute episodes of hazardous air quality – such as dust storms.

The World Meteorological Organization is the United Nations System’s authoritative voice ¨
on Weather, Climate and Water