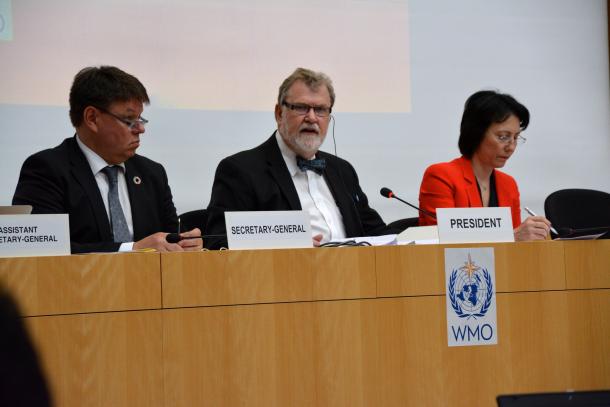 Geneva, 17 May 2017 – The annual meeting of the World Meteorological Organization (WMO) Executive Council concludes here today after adopting decisions aimed at enhancing weather, climate and hydrology services around the world.

Geneva, 17 May 2017 – The annual meeting of the World Meteorological Organization (WMO) Executive Council concludes here today after adopting decisions aimed at enhancing weather, climate and hydrology services around the world.

A particularly important issue, the need to strengthen aeronautical meteorological services, was addressed through a one-day special dialogue with representatives from the aviation sector. Aviation is one of the most weather-sensitive of all economic sectors. It is also changing rapidly. With air traffic doubling every 15 years, competition increasing and air safety more important than ever, the demand for an expanded array of national and regional weather services is rising.

“Aviation is the biggest customer for most national meteorological services. It provides the income that allows them to maintain their services and their observing systems,” said WMO Secretary-General Petteri Taalas.

“Major changes are taking place in the aviation sector, and we need to change also to meet our customers’ needs,” he said.

The Council launched work on preparing the WMO Strategic Plan 2020-2023, which will set the priorities and guide the activities of WMO for this upcoming four-year period. The Plan will be finalized and adopted  by the World Meteorological Congress, which is the ultimate authority for WMO, when it next meets in 2019.

The Council promoted reform of the WMO Constituent Bodies and their working practices in order to enhance the quality and quantity of services they provide for Members. It also explored ways to engage private-sector actors in the activities of WMO.

Other decisions adopted by the Council seek to advance the flood forecasting capabilities of weather services, the space-based monitoring of weather and climate extremes, and the transition to the WMO Integrated Global Observing System (WIGOS). The Council also adopted the regular budget, which is financed by assessed contributions, for the 2018-2019 biennium.

The launch of The Year of Polar Prediction occurred during the meeting. This initiative will run from mid-2017 to mid-2019 in order to cover an entire year in both the Arctic and Antarctic. It involves the World Meteorological Organization (WMO), Germany’s Alfred Wegener Institute (AWI) and a wide array of partners around the globe.

Professor Zeng Qingcun, a member of the Chinese Academy of Sciences, received WMO’s top award, the IMO prize, for his outstanding contribution to meteorology and climate science. He delivered a scientific lecture to the Council on “Monitoring, predicting and management of meteorological disasters.” Professor Gordon McBean of Canada was announced as the winner of the 62nd IMO Prize and will receive his award in 2018.

The Executive Council consists of the president, three vice-presidents, the six regional association presidents and 27 directors of National Meteorological and Hydrological Services serving in their personal capacities for the purposes of the WMO Convention. It met from 11 to 17 May 2016.