WMO expects above average temperatures, but no El Niño

WMO expects above average temperatures, but no El Niño

Geneva, 2 March 2020 - Above average temperatures are expected in many parts of the globe in the next few months, even without the presence of a warming El Niño event, according to the World Meteorological Organization.

WMO’s El Niño/Southern Oscillation (ENSO) Update said that there is a 60% chance of ongoing ENSO-neutral conditions continuing during March-May 2020. The chances for an El Niño or La Niña are 35% and 5% respectively. For the June-August 2020 season, the chance for ENSO-neutral is 55%, that for El Niño is 20-25% and that for La Niña is also 20-25%.

The El Niño/Southern Oscillation is a naturally occurring phenomenon involving fluctuations of ocean surface temperatures in the equatorial Pacific, coupled with changes in the overlying atmospheric circulation. It has a major influence on weather and climate patterns and is linked to hazards such as heavy rains, floods and drought. El Niño typically has a warming influence on global temperatures, whilst La Niña has the opposite effect.

El Niño and La Niña are not the only naturally occurring phenomena that drive global climate patterns. WMO has therefore introduced a new Global Seasonal Climate Update, currently in a trial phase, which factors in other climate drivers such as the Indian Ocean Dipole.

The Global Seasonal Climate Update said that above average sea surface temperatures are likely across sizeable portions of the globe, both in the tropics and extra-tropics. As a result, the forecast for March-May 2020 leans towards above-normal land temperature, particularly at tropical latitudes. 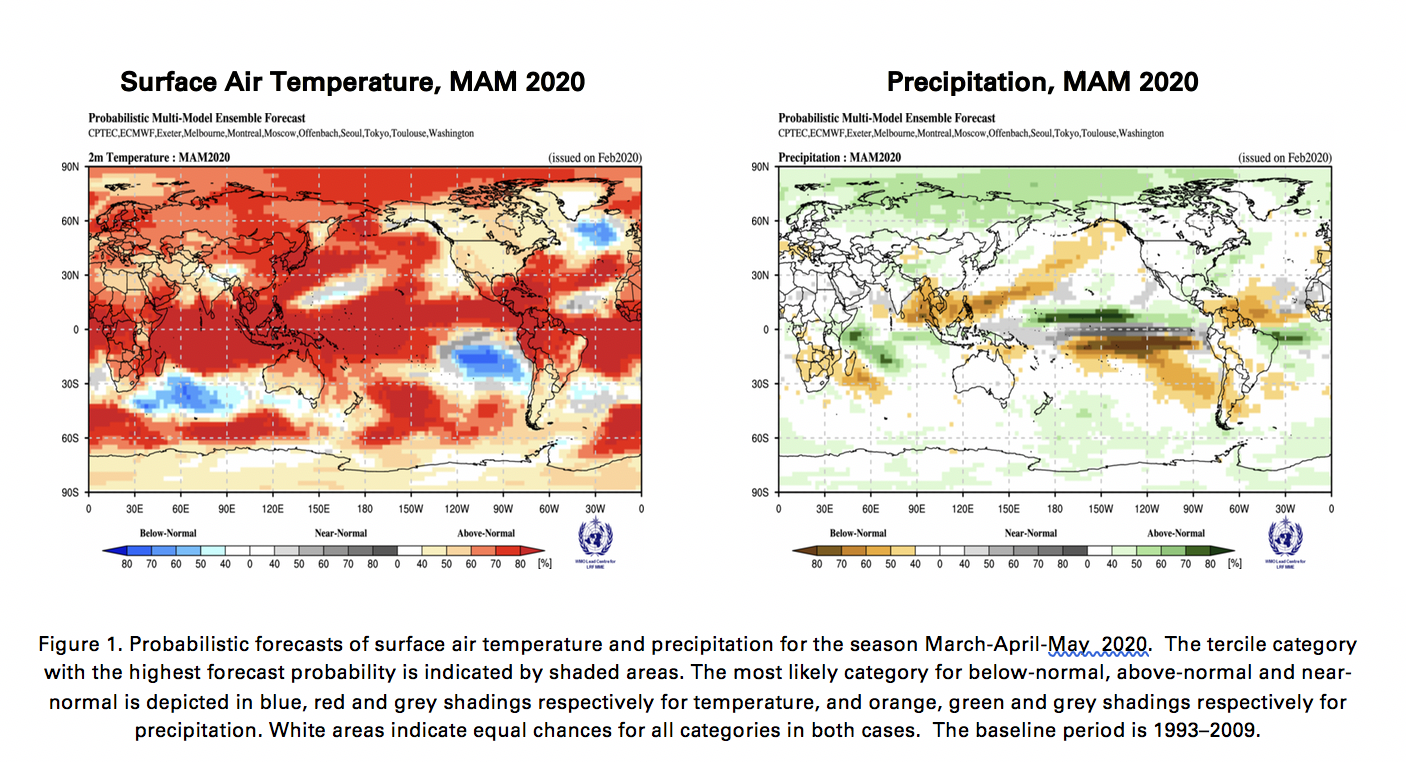 “Even ENSO neutral months are warmer than in the past, as air and sea surface temperatures and ocean heat have increased due to climate change. With more than 90% of the energy trapped by greenhouse gases going into the ocean, ocean heat content is at record levels,” said WMO Secretary-General Petteri Taalas.

“Thus, 2016 was the warmest year on record as a result of a combination of a strong El Niño and human-induced global warming. 2019 was the second warmest year on record, even though there was no strong El Niño. We just had the warmest January on record. The signal from human-induced climate change is now as powerful as that from a major natural force of nature,” said Mr Taalas.

Even though ENSO neutral conditions have prevailed since last July, there was a strong positive phase of the Indian Ocean Dipole (IOD) – sometimes known as the “Indian Niño.” This was linked to drought which contributed to bush fires in Australia, and above average rainfall and flooding in Eastern Africa, the latter setting the scene for the current desert locust crisis in the region. The Indian Ocean Dipole is now neutral.

Above normal precipitation is expected just north of the equator in the central tropical Pacific and southwestern Indian Ocean extending into eastern equatorial Africa. Elevated probabilities of below-normal precipitation extend over much of the rest of the western tropical and extratropical Pacific. Below-normal precipitation is also likely for northern South America, Central America and the Caribbean, and southern Africa, according to WMO’s Global Seasonal Climate Update.  Southeast Asia, Oceania and western Australia, as well as southern Africa, Central America and the Caribbean, all also experienced drier to much drier than normal anomalies over the preceding November-January season.  An outlook for continued dry conditions in these sub-regions suggests that they should be closely monitored in the coming months.

WMO Global Seasonal Climate Updates are based on climate model predictions around the world from WMO Global Producing Centres of Long Range Forecasts.

Both tools are used by planners within the United Nations system, and complement information issued by National Meteorological and Hydrological Services, WMO Regional Climate Centres and Regional Climate Outlook Forums as a source of information for country-level decision-making by disaster managers, for planning in climate-sensitive sectors, and by governments.