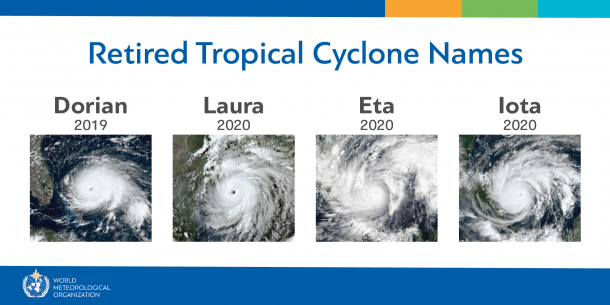 Geneva, 17 March 2021 - The World Meteorological Organization’s Hurricane Committee has retired Dorian (2019) and Laura, Eta and Iota (2020) from the rotating lists of Atlantic tropical cyclone names because of the death and destruction they caused. It also decided that the Greek alphabet will not be used in future because it creates a distraction from the communication of hazard and storm warnings and is potentially confusing.

The Hurricane Committee, which serves North America, Central America and the Caribbean (WMO Regional Association IV), agreed to the changes in its naming convention at its virtual session from 15 to 17 March. The meeting reviewed the record-breaking 2020 Atlantic season and fine-tuned preparations for 2021, including the provision of forecasts and warnings, as well as impact assessments, for wind, storm surge and flooding hazards.

The 2020 season got off to an early and rapid start with a record nine named storms from May through July. It ended late, with two major hurricanes in November for the first time on record and at a time when the season is normally winding down. The season was so active that WMO’s 21-name rotating list was exhausted and the Greek alphabet was used for only the second time (the first time was in 2005).

"The RA-IV Hurricane Committee's work is critical to keep our nations coordinated well before the next storm threatens", said Ken Graham, Hurricane Committee Chair and National Hurricane Center Director. "Hurricanes don't care about international boundaries. We all face similar dangers from tropical systems. Impacts from a single storm can affect multiple countries, so it is critical we have a plan, coordinate our efforts, and share challenges and best practices".

Although the naming convention is only a small part of the Hurricane Committee’s life-saving work, it attracts the most public attention. Atlantic tropical cyclone name lists repeat every six years unless a storm is so deadly or costly that its name is retired from future lists.

In total,93 names have now been retired from the Atlantic basin list since 1953, when storms began to be named under the current system. 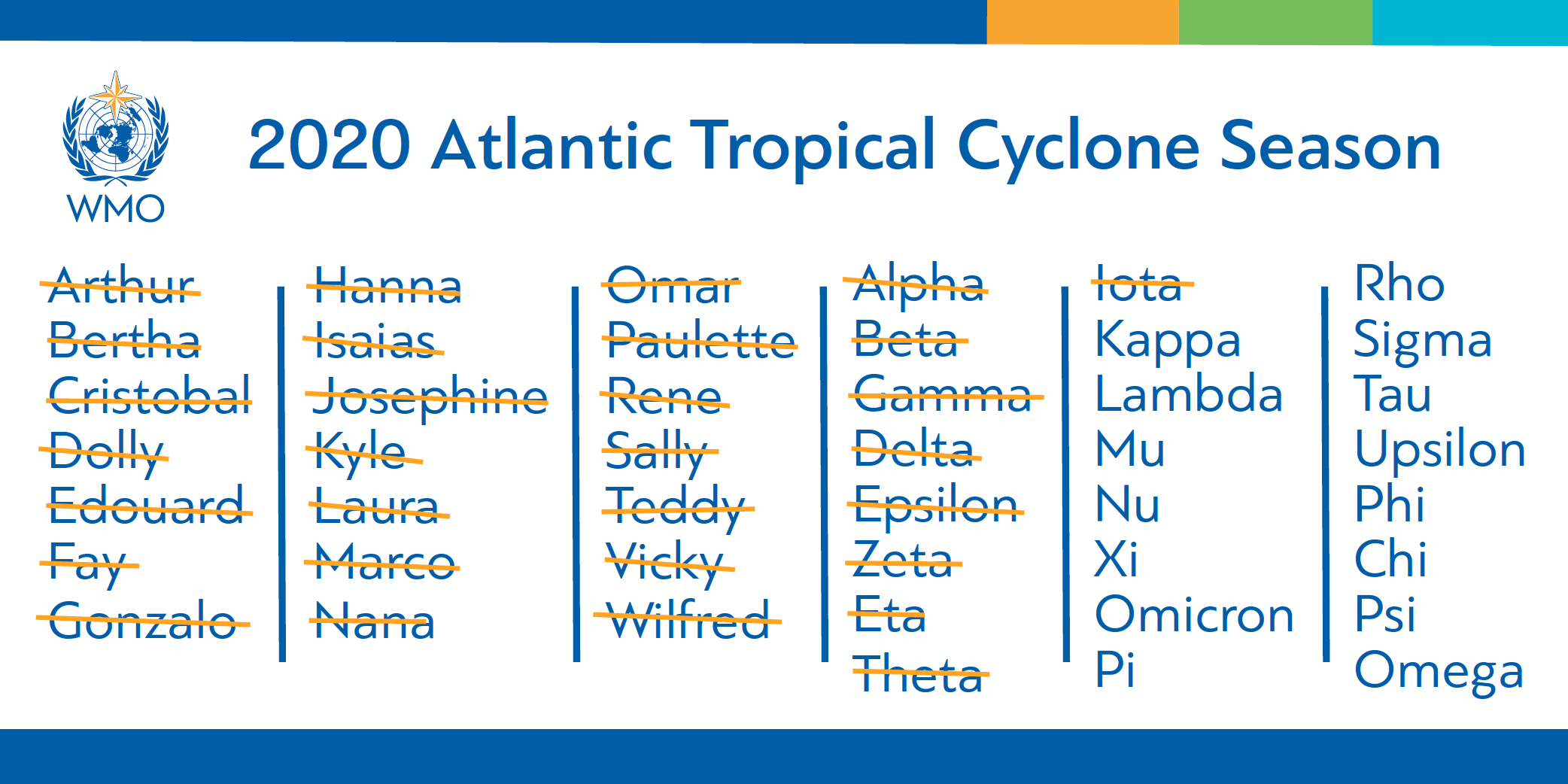 2019 - Dorian
Dorian was a Category 5 hurricane (on the Saffir-Simpson Hurricane Wind Scale) and the strongest hurricane to hit the northwestern Bahamas in modern records. Dorian caused catastrophic damage mainly in Abaco and eastern Grand Bahama Islands with total damage estimated at $3.4 billion (USD). More than 75 percent of all homes on the island were damaged. The Inter-American Development Bank (IDB), an agency which the government of the Bahamas asked to conduct a study following Dorian’s trail of destruction, stated that the hurricane left 29,500 people homeless and/or jobless.

Dexter will replace Dorian on the list of names in 2025.

2020 - Laura
Laura was a powerful category 4 hurricane (on the Saffir-Simpson Hurricane Wind Scale) that made landfall near Cameron, Louisiana, accompanied by a devastating storm surge of at least 5 meters (17 feet) above ground level.  It was responsible for 47 direct deaths in the United States and Hispaniola, and more than $19 billion in damage.

Leah will replace Laura on the list of names in 2026.

2020 - Eta & Iota
Hurricanes Eta and Iota both made landfall less than two weeks apart during November 2020 in the same area of the Nicaraguan coast just south of Puerto Cabezas. The two powerful tropical cyclones caused extensive flooding in Nicaragua, Honduras and other adjacent Central American countries, resulting in at least 272 fatalities and damage losses of more than $9 billion.

The annual name list has been exhausted on two occasions during the past 15 years, and it is likely that this will occur again in the future.

Hurricane Committee members agreed to create a supplemental list of names A-Z (excluding Q, U, as well as X, Y, and Z on the Atlantic list) that would be used in lieu of the Greek alphabet when the standard list is exhausted in a given season. Names on this list could be retired and replaced, when required. Names beginning with Q, U, X, Y and Z are still not common enough or easily understood in local languages to be slotted into the rotating lists.

The 2020 season showed that there were a number of shortcomings with the use of the Greek alphabet.

A supplemental list of Atlantic tropical cyclone names in lieu of using the Greek Alphabet was agreed by the committee.