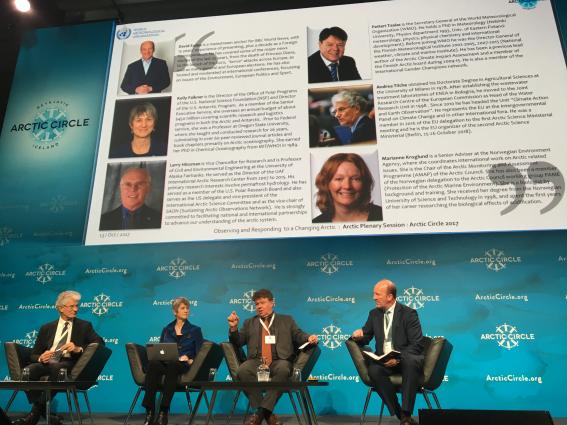 Observing and responding to a changing Arctic

World Meteorological Organization initiatives to strengthen observations and predictions of weather, climate and ice conditions in response to rapid climate change in the Polar regions were showcased at the Arctic Circle Assembly in Iceland.

WMO Secretary-General Petteri Taalas joined leading global experts at a plenary session on Observing and Responding to a Changing Arctic on the opening day of the assembly on 13 October.

The Arctic Circle Assembly, which takes place in Reykjavik, is the largest annual international gathering on the Arctic. It is attended by more than 2,000 participants, including government and business leaders, scientists and environmentalists and indigenous representatives from around 50 countries.

The effects of global warming due to greenhouse gas emissions are felt more intensely in the Arctic than almost anywhere else. The Arctic is heating twice as rapidly as the rest of the world, causing melting of glaciers, shrinking sea ice and snow cover.

“What happens at the Arctic doesn’t stay at the Arctic but affects the entire globe,” said Mr Taalas in a comment repeatedly stressed by all the panel members.

“Warming Arctic air masses and declining sea ice are believed to affect ocean circulation and the jet stream. This may affect weather and climate conditions in countries which are home to hundreds of million people,” he said.

Global average temperatures are now 1.1 °C above the pre-industrial era, and the rate of increase in the Arctic is much higher. 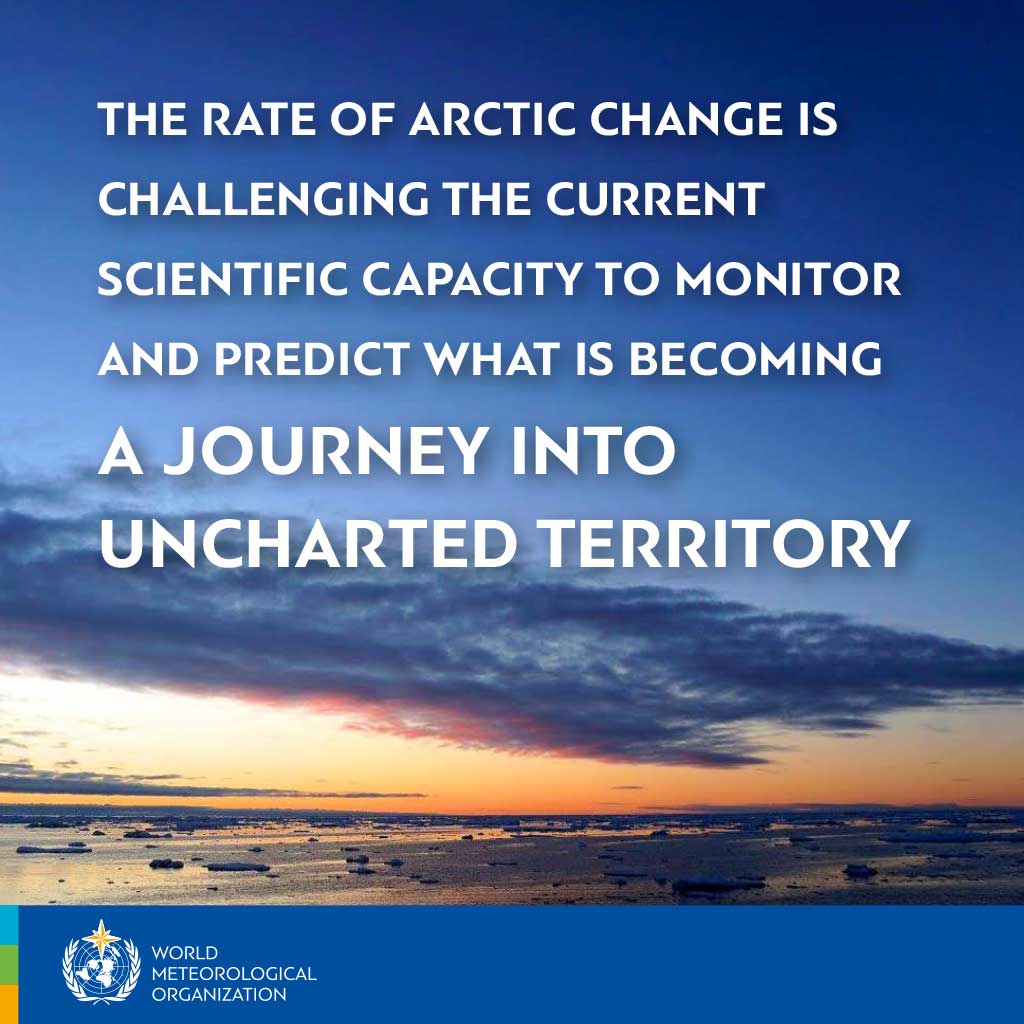 Rapid climate change is making the Arctic more accessible, leading to increased human activities such as transportation, tourism, fisheries are and natural resource exploitation and extraction.

“Less ice does not mean less danger,” says Mr Taalas. “We urgently need to improve weather and climate services and forecasts of ocean and ice conditions to minimize risks to the environment and society, including traditional indigenous livelihoods, and improve safety management in polar regions,” he says.

Weather forecasting advances taken for granted elsewhere in the world are struggling to keep up with the pace of Arctic change.  The Arctic is one of the world’s most poorly observed regions because of the harsh environment, remoteness and high costs. These shortfalls hinder the development of services necessary to meet social and environmental changes.

WMO is spearheading a number of Arctic initiatives, including the ongoing Year of Polar Prediction, which is a concerted drive by a large international and interdisciplinary network of scientists and operational forecasting centers to undertake intensive observation and modeling activities in the Arctic and Antarctic.

Coordinated field campaigns will from mid-2017 to mid-2019 will raise the number of observations in both polar regions. During special observing periods, the number of routine observations, for example through weather balloon launches from meteorological stations and buoy deployments from research vessels, will be enhanced; coordinated aircraft campaigns and satellite missions will be carried out; and new automatic weather stations will be installed at different polar locations.

The plenary session on 13 October was moderated by David Eades of the BBC. It included a short introductory video from HSH Prince Albert II of Monaco, whose Foundation seeks to protect the environment and encourage sustainable development. It focuses on cliamte change, biodiversity and water.

All the speakers stressed the need for more observations and scientific research, given the global impact of Arctic change. And all stressed the collective responsibility to take urgent action to combat climate change, which is altering the Arctic environment and taking it into uncharted territory.

Even with full implementation of the Paris Agreement on climate change, the Arctic will still look a very different place in the middle of the century compared to now. 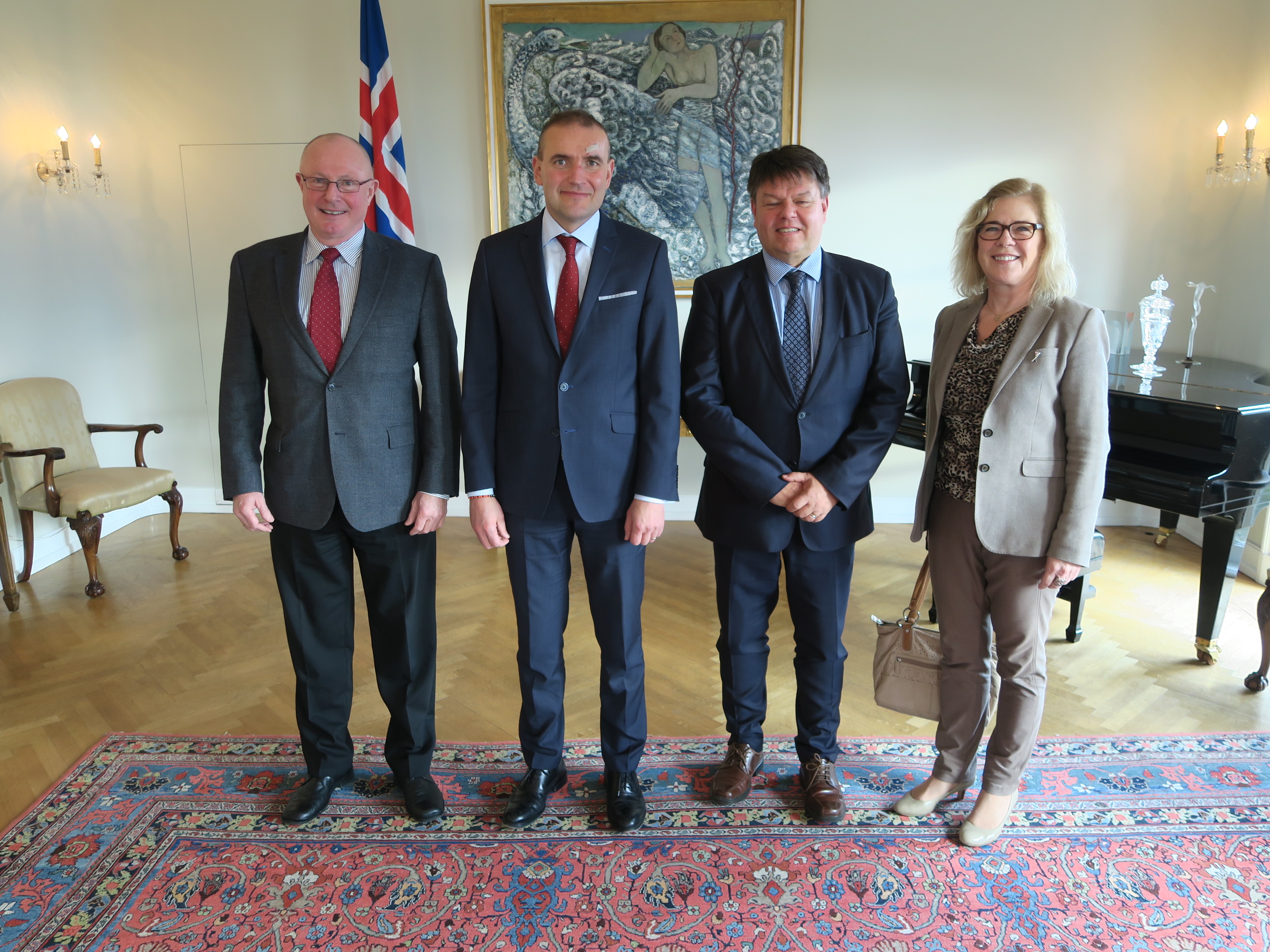 Iceland, which is host to the Arctic Circle Assembly, is a poster child for climate change mitigation because it is now powered entirely by renewable energy through geothermal power.  But also highlights the challenges of climate change because, if the “business as usual approach” continues, there is the risk that all the nation’s glaciers will melt within 200 years.

Mr Taalas met with Iceland’s President Guðni Th. Jóhannesson, and a number of other dignatories, on the sidelines ot the meeting.