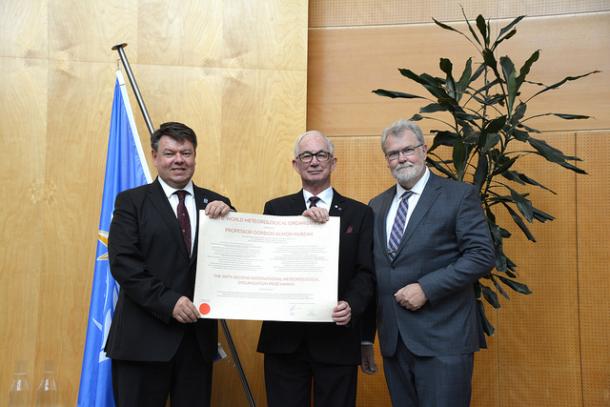 The World Meteorological Organization has presented its top award to Gordon McBean of Canada for his outstanding work in meteorology and climatology and his leadership as a scientific researcher. Mr McBean is currently President of the International Council for Science.

The IMO Prize is the equivalent of the Nobel prize for meteorology. Established in 1955 and named after the predecessor of the WMO, the International Meteorological Organization (IMO), it is awarded every year by WMO Executive Council.

“Doctor McBean is an outstanding scientist and most deserving of our highest award. For more than fifty years, he has been engaged in meteorology, atmospheric and climate sciences, and climate change,” said WMO President David Grimes.

“From his early career as a weather forecaster and research scientist with Transport Canada and Environment Canada, Dr. McBean has built on his accomplishments as a researcher, with breakthrough discoveries in the atmospheric boundary layer and storms over the oceans; as a leader in international and national science and committees; and as an innovator in cross-disciplinary science in disaster risk reduction and climate change adaptation, and associated societal impacts,” said Mr Grimes.

He outlined how science and technology supports sustainable development, disaster risk reduction and climate change mitigation and adaptation. The number of disasters due to floods and storms is going up and climate change is a key factor. Given that hazards are increasingly interconnected, there needs to be an integrated approach embracing physical and social scientists, engineers, economists, health experts and many others, he said.

“We need integrated assessments and information to address the combined risk and reduce the impacts of these events,” he said.

“We need seamless scientific modelling and prediction across all time scales, from now to decadal and century long climate scales, and for all issues,” Mr McBean said in his lecture.

“Extending the weather forecasts to forecasts of weather, flood, ocean and ice, smog and other forecastable issues and extending the longer time scale prediction to climate, oceans, cryosphere, land ecosystems and the full environment uses shared resources and has mutual benefits,” he said.

Mr McBean led global efforts to raise awareness about climate change impacts. He was chair of the World Climate Research Programme from 1988-1994. He played a key role in the development of the Intergovernmental Panel in Climate Change (IPCC) and was awarded the Nobel Peace Prize as an IPCC contributor in 1997.

As Assistant Deputy Minister at Environment Canada, he was an elected Member of WMO Executive Council from 1994-2000. During his time as the head of Canada’s meteorological service, he promoted his vision of moving from weather, water and climate forecasts to environmental predictions.

After the Indian Ocean tsunami tragedy in 2004, he chaired the scoping and planning committee which led to the establishment of the Integrated Research on Disaster Risk (IRDR) Program.

More recently, his work has been cross-disciplinary, addressing the challenges of integrated research on disaster risk weather and climate and the relationships between climate extremes and housing rights in communities in Africa. He has also completed a 5-year study of coastal cities at risk due to weather, climate and flooding – with teams in Bangkok, Manila, Lagos and Vancouver – in order to develop urban resilience models.

His firm belief in the importance of cross-disciplinary approaches and integration of the social and physical sciences is demonstrated by his role in the merging of the International Council for Science (ICSU) and the International Social Sciences Council, which will become the new International Science Council on 4 July 2018.

He has published in 72 peer-reviewed journals and contributed to 42 books and 65 other publications.

Mr McBean said an integrated, multi-disciplinary approaches would enable society to “see the future and address the 2030 Global Agenda as an issue of intergenerational and international equity and ethics.”

“We need to do this for our children and grandchildren, around the world.  Symbolically we need to build on science for their benefits, …. And as scientists we need to work together to support our world.    Let’s move forward together and stop just reading proclamations in front of the advancing tsunami,” said Mr McBean.