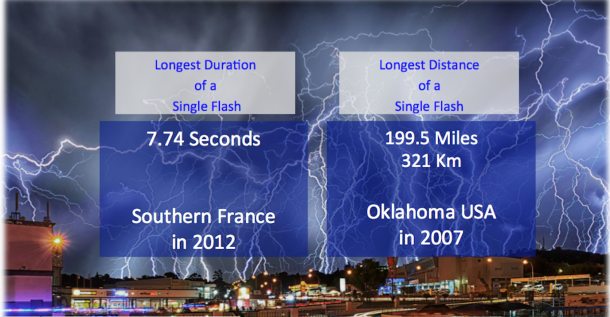 The lightning flash over Oklahoma in 2007 covered a horizontal distance of 321 kilometers (199.5 miles). The lightning event over southern France in 2012 lasted continuously for 7.74 seconds, the WMO evaluation committee found.

“Lightning is a major weather hazard that claims many lives each year,”  said WMO Secretary-General Petteri Taalas. ”Improvements in detecting and monitoring these extreme events will help us improve public safety.”

It is the first time that lightning has been included in the official WMO Archive of Weather and Climate Extremes, which is maintained by the WMO Commission for Climatology and documents details of records for heat, cold, wind speed, rainfall and other events.

Full details of the assessment are given in an Early Online Release posting of the article published on 15 September. The article will be formally published in an upcoming issue of the Bulletin of the American Meteorological Society."

Dramatic improvements in lightning remote sensing techniques have allowed the detection of previous unobserved extremes in lightning occurrence and so enabled the WMO committee to conduct a critical evaluation.

The WMO evaluation committee judged that the world’s longest detected distance for a single lightning flash occurred over a horizontal distance of 321 km (199.5 miles) using a maximum great circle distance between individual detected VHF lightning sources.  The event occurred on 20 June 2007 across the state of Oklahoma.

The committee also accepted the world’s longest detected duration for a single lightning flash as a single event that lasted continuously for 7.74 seconds on 30 August 2012 over Provence-Alpes-Côte d'Azur, France.

“This investigation highlights the fact that, because of continued improvements in meteorology and climatology technology and analysis, climate experts can now monitor and detect weather events such as specific lightning flashes in much greater detail than ever before,” said Randall Cerveny, chief Rapporteur of Climate and Weather Extremes for WMO.

The investigating committee was composed of lightning and climate experts from the United States, France, Australia, Spain, China, Morocco, Argentina, and the United Kingdom.  As part of their evaluation, the committee also unanimously agreed that the existing formal definition of “lightning discharge” should be amended to a "series of electrical processes taking place continuously" rather the previously specified time interval of one second.  This is because technology and analysis have improved to the point that lightning experts now can detect and monitor individual lightning flashes with lifetimes much longer than a single second.

Validation of these new world lightning extremes (a) demonstrates the recent and on-going dramatic augmentations and improvements to regional lightning detection and measurement networks, (b) provides reinforcement to lightning safety concerns that lightning can travel large distances and so lightning dangers can exist even long distances from the parent thunderstorm, and (c) for lightning engineering concerns.