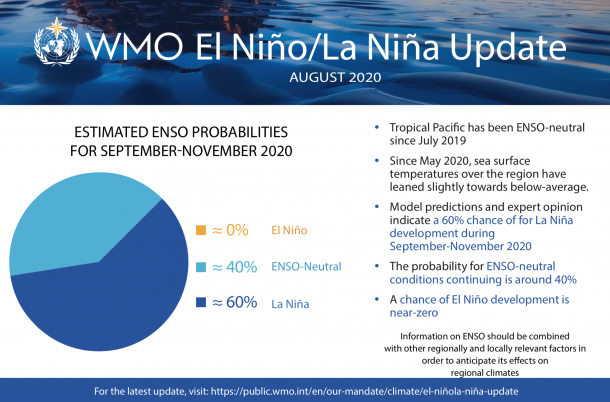 Geneva, 27 August 2020 - There is a 60 percent chance of a weak La Niña event developing during September to November 2020, according to a new El Niño/La Niña update from the World Meteorological Organization. Despite the tendency for La Niña to have a cooling effect on global temperatures overall, above-average temperatures are expected to be predominant.

The El Niño/Southern Oscillation (ENSO) is a naturally occurring phenomenon involving fluctuations of ocean surface temperatures in the equatorial Pacific, coupled with changes in the overlying atmospheric circulation. It has a major influence on weather and climate patterns and associated hazards such as heavy rains, floods and drought. El Niño typically has a warming influence on global temperatures, whilst La Niña has the opposite effect.

“Even if a La Niña event does develop, its cooling signal will not be enough to counterbalance the impact of human-induced climate change,” said WMO Secretary-General Professor Petteri Taalas.

“2020 remains on track to be one of the warmest years on record, with much extreme weather ranging from scorching temperatures and wildfires to devastating floods and marine heatwaves,” he said. “This is largely the result of greenhouse gases rather than naturally occurring climate drivers,” said Prof. Taalas.

WMO’s Global Seasonal Climate Update, which complements the El Niño/La Niña bulletins, indicates that sea surface temperatures for September to November 2020 overall are expected to be above average for much of the globe and this will influence land surface temperatures.

Taking into account La Niña and other influences on regional climates, for the September-November period the Global Seasonal Climate Update also indicates elevated probabilities for below-normal seasonal rainfall in the Horn of Africa and Southern Africa and across the western and southeast Pacific, as well as across central North America. Conversely, elevated probabilities of above-normal rainfall are seen across south and southeast Asia and parts of Australia.

Below average sea surface temperatures are forecast in the eastern tropical Pacific, possibly reaching La Niña thresholds before the fourth quarter of 2020.

Model predictions and expert opinion indicate a 60% chance of La Niña development during September-November 2020, while that for ENSO-neutral conditions continuing is 40% and for El Niño is near 0%. Chances for La Niña decrease to 55% for the December-February 2020-21 period.

The last La Niña was in 2017-18. It was a short-lived weak-to-moderate event that started developing in November 2017 and decayed in April 2018. 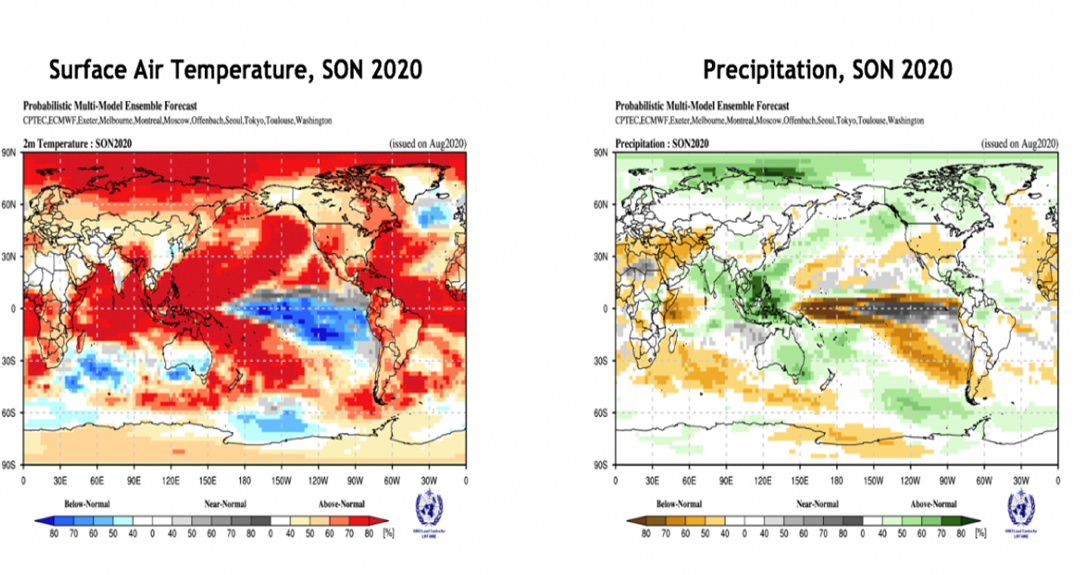 Notes for Editors
The impacts of each La Niña on global climate are never exactly the same: they depend on the intensity of the event, the time of year when it develops and the interaction with other climate drivers – both naturally occurring and as a result of human influence.
La Niña is often associated with wet conditions in eastern Australia, Indonesia, the Philippines and Thailand. It usually leads to increased rainfall in Colombia and other northern parts of South America, also in southern Africa.
Drier than normal conditions are generally observed along coastal Ecuador and North Western Peru, Uruguay and parts of Argentina, as well as in equatorial East Africa – for instance Somalia and eastern Kenya.
La Niña episodes feature a very wave-like jet stream flow over the United States and Canada in the northern winter, with colder and stormier than average conditions across the North, and warmer and less stormy conditions across the South.
Please consult your National Meteorological and Hydrological Service for further information.
The Global Seasonal Climate Update is in pre-operational phase.