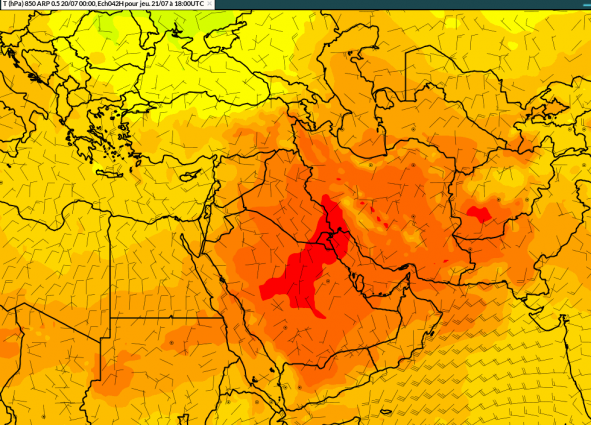 The World Meteorological Organization (WMO) has officially evaluated temperature record extremes of 54.0 °C at two locations, one in Mitribah, Kuwait, on 21 July 2016 and a second in Turbat, Pakistan, on 28 May 2017.

In its most intensive evaluation ever undertaken, the WMO Archive of Weather and Climate Extremes, has verified the Mitribah observation as 53.9 °C (± 0.1 °C margin of uncertainty) and the Turbat one as 53.7 °C (± 0.4 °C).

Full details of the assessment are given in the on-line issue of the International Journal of Climatology published on 17 June 2019.

“This investigation highlights the fact that we can now conduct extremely in-depth analyses of weather extremes. Rigorous investigations such as this independent temperature sensor calibration give us much higher confidence in our existing climate records and consequently provide a solid basis for examining   records being broken around the world and for studies of attribution of extremes to climate change,” said Randall Cerveny, chief Rapporteur of Climate and Weather Extremes for WMO.

“The end result adds to our existing archive of global, hemispheric and continental temperature extremes.  This database provides  a critical information source for understanding of  how extreme the climate and weather of our planet can be, when and  where it occurs,“ he said.

According to the Weather and Climate Extremes archive, the hottest temperature ever recorded was in Furnace Creek, Death Valley, California at 56.7°C on 10 July 1913. The highest temperature for the Eastern hemisphere was set in July 1931 in Kebili, Tunisia, at 55.0°C. Some weather historians have questioned the accuracy of old temperature records. The WMO Archive for Weather & Climate Extremes is always willing to investigate any past extreme record when new credible evidence is presented.

This evaluation is unique in that the committee recommended that both sensors be independently calibrated and simultaneously compared to ensure that the data were as accurately obtained as possible.  This additional request had never been made in prior WMO evaluations of a record weather observation.  It sets a new and higher standard of validity than any previously accepted extreme.

The investigating committee was composed of metrology (instrument) and climate experts from Italy, Kuwait, Pakistan, Saudi Arabia, France, Spain, Morocco, Egypt, Turkey, Armenia, Iran, Australia, United States, and the United Kingdom.  In particular, a group at the Istituto Nazionale di Ricerca Metrologica (INRIM), under the direction of Andrea Merlone, was instrumental in conducting a detailed and rigorous calibration analyses of the two temperatures sensors graciously sent by the national weather services of the countries of Kuwait and Pakistan, respectively as part of the investigation.