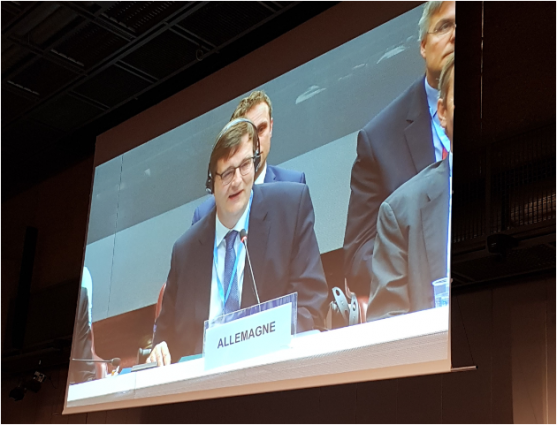 Mr Adrian will preside over sessions of the Congress and the Executive Council held during his term of office and guide and coordinate WMO activities, and issue directives to the Secretary-General with respect to the fulfilment of the latter’s duties.

Mr Adrian will take up office at the end of the World Meteorological Congress on 14 June. He succeeds David Grimes, Assistant Deputy Minister and head of Environment and Climate Change Canada's Meteorological Service. Mr Grimes has served two four-year terms as President.

“The WMO sets the framework for the successful cooperation of its Member States to accomplish their tasks for the well-being of societies. Fulfilling this important duty is based on the global meteorological infrastructure coordinated by WMO,” said Mr Adrian.

“My aim is that this infrastructure as well as the indispensable global exchange of data are improved even further and guaranteed into the future. It is our collective responsibility and my main interest to strengthen the WMO,” he said.

Mr Adrian said that the election was also recognition of Germany’s commitment to international efforts to build resilience against extreme weather and adapt to climate change.

The World Meteorological Congress is meeting from 3 to 14 June to agree on future strategy and tools to help countries increase resilience to extreme weather, water, climate and other environmental shocks, to strengthen scientific observations and predictions and to close capacity gap.

The Congress takes place every four years and decides on the strategy, policies, standards, budget and office holders of the 193-member World Meteorological.

Organization (WMO). This year it is discussing a sweeping reform of WMO’s governance structures to address major risks and meet the challenges of a rapidly changing world.

Mr Taalas has overseen the drive for reform of WMO and formulation of a new strategic plan in order to optimize the use of Member and Secretariat resources while meeting the global and future challenges for weather, climate and water services as well as closing the research to application gap. He has also coordinated a plan for private sector engagement in WMO activities and strengthened partnership agreements with major development agencies to deliver concrete action to enhance support for climate adaptation and early warning services.

“Climate change and natural hazards are major challenges for humanity this century,” said Mr Taalas. “WMO supports climate change mitigation by providing scientific facts based on measurements and model calculations for decision makers. WMO plays a major role in climate adaptation through multi-hazard early warning services. WMO serves as a platform to transfer know-how from developed meteorological and hydrological services to less developed ones,” he said.

Mr Taalas has enhanced global visibility of WMO in the weather, climate, water and environmental arena as the Organization with essential scientific expertise for sustainable development. He took on the role of UN Climate Principal, providing regular scientific input to the UN Secretary-General and contributing actively to sessions of the UN Framework Convention on Climate Change Conference of the Parties.

He is co-chair of the Climate Science Advisory Group to guide preparations for the 2019 Climate Action Summit. This includes advice on scientific studies and findings to raise awareness of key scientific facts with leaders, policy makers and other stakeholders.