World Meteorological Day celebrates the Sun, the Earth and the Weather 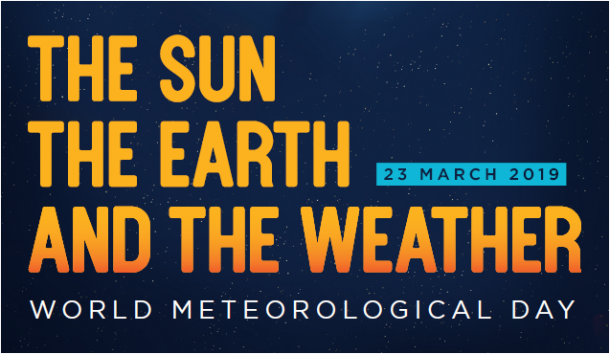 World Meteorological Day celebrates the Sun, the Earth and the Weather

The Sun, the Earth and the Weather is the theme of this year’s World Meteorological Day. It   highlights the role of the Sun in delivering the energy that powers all life on Earth, and drives the weather, ocean currents and the hydrological cycle.

World Meteorological Day on 23 March celebrates the anniversary of the convention establishing WMO in 1950 and showcases the essential contribution of the WMO community to the safety and wellbeing of society.

National Meteorological and Hydrological Services provide expertise and services both to harness the power of the Sun and to protect us from it. These include 24/7 weather observations and forecasts, as well as monitoring of atmospheric greenhouse gases, ultraviolet radiation, aerosols and ozone and their consequent effects on people, climate, air and water quality and marine and terrestrial life.

Sunlight plays a pivotal role in human health and well-being. Too little Sun impacts our mood and well-being and increases the risk of Vitamin D deficiency. Overexposure to sunlight causes harmful effects on the skin, eyes, and immune system. Experts believe that four out of five cases of skin cancer could be prevented, as UV damage is mostly avoidable.

The ultraviolet index or UV Index is an international standard measurement of the strength of sunburn-producing ultraviolet radiation at a particular place and time. Many national meteorological services provide information and alerts on UV levels, and work with health authorities to disseminate safety tips to the public

Located nearly 150 million kilometres from the Earth, the sun is the heart of our solar system and keeps our planet warm enough for living things to thrive. For over 4.5 billion years, this hot ball of glowing plasma has been the driving force behind weather, climate and life on Earth.

Since the end of the last Ice Age some 12,000 years ago, our climate has been fairly stable, although it has often been affected by small changes in the amount of solar radiation reaching the Earth’s surface. Even these small changes have profound consequences.

About half the sunlight reaching Earth's atmosphere passes through the air and clouds to the surface, where it is absorbed and then radiated upward in the form of infrared heat. Much of this heat is absorbed by the greenhouse gases and radiated back in all directions, warming the surface of the Earth and the lower atmosphere.

Without this natural greenhouse effect, the Earth’s average surface temperature would be an inhospitable -18 degrees Celsius (0 °F) instead of the approximately 14 degrees Celsius (59 °F) we experience today.

“Satellite measurements taken over the past 30 years show that the Sun’s energy output has not increased and that the recent warming observed on Earth cannot be attributed to changes in the Sun’s activity, according to WMO Secretary-General Petteri Taalas.

“The rise in temperatures – which are melting ice and heating the oceans – is driven by long-lived greenhouse gases in the atmosphere. Carbon dioxide concentrations reached 405.5 parts per million in 2017 and continue to rise.,” he said.

“If the current trend in greenhouse gas concentrations continues, we may see temperature increases of 3 °C to 5 °C by the end of the century. This is well above the target of the Paris Agreement of the United Nations Framework Convention on Climate Change, which aims to hold the global average temperature increase to below 2 °C and as close as possible to 1.5 °C,” said Mr Taalas.

The 20 warmest years on record have been in the past 22 years, with the top four in the past four years.

The sun provides us with a valuable tool for climate change mitigation in the form of solar energy, which is becoming cheaper and more widely available and has the potential to replace fossil fuels like coal or oil as a major source of electricity. Energy can be harnessed directly from the sun, even in cloudy weather. Solar energy is increasingly popular for generating electricity and heating and desalinating water. Renewable energy, including solar energy, has become the technology of choice, making up almost two-thirds of global capacity additions to 2040 thanks to falling costs and supportive government policies. This is transforming the global power mix, with the share of renewables in generation rising from 25% today to over 40% by 2040, according to the International Energy Agency

Photovoltaics (PV), also called solar cells, are electronic devices that convert sunlight directly into electricity. These solar cells can be seen everywhere – on roofs and windows of houses and office buildings, battery chargers and computers, new cars and airplanes, solar farms – the list is endless. Today, PV is one of the fastest-growing renewable energy technologies and is ready to play a major role in the future global electricity generation mix.

Power generation from photovoltaics is strongly dependent on the weather. Therefore, reliable meteorological forecasts are indispensable for balancing the power grid and will gain even more importance as the renewable energy sector expands. For this reason, weather forecasts optimized for energy applications are required. The requirements from the energy sector pose a new challenge and opportunities for national meteorological services.

Action to protect the stratospheric ozone layer, which protects humans from dangerous ultraviolet and other forms of radiation from the Sun, shows the benefits of concerted international commitment.

In the mid-1980s it was discovered that the ozone shield was being depleted well beyond natural processes as a result of chlorine and bromine atoms coming into contact with ozone and destroying ozone molecules.

The discovery of the ozone hole led to international action to phase out the most damaging chemicals such as chlorine-releasing chlorofluorocarbons (CFCs), used in in refrigeration and air conditioning, and bromine-releasing halons, used as fire-extinguishing agents. Thanks to measures taken under the Montreal Protocol on Substances that Deplete the Ozone Layer, the destruction of the stratospheric ozone layer has been halted.

At projected rates, Northern Hemisphere and mid-latitude ozone is scheduled to heal completely by the 2030s, followed by the Southern Hemisphere in the 2050s and polar regions by 2060.

The Montreal Protocol is the world’s most successful global environmental treaty and has also had tremendous health benefits.  By the end of this century, an estimated 100 million cases of skin cancer will have been avoided and many millions of extra cases of eye cataracts will have been prevented. By limiting ozone depletion, the treaty also protects the human immune function and protects food security by reducing UV damage to crops and marine life-supporting ecosystems vital for fisheries.

The WMO Statement on the State of the Climate in 2018 will be formally launched  at a joint press conference with the UN Secretary General  António Guterres, UN General Assembly President María Fernanda Espinosa Garcés and WMO Secretary-General Taalas on 28 March at UN headquarters in New York.  This report will provide a comprehensive overview of temperatures, high-impact events, and key indicators of long-term climate change such as increasing carbon dioxide concentrations, Arctic and Antarctic sea ice, sea level rise and ocean acidification. The report will be launched to coincide with a high-level event hosted by the President of the General Assembly.

The State of the Climate report includes information submitted by a wide range of United Nations agencies on human, socio-economic and environmental impacts as part of an effort to provide a more comprehensive, UN-wide policy brief for decision makers on the interplay between weather, climate and water and global development goals.

It is one of key contributions of WMO to the Climate Summit. Mr Taalas will also chair a Scientific Advisory Group to provide expert input for the Climate Action Summit convened by the UN Secretary-General for September 2019.

Animation on the occasion of the World Meteorological Day - English (+ subtitles)