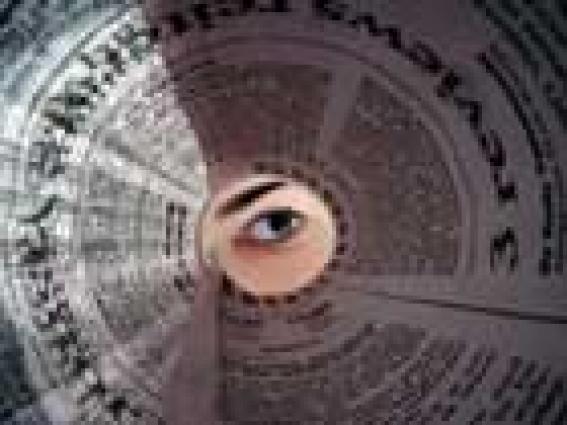 The extraordinary session of the World Meteorological Congress, held from 29 to 31 October, approved the Implementation Plan for the Global Framework for Climate Services. Eight fast track projects described in the Plan will serve to showcase the benefits of climate services for the improvement of livelihoods. The implementation structure includes five components across which activities will be coordinated and integrated:

Congress also approved a resolution to establish an Intergovernmental Board on Climate Services to ensure coordination at the regional and global levels and to engage the entire UN system and other stakeholders to deliver needs-based climate services all over the world. It will seek to ensure that the programmes of partners and the activities of the GFCS are aligned, and that a broad range of expertise is mobilized in order to serve the interests of the users of climate services. The Board will operate under the authority of the World Meteorological Congress.

A third resolution dealing with budgetary issues was also approved, stating the immediate importance of voluntary contributions by Member States to secure quick wins for the Framework. A strong desire was expressed for the sustainability of resources – a deliberation that will certainly continue at the 17th session of the World Meteorological Congress in 2015. 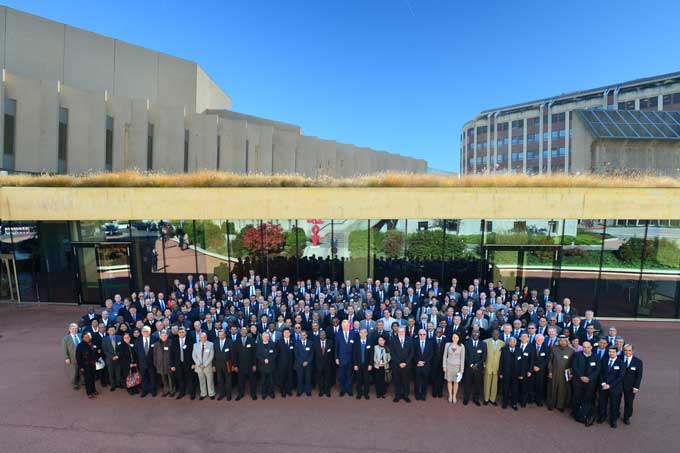 Participants at the Extraordinary Congress 2012

The Second Session of the African Ministerial Conference on Meteorology (AMCOMET) was held in Victoria Falls, Zimbabwe, from 15 – 19 October. Organized by the WMO, the African Union Commission and hosted by the Government of Zimbabwe, the conference attracted participants from 38 African countries, 35 of which were represented at the ministerial level. In her opening statement, the Vice-President of the Republic of Zimbabwe, Ms Joice Teurai Ropa Mujuru, underlined the importance of this new mechanism and pledged full support to the AMCOMET initiative, which will promote the development of meteorological and climate services in the African continent.

A report on activities since the inaugural Conference in Kenya highlighted the establishment of the AMCOMET Secretariat at WMO with the support of the African Union Commission; and the development of the draft Constitution and Rules of Procedures and the draft Integrated African Strategy on Meteorology (Weather and Climate Services) among others. The latter was reviewed and adopted by the Second Session.

The delegates were briefed on the Addis Ababa Declaration in support to the implementation of the Global Framework for Climate Services in Africa, which was signed by the African Union Commission, the Regional Economic Communities and the Secretariat of the Africa, Caribbean and Pacific Group of States. The delegates acknowledged the strong political support for implementation of the Global Framework for Climate Service in Africa and decided to include the declaration in the outcomes of the AMCOMET session.

The vision of AMCOMET is to create a framework to promote cooperation, security, socio-economic development and poverty eradication on a pan-African level through sound governance of the science of meteorology and its related applications. Its mission is to provide political leadership, policy direction and advocacy in the provision of weather, water and climate information and services that meet sector specific needs.

The next steps for AMCOMET include the adoption of the Constitution and Rules of Procedures and the development of a resource mobilization strategy and complementary implementation plan for the Integrated Strategy on Meteorology (Weather and Climate Services). AMCOMET further requested that a Task Force investigate the feasibility of developing an African Regional Space Programme. The Task Force will report on its findings to the Third Session of AMCOMET, expected to take place in Benin in 2014. 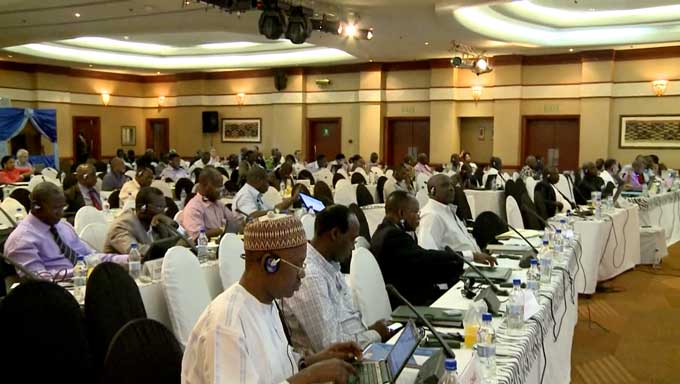 Participants at the Second Session of AMCOMET

The Indonesian Meteorological and Geophysical Agency hosted the fifteenth meeting of the Commission for Basic Systems (CBS‑15) in Jakarta from 10 – 15 September. A Technical Conference was scheduled during the event on the afternoon of 12 September and the morning of 13 September.

CBS-15 reviewed the draft Implementation Plan for the WMO Strategy for Service Delivery and offered comments towards its finalization. It also endorsed ongoing work to develop a competence framework for public weather forecasters and advisers and requested it be completed and presented to CBS-16 for approval in 2014. When complete, the framework will assist Members with their quality management systems and provide guidance on what should be expected from public weather service forecasters and advisers.

CBS-15 further consolidated the progress made by the WMO Information System (WIS), which became operational in January 2012, by approving the first list of National Centres that will provide the interface between national and international information exchanges. CBS-15 also recommended enhancements to the WMO metadata standard to add features that are needed to manage WIS. Members were encouraged to create and maintain WIS discovery metadata records.

CBS-15 took note of the success of the Severe Weather Forecasting Demonstration Project (SWFDP), originally implemented in Africa, which has enabled national weather services to exploit numerical weather forecast information to improve the national response to impending severe weather. CBS-15 deemed expansion of the project to more countries to be a high priority task and agreed that its coordination would require a project office in the WMO Secretariat.

The first session of the Technical Conference concentrated on the WMO Integrated Global Observing System (WIGOS), laying the foundation for the delegates to consider the implications of the WIGOS Implementation Plan on the work of the CBS. The aim of WIGOS is to produce a framework for designing, implementing and maintaining observing networks so that their outputs are interoperable, allowing even greater benefits to be delivered from current and future investments.

Public Weather Services are one of the primary ways of delivering the benefits of meteorology to governments and the public. The second component of the Technical Conference concentrated on explaining the value of the basic systems that underlie operational public weather services. Presentations by Members offered valuable advice to managers of National Meteorological and Hydrological Services.

CBS-15 was the shortest meeting of the Commission. The increased efficiency can be attributed to the use of electronic document preparation and distribution as well as the focused approach of all delegates. 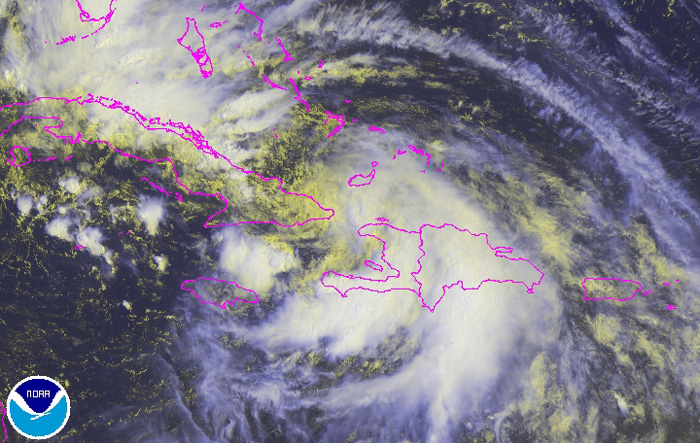 From June to November every year, tropical cyclones or low pressure depressions follow a course through the Greater and Lesser Antilles. Even though this year’s tropical storm season was predicted to be low in activity in the North Atlantic basin, Haiti remains particularly vulnerable to the risk of destructive winds and heavy rainfalls, which can cause flooding and widespread damage.

At present, Haiti does not have a programme that delivers reliable observational data of winds and precipitation. At the airport, there were periods when neither a wind anemometer or vane was working – a windsock was used to make an estimate that was used to estimate conditions over the whole country. This situation seriously handicaps weather analysis and forecasting. In addition, when it comes to making meteorological assessments after the passage of an important storm event, it is difficult to understanding what had really taken place.

In the absence of such observational data, weather satellites offer the best means of estimating the amount of precipitation that is associated with a storm’s passage, therefore, with the assistance of WMO and its Members in the immediate region, the National Meteorological Centre of Haiti can still issue warnings to alert government officials and the population. Tropical storm Isaac in August offers a good opportunity to look at how this was done. The full article in French is available in pdf.

Think Antarctica in winter and visions come of frozen seas bejewelled with icebergs, wind polished ice, meringue like sastrugi from horizon to horizon, and kilometre after endless kilometre of the purest driven snow – all delicately decorated in diaphanous shades of pink and cobalt blue. Think oases and wind blown sand and instead visions arise of a camel caravan wending its way to a date palm fringed pool of water in the endless erg sea of the North African hinterland. It seems unlikely that the two would ever come together, but there are several oases in Antarctica – none with sand dunes, camels or date palms. Oasis in this instance is used to refer to those few extensive areas of the Antarctic continent outside of the Peninsula that remain free of permanent ice and snow.

One of these is the Vestfold Hills region, part of the Australian territorial claim in East Antarctica. Located on the north-eastern margins of Prydz Bay, this area of just over 400 km2 is composed of east-west trending ridges whose peaks rarely exceed 150 m above sea level. The ridges are covered in boulders, rocks and sand with a few sporadic patches of moss and lichen. Myriads of lakes, both fresh and hyper-saline, as well as fjords, cross the region.

Australia’s Davis Station lies at the western edge of the Vestfold Hills, approximately 25 km from the current continental ice edge. There is prevailing strong wind from the north-east. Snowy precipitation is minimal, being on average equivalent to 70 mm of rainfall per annum. As a result, when gales arise and persist across the region, the image of a pristine, snowy Antarctica can be shattered. Snow often stops falling during these gales but the blizzard may continue as the wind lifts previously precipitated snow across the landscape. If the winds are strong enough, once the supply of snow has been exhausted, the bare Vestfolds will yield sand and alluvial dust that is blown towards the sea.

Such an event occurred on the evening of 29 June. Six millimetres of precipitation in the form of snow had fallen on the 24th and 25th and had begun to be blown about as winds freshened late on the 25th. More snow fell on the 26th and blowing snow was also reported as winds varied between fresh and strong (but less than gale force-34 knots) throughout the day. Air temperatures were around -12°C with Dew Points around -16 until 0800LST* on the 27th. Through the day they rose to be around -6 and -8°C respectively by 2400LST. Mean wind speeds were sustained above gale force from 1700LST on the 27th, throughout the 28th and stayed above 50 knots from around 1900LST to 2200LST on the 29th with a maximum gust of 87 knots. Wind speed fell steadily to be predominantly below gale force by 2400LST on the 29th. During this latter period air temperature rose and dew point values fell to around -3 and -12°C respectively. The result on the morning of the 30th can be seen on the above photograph. The island visible offshore is three and a half kilometres from the shoreline at Davis and it can be clearly seen that sand and dust has reached it.

Such events are not uncommon at Davis. Though this one appears to have been one of the more substantial of recent years, Antarctic folklore says that vehicles have had paint stripped from their bonnets at Davis in the past. Standard procedure at Davis is to park vehicles rearwards to the prevailing winds. Meteorological observers need to ensure that equipment such as Campbell-Stokes sunshine recorders with their glass spheres are protected at these times, and Stevenson screens there have a shorter life than elsewhere due to their windward face having been regularly abraded by sand-bearing gales.

The “Brown Blizzards” of the Vestfold Hills may come as a surprise to many, as indeed will the very presence of these oases in Antarctica to some. They are yet another fascinating thread in the meteorological tapestry of Antarctica. 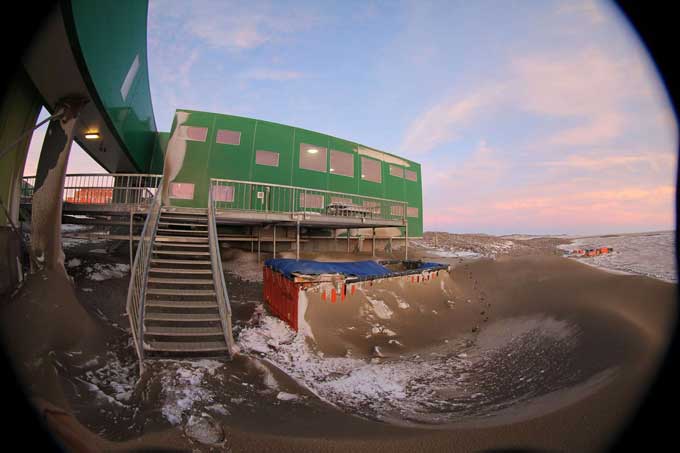 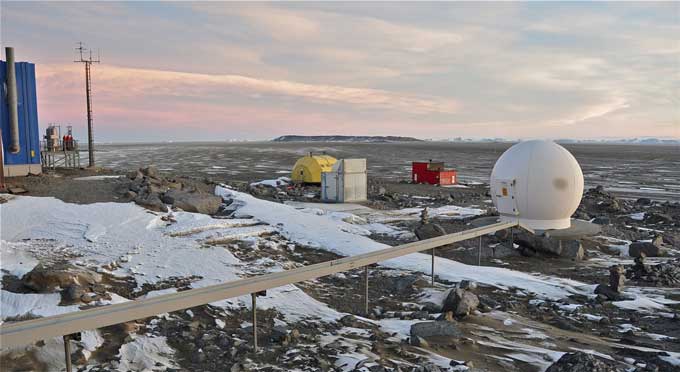