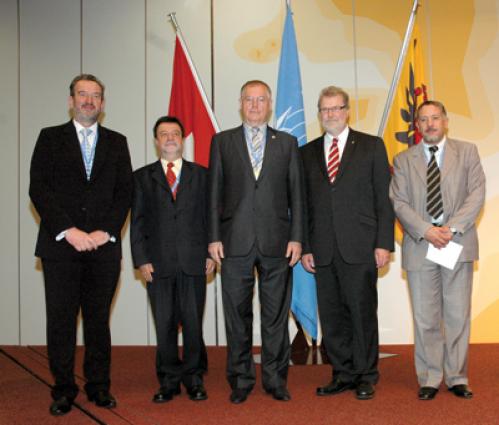 The World Meteorological Congress endorsed an ambitious global initiative that will help all communities, especially the most vulnerable, to cope with the impact of climate change, reduce natural disaster risks, and safeguard food production, water supplies and health.

The Global Framework for Climate Services will boost the availability of climate information needed by policy-makers and people to plan ahead and to take decisions that are sustainable in a changing climate. It will be a global undertaking involving a wide array of stakeholders.

The Congress decided on five priorities for WMO in the next four years:

“We need to make sure the links of our international cooperation are mutually strong, so that the results of our activities will be even greater,” explained President Dr Alexander Bedritskiy.

An extraordinary session of the World Meteorological Congress will be held in 2012, with relevant stakeholders, including UN bodies, to review terms of reference and of procedure rules of the Intergovernmental Board and to adopt a draft implementation plan for the Global Framework for Climate Services.

“As leaders of National Meteorological and Hydrological Services (NMHSs), we recognize the critical role WMO plays for humanity in the area of weather, climate and water in facilitating cooperation across borders and oceans, in building scientific leadership and in instilling a passion for excellence,” said Mr Grimes.

To capitalize on advances in research, numerical modelling, observing capabilities, and computer and communication technologies a new, integrated approach is needed to upgrade the WMO observing system.

The WMO Integrated Global Observing System will focus on a framework for observing systems that leads to better governance, improved management, integration and optimization of present observing systems. The aim is to lay the groundwork to make it operational by 2016.

WIGOS is an all-encompassing approach that will foster orderly evolution of the present set of systems into an integrated, comprehensive and coordinated system. WIGOS will satisfy, cost-effectively and sustainably, the evolving observing requirements of WMO Members, and enhance coordination with systems operated by partners.

Together with the WMO Information System (WIS), WIGOS will be the basis for accurate, reliable and timely weather, climate, water and related environmental observations and products by all Members and WMO Programmes, which will lead to improved service delivery.

A firm commitment of Members is key to WIGOS implementation. At its simplest, WIGOS is about implementing best practice in making and sharing observations; coordination and collaboration for efficiency and effectiveness; and delivering observations that meet user needs.

The team reviewed the latest observational data requirements of WMO Application Areas and discussed how identified gaps could be turned into recommendations to Members. The team also discussed how Global Cryosphere Watch and Global Framework for Climate Services requirements can be considered in this regard.

The new Implementation Plan will be submitted to the 15th session of the Commission for Basic Systems, which meets in 2012. The new implementation plan will provide Members with a blueprint for action, including clear, focused guidelines and recommended actions regarding the evolution of observing systems in a cost-effective and integrated way.

WMO outlined its support for least developed countries as they experience the impacts of an increasingly changing climate at the Fourth United Nations Conference on Least Developed Countries (LDCs), which took place in Istanbul, Turkey from 9 to 13 May 2011.

Extreme hydrometeorological events account for about 90 per cent of all natural disasters. During the last decades, an unprecedented number of extreme events, including floods and droughts, have set back development in the world’s poorest nations.

WMO Secretary-General Michel Jarraud outlined the weather and climate-related challenges facing LDCs. While weather and climate services have made outstanding progress during the last decades, most LDCs do not have the capacity to benefit from these advances, he told the conference.

WMO established in 2003 a special Programme for the LDCs to strengthen the capabilities of their National Meteorological and Hydrological Services to provide relevant and timely weather, water and climate information and services.

The Polar regions, including the ‘Third Pole’ (Himalayan and Tibetan Plateau) have an important impact on weather, water and climate worldwide. The cryosphere spans all latitudes in approximately 100 countries. It provides highly useful climate change indicators, yet is one of the Earth’s most under-sampled domains.

Congress agreed to set up an observational framework for Polar Regions, including an Antarctic Observing Network, as well as to develop a Global Integrated Polar Prediction System, to provide information on timescales from hours to centuries.

Noting the unparalleled demand for authoritative information on the the world’s snow and ice resources, Congress agreed to develop the Global Cryosphere Watch (GCW) in collaboration with international partners.

Building on the momentum of the International Polar Year 2007-2008, Congress agreed to work with other organizations to prepare a concept document for an International Polar Decade focused on delivering better scientific information for policy-makers.

WMO presented the 55th IMO prize, its most prestigious award, to Prof. Taroh Matsuno of Japan in a ceremony during the WMO Congress, for excellence in research in atmospheric dynamics, as well as climate research leadership which has significantly contributed to progress in climate change research. The IMO prize, granted annually, recognizes outstanding scientific research work in meteorology.

A team of French researchers received the 2011 Norbert Gerbier-MUMM International Award for drought reanalysis research at a ceremony during Congress. The reanalysis tool, now used by Météo-France, helped quantify that the drought in western Europe is the worst since 1958. The award encourages cooperation between meteorology and other sciences.

The 56th IMO prize has been awarded to the late Prof. Aksel Wiin-Nielsen as a lifetime achievement award, who served as WMO Secretary-General from 1980 to 1983. He co-founded and became the first Director of the European Centre for Medium-Range Weather Forecasts.

2011 WMO Research Award for Young Scientists has been conferred to Mr Rudi van der Ent from the Netherlands for research on atmospheric moisture over continents. Co-authors of the research paper were R. van der Ent, H.H.G. Savenije, B. Schaefli and S.C. Steele-Dunne.

Geoff Love, Director of the WMO Weather and Disaster Risk Reduction Department, shared these lessons in June at the IAEA Ministerial Conference:

The Environmental Emergency Response mechanism worked well. Dispersion charts provided decision makers with scientifically sound estimates of nuclear material dispersion in the atmosphere. This said, it is time to review products and procedures, based on experiences during this event and new developments in the science and technologies for these products.

Users of dispersion charts found the arbitrary concentration scale to be problematic. Adequate monitoring systems should be located around each nuclear power plant so that the source term is known accurately and quickly (so that an arbitrary scale is not needed), and there should be more coordination between the nuclear power industry and international agencies responsible for exchanging and using this information.

Standard procedures urgently need to be updated for assess hydrological and meteorological hazards, including climate change, for existing and proposed nuclear power stations.