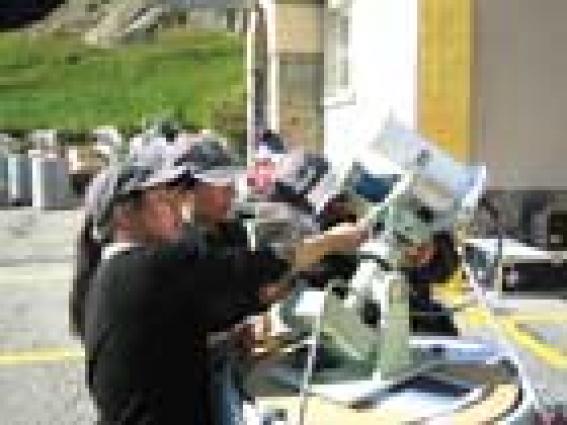 WMO Secretary-General Michel Jarraud and the Permanent Representative of Mexico, Mr Adrián Vázquez, signed an agreement at WMO headquarters on 25 February which contributes to the National Meteorological Service of Mexico. In Mexico, it was signed by Mr José Luis Luege, Director-General of the National Water Commission of Mexico.

The aim is to meet demand for high-quality weather and climate information products and services from public and private institutions. This is part of a 10-year Strategic Development Plan that the National Meteorological Service of Mexico began in 2010.

The meeting was held at the International Research Center on El Niño (CIIFEN). It was co-organized by WMO, CIIFEN and the Expert Team on Climate Change Detection and Indices (http://cccma.seos.uvic.ca/ETCCDI). The expert team includes the WMO Commission for Climatology, the World Climate Research Programme and the project on Climate Variability and Predictability, as well as the Joint Technical Commission for Oceanography and Marine Meteorology (of WMO and the Intergovernmental Oceanographic Commission of the United National Educational, Scientific and Cultural Organization).

The Sixth Technical Conference on Management of Meteorological Services in Regional Associations III and IV on WMO Integrated Global Observing System and the WMO Information System was held on 5-6 March in San José, Costa Rica. Directors of National Meteorological and Hydrological Services and Permanent Representatives from 30 countries attended. The meeting provided an excellent opportunity for participants to discuss issues of interest to both Regions III and IV as well as to identify priorities, needs and opportunities.

The Spanish-speaking Members of Region III (South America) and Region IV (North America, Central America and the Caribbean) plus Portugal and Spain form the Ibero-American Conference of Meteorological and Hydrological Services. They approved an action plan for joint cooperation, to be implemented through a WMO trust fund financed by the Government of Spain.

Some 40 communicators at National Meteorological and Hydrological Services from around the world exchanged experiences on issues ranging from crisis communications to social media at a WMO workshop hosted by Poland’s Institute of Meteorology and Water Management (IMGW) from 8-11 March.

IMGW Director-General Mieczyslaw Ostojski and WMO Secretary-General Michel Jarraud opened the March workshop in Krakow, underlining the importance of communications at a time of increasing demand for meteorological and climatic information as a consequence of the awareness of climate change and the impact of extreme events.

The workshop, held jointly with the Press Officers Workshop of EUMETSAT, brought together for the first time WMO Information and Public Affairs focal points from all regions (Africa; Asia; South America; North America, Central America and the Caribbean; South-West Pacific; and Europe).

“WMO Information and Public Affairs focal points at NMHSs have the key responsibility to contribute in bridging the potential communication gap with the media, which are usually the actors with the most powerful outreach to advise on the necessary response to natural hazards and climate change, so they need to convey their message effectively,” Mr Jarraud told the workshop.

Participants agreed to in­crease cooperation and exchange of information, especially during high-impact weather events. This engagement is important for timely and efficient communications within and among regions.

EUMETSAT expressed its interest in similar workshops with WMO in the future.
To see the presentations:public.me.com/plygawko

Iceland is the latest Member of the European Centre for Medium-Range Weather Forecasts (ECMWF), one of the world’s leading centres in numerical weather prediction.

Iceland is the first new Member State under the amended Convention. The original Convention restricted membership to the founding Member States, but was amended in June 2010.

ECMWF provides medium-range and seasonal forecasts of global weather conditions and ocean waves to meteorological offices of its 34 Member States.