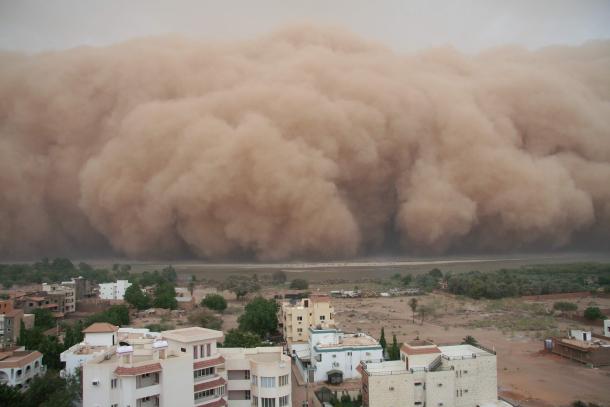 Sand and dust storms usually occur when strong winds lift large amounts of sand and dust from bare, dry soils into the atmosphere. Over the last decade, scientists have come to realize the impacts on climate, human health, the environment and many socio-econimic sectors. WMO Members are at the vanguard in evaluating these impacts and developing products to guide preparedness, adaptation and mitigation policies.

Sand and dust storms are common meteorological hazards in arid and semi-arid regions. They are usually caused by thunderstorms – or strong pressure gradients associated with cyclones – which increase wind speed over a wide area. These strong winds lift large amounts of sand and dust from bare, dry soils into the atmosphere, transporting them hundreds to thousands of kilometres away. Some 40% of aerosols in the troposphere (the lowest layer of Earth’s atmosphere) are dust particles from wind erosion. The main sources of these mineral dusts are the arid regions of Northern Africa, the Arabian Peninsula, Central Asia and China. Comparatively, Australia, America and South Africa make minor, but still important, contributions. Global estimates of dust emissions, mainly derived from simulation models, vary between one and three Gigatons per year.

Once released from the surface, dust particles are raised to higher levels of the troposphere by turbulent mixing and convective updrafts. They can then be transported by winds for lengths of time, depending on their size and meteorological conditions, before being pulled back down to the surface again. As larger particles sediment more quickly than smaller ones, there is a shift toward smaller particle sizes during transport. Dust is also washed out of the atmosphere by precipitation. The average lifetime of dust particles in the atmosphere ranges from a few hours for particles with a diameter larger than 10 μm, to more than 10 days for the sub-micrometric ones.

Interaction with weather and climate

Aerosols, particularly mineral dusts, impact weather as well as global and regional climate. Dust particles, especially if coated by pollution, act as condensation nuclei for warm cloud formation and as efficient ice nuclei agents for cold cloud generation. The ability of dust particles to serve as such depends on their size, shape and composition, which in turn depend on the nature of parent soils, emissions and transport processes. Modification of the microphysical composition of clouds changes their ability to absorb solar radiation, which indirectly affects the energy reaching the Earth’s surface. Dust particles also influence the growth of cloud droplets and ice crystals, thus affecting the amount and location of precipitation.

Airborne dust functions in a manner similar to the greenhouse effect: it absorbs and scatters solar radiation entering Earth’s atmosphere, reducing the amount reaching the surface, and absorbs long-wave radiation bouncing back up from the surface, re-emitting it in all directions. Again, the ability of dust particles to absorb solar radiation depends on their size, shape and mineralogical and chemical composition. The vertical distribution of dust in the air (vertical profile) and the characteristics of the underlying surface are also required to quantify this impact.

Airborne dust presents serious risks for human health. Dust particle size is a key determinant of potential hazard to human health. Particles larger than 10 μm are not breathable, thus can only damage external organs – mostly causing skin and eye irritations, conjunctivitis and enhanced susceptibility to ocular infection. Inhalable particles, those smaller than 10 μm, often get trapped in the nose, mouth and upper respiratory tract, thus can be associated with respiratory disorders such as asthma, tracheitis, pneumonia, allergic rhinitis and silicosis. However, finer particles may penetrate the lower respiratory tract and enter the bloodstream, where they can affect all internal organs and be responsible for cardiovascular disorders. A global model assessment in 2014 estimated that exposure to dust particles caused about 400 000 premature deaths by cardiopulmonary disease in the over 30 population.

Depending on weather and climate, dust can remain suspended in air for days, causing allergy outbreaks far from their source

Some infectious diseases can be transmitted by dust. Meningococcal meningitis, a bacterial infection of the thin tissue layer that surrounds the brain and spinal cord, can result in brain damage and, if untreated, death in 50% of cases. Outbreaks occur worldwide, yet the highest incidence is found in the “meningitis belt”, a part of sub-Saharan Africa with an estimated population of 300 million. These outbreaks have a strong seasonal pattern – many studies have linked environmental conditions, such as low humidity and dusty conditions, to the time and place of infections. Researchers believe that the inhalation of dust particles in hot dry weather may damage nose and throat mucosa creating favourable conditions for bacterial infection. Moreover, iron oxides embedded in dust particles may enhance the risk of infection.

Dust also plays a role in the transmission of valley fever – a potentially deadly disease – in the Southwest of the United States and in the Northern Mexico by acting as a transporter of Coccidioides fungi spores.

Impacts on the environment and society

Surface dust deposits are a source of micro-nutrients for both continental and maritime ecosystems. Saharan dust is thought to fertilize the Amazon rainforest, and dust transports of iron and phosphorus are know to benefit marine biomass production in parts of the oceans suffering from the shortage of such elements. But dust also has many negative impacts on agriculture, including reducing crop yields by burying seedlings, causing loss of plant tissue, reducing photosynthetic activity and increasing soil erosion.

Indirect dust deposit impacts include filling irrigation canals, covering transportation routes and affecting river and stream water quality. Reductions in visibility due to airborne dust also have an impact on air and land transport. Poor visibility conditions are a danger during aircraft landing and taking off – landings may be diverted and departures delayed. Dust can also scour aircraft surfaces and damage engines.

Dust can impact on the output of solar power plants, especially those that rely on direct solar radiation. Dust deposits on solar panels are a main concern of plants operators. Keeping the solar collectors dust-free to prevent particles from blocking incoming radiation requires time and labour. 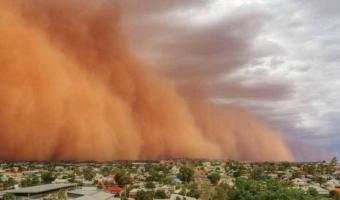