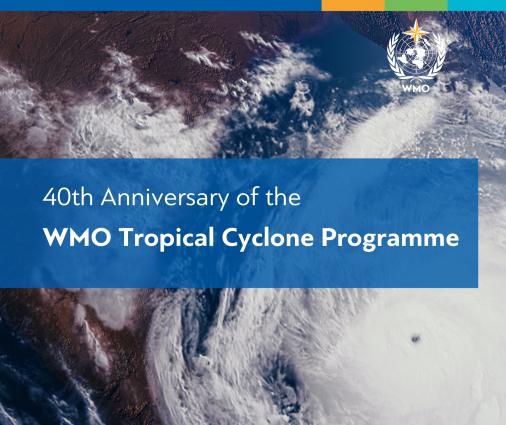 Tropical cyclones are one of the biggest threats to life and property even in the formative stages of their development. They include a number of different hazards that can individually cause significant impacts on life and property, such as storm surge, flooding, extreme winds, tornadoes and lighting. Combined, these hazards interact with one another and substantially increase the potential for loss of life and material damage.

A tropical cyclone is a rapid rotating storm originating over tropical oceans from where it draws the energy to develop. It has a low pressure centre and clouds spiraling towards the eyewall surrounding the "eye", the central part of the system where the weather is normally calm and free of clouds. Its diameter is typically around 200 to 500 km, but can reach 1000 km. A tropical cyclone brings very violent winds, torrential rain, high waves and, in some cases, very destructive storm surges and coastal flooding. The winds blow counterclockwise in the Northern Hemisphere and clockwise in the Southern Hemisphere. Tropical cyclones above a certain strength are given names in the interests of public safety.

Different terminology is used for this weather phenomenon depending on the location:

Depending on the maximum sustained wind speed, tropical cyclones will be designated as follows:

More information on the classification of tropical cyclones is available on the WMO Community Platform here.

Tropical cyclones and their related hazards

Tropical cyclones are associated with a variety of hazards. Damaging or destructive winds may reach speeds in excess of 300 km/h in the most intense systems. The combination of wind-driven waves and the low-pressure of a tropical cyclone can produce a coastal storm surge – a huge volume of water driven ashore at high speed and with immense force that can wash away structures in its path and cause significant damage to the coastal environment. Torrential rainfall results in flash-flooding, flooding, and potential landslides and mudslides.

Their potential for wreaking havoc caused by those associated hazards is exacerbated by the length and width of the areas they affect, their intensity, frequency of occurrence and the vulnerability of the impacted areas.

Meteorologists around the world use modern technology, such as satellites, weather radars and computers, to track tropical cyclones as they develop. Tropical cyclones may be difficult to forecast, as they can suddenly weaken or change their course. However, meteorologists use state-of-art technologies and develop modern techniques such as numerical weather prediction models to forecast how a tropical cyclone evolves, including its movement and change of intensity; when and where one will hit land and at what speed. Official warnings are then issued by the National Meteorological Services of the countries concerned.

About 85 tropical storms form annually over the warm tropical oceans of the globe. Among these, a little more than half (45) become tropical cyclone/hurricane/typhoon. The WMO Tropical Cyclone Programme provides information on these hazards and the WMO Severe Weather Information Centre provides real-time tropical cyclone advisories.

The WMO framework allows the timely and widespread dissemination of information about tropical cyclones. As a result of international cooperation and coordination, tropical cyclones are increasingly being monitored from their early stages of formation. The activities are coordinated at the global and regional levels by WMO through its Tropical Cyclone Programme. The Regional Specialized Meteorological Centres with the activity specialization in tropical cyclones, and Tropical Cyclone Warning Centres, all designated by WMO, are functioning within the Organization’s Tropical Cyclone Programme. Their role is to detect, monitor, track and forecast all tropical cyclones in their respective regions. The Centres provide, in real-time, advisory information and guidance to the National Meteorological and Hydrological Services.

Each year the impacts of tropical cyclones and other weather, climate and water extremes around the Earth give rise to multiple casualties and significant damage to property and infrastructure, with adverse economic consequences for communities that can persist for many years. All this happens in spite of the fact that many of these severe events have been well forecast, with accurate warning information disseminated in a timely fashion by the responsible National Meteorological and Hydrological Service (NMHS). The reasons for this apparent disconnect lie in the gap between forecasts and warnings of hydrometeorological events and an understanding of their potential impacts, both by the authorities responsible for civil protection/emergency management and by the population at large.

It is no longer enough to provide a good weather forecast or warning – people are now demanding information about what to do to ensure their safety and protect their property.

If this gap is to be closed, then an all-encompassing approach to observing, modelling and predicting severe hydrometeorological events, and the consequent cascade of hazards through to impacts, needs to be developed. Tackling this problem will require a multidisciplinary and highly integrated and focused endeavour. This is essential to ensure access to the best possible science, and the optimum services, to manage multi-hazard events today, and to provide the best possible evidence base on which to make the costly decisions on infrastructure needed to protect the population in the future as climate changes.

Improving the understanding of the potential impacts of severe hydrometeorological events poses a challenge to NMHSs and their partner agencies, particularly disaster reduction and civil protection agencies. Progressing from weather forecasts and warnings to multi-hazard impact-based forecast and warning services represents a paradigm shift in service delivery for many NMHSs.

Successful impact-based forecasting requires collaboration with others who have the additional necessary expertise, resources and knowledge (such as demographic data, crowd-sourcing techniques, geographical information systems (GISs), interoperability, and third-party data integration and usage) to deliver impact services that NMHSs cannot do on their own. From the perspective of service users, this would include communities most vulnerable to disasters contributing to the information system. Working closely together, the suppliers of the services and the beneficiaries of those services would provide an integrated, authoritative, unified voice that everyone could resonate with, and in turn could take effective action.

Some of the concepts that underpin the idea of impact forecasting go beyond the terms traditionally used in weather forecasting.

Hazard - A hazard is defined as a hydrometeorological-based, geophysical or human-induced element that poses a level of threat to life, property or the environment.

Exposure - Exposure refers to who and what may be affected in an area in which hazardous events may occur. If the population and economic resources were not located in (exposed to) potentially dangerous settings, no disaster risk would exist. Exposure is a necessary, but not sufficient, determinant of risk. It is possible to be exposed, but not vulnerable, for example, by living on a floodplain but having sufficient means to modify building structure and behaviour to mitigate potential loss. However, to be vulnerable to a hazard, it is also necessary to be exposed. Exposure is time (t) and space (x) dependent. An example of exposure related to geographic location would be a vehicle driving across a bridge during a windstorm. To highlight a situational example, a crane would have a much higher exposure during the same windstorm than would a car at street level. Exposure due to timing may exist at various timescales. For example, a windstorm that strikes during the peak of an urban rush hour would result in a much higher exposure factor than if it were to hit an unpopulated rural area in the middle of the night.

Vulnerability - Vulnerability refers to the susceptibility of exposed elements, such as human beings and their livelihoods and property, to suffer adverse effects when affected by a hazard. Vulnerability is related to predisposition, sensitivities, fragilities, weaknesses, deficiencies, or lack of capacities that favour adverse effects on the exposed elements. Vulnerability is situation specific, interacting with the hazard to generate risk. Therefore, vulnerability may also be time and space dependent. For example, as flood defences are built they protect the population in low-lying areas. As another example, the State of Florida in the United States implemented stricter building codes following Hurricane Andrew in 1992.

These three separate forecasting paradigms are defined for clarity. There is a subtlety in the distinctions amongst them.

For completeness, these Guidelines describe the ultimate step of forecasting actual impacts, although it is recognized that this is a highly sophisticated exercise, requiring strong collaboration with partner agencies and significant research into exposure and vulnerability. For many WMO Members this step will not be the responsibility of the NMHS but rather that of the relevant DRCPA and other partners. Consult the Guidelines here. 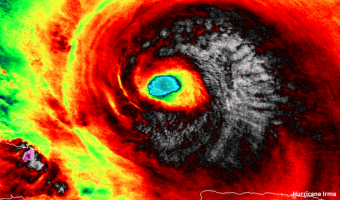 A quick glance at the notable recent tropical cyclones recorded below emphasizes the need for improved impact-based multi-hazard early warning systems, mitigation measures and working with those at risk to prepare them to take quick effective action to save lives. 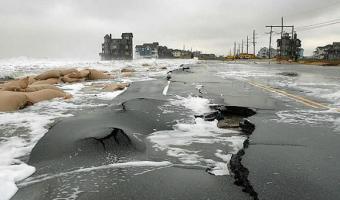 Along coastlines and kilometres inland, storm surge is one of the biggest threats to lives and property during hurricanes and storms. 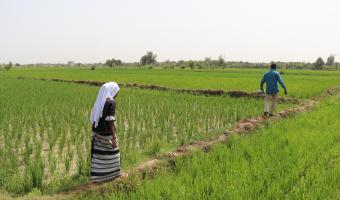 Early warning is a major element of disaster risk reduction. It can prevent loss of life and reduce the economic and material impacts of hazardous events including disasters. To be effective, early warning systems need to actively involve the people and communities at risk from a range of hazards, facilitate public education and awareness of risks, disseminate messages and warnings efficiently and ensure that there is a constant state of preparedness and that early action is enabled. 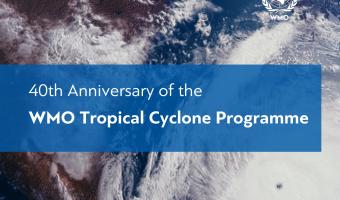 Tropical Cyclone Bhola, which hit present-day Bangladesh on 12/13 November, remains the deadliest tropical cyclone on record. It caused the death of between 300 000 and 500 000 people. The tragedy prompted international action and laid the foundation for the WMO Tropical Cyclone Programme, which marks its 40 anniversary in 2020.

Assisting Members in monitoring and forecasting tropical cyclones to reduce disaster-related losses of life and infrastructure.

Enhancing the contributions of National Meteorological and Hydrological Services (NMHSs) to disaster risk reduction (DRR) at all levels in a more cooperative, cost-effective, systematic and sustainable manner....

The GDPFS is an international mechanism that coordinates Member capacities to prepare and make meteorological analyses and forecast products available to all Members. It enables delivery of harmonized...