How the ocean shapes weather and climate 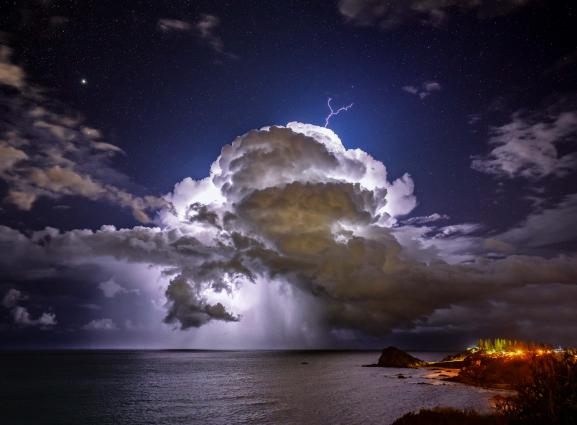 How the ocean shapes weather and climate

The ocean’s tight linkage with the atmosphere makes understanding its behaviour vital for forecasting weather and climate conditions.

The ocean’s tight linkage with the atmosphere makes understanding its behaviour vital for forecasting weather and climate conditions. The ocean absorbs most of the solar energy reaching the Earth. As the Equator receives much more solar energy than do the Poles, enormous horizontal and vertical ocean currents form and circulate this heat around the planet. Some of these currents carry heat for thousands of kilometres before releasing much of it back into the atmosphere.

The ocean warms and cools more slowly than the atmosphere, thus coastal weather tends to be more moderate than continental weather, with fewer hot and cold extremes. Evaporation from the ocean, especially in the tropics, creates most rain clouds, influencing the location of wet and dry zones on land. The enormous amount of energy captured by the ocean creates the world’s most powerful and destructive storms and extreme events such as cyclones (including tropical and extra-tropical).

Over 90% of the extra heat trapped to the Earth by humanity’s carbon emissions is stored in the ocean – only about 2.3% warms the atmosphere, while the rest melts snow and ice and warms the land. As a result, the atmosphere is warming less quickly than it otherwise would. This should not lull us into inaction, however, as ocean warming only delays the full impact of climate change. Excess heat contributes to sea level rise due to thermal expansion, anoxic (without oxygen) ocean areas, melting of sea ice, marine heatwaves, coral bleaching and other inhospitable environments for marine life. Inexorably, much of the ocean’s newly absorbed heat will flow out into the atmosphere over the coming centuries.