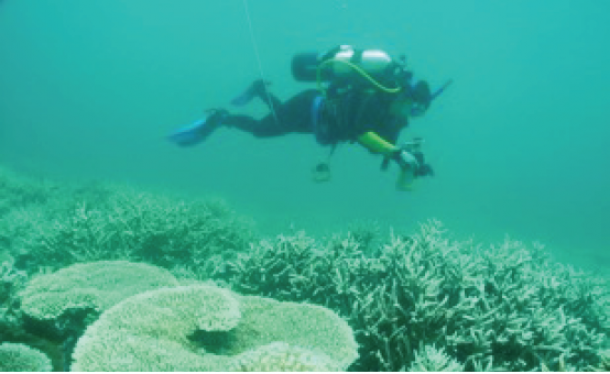 Ocean temperature extremes, such as marine heatwaves, can have a major impact on marine ecosystem health and the productivity of fisheries and aquaculture.

The oceans around Australia have warmed substantially since 1910, when compared to average ocean temperatures for 1961–1990. Warming is particularly pronounced in south-east and south-west waters – across the Pacific and Indian Oceans. Climate projections indicate that this warming trend is set to continue in coming decades, together with an increase in frequency, duration and intensity of marine heatwaves. What will this mean for marine habitats?

Marine heatwaves are typically defined as a period of five or more days in which ocean temperatures are above the 90th percentile, that is in the top 10%, of recorded figures for that region at that time of year. These severe ocean events have increased in frequency, duration and intensity over the past 100 years, with impacts on species and habitats reported around the world. These extremes offer a view of ocean conditions that may be the usual in the future.

Forecasts for marine industries and managers

Warmer oceans can have significant impacts on marine ecosystems such as mass coral bleaching, increasing disease risks for coral and fish, and changing the growth rates, distribution and migration patterns of fish. Extreme events such as marine heatwaves, combined with a warming baseline, have the potential to seriously impact marine ecosystems and the fishery industry in the coming decades.

How can marine managers better cope with these extreme ocean heat events and their impacts?

Advance warning of an impending marine heatwave can provide an early window for the implementation of management strategies to minimize impacts. The Australian Bureau of Meteorology (BOM) produces operational seasonal forecasts of sea surface temperature (SST) and thermal stress up to six months into the future for Australian waters (www.bom.gov.au/oceanography/oceantemp/sst-outlook-map.shtml). BOM, in collaboration with the Australian Commonwealth Scientific and Industrial Research Organisation (CSIRO), has worked together with many marine industries and agencies around the country to develop useful forecast products to help stakeholders manage their climate risk.

Seasonal forecasts of ocean temperature several months into the future can support operational decision-making, and help inform questions such as:

Forecast usefulness depends on the management decision timeline and the critical environmental period affecting the decision, together with forecast accuracy at that time. BOM and CSIRO have spent over 10 years working together with marine stakeholders to improve forecast delivery and use. They have developed seasonal forecast tools in Australia that are used by coral reef managers, fishers and fishery management authorities, and aquaculture businesses.

The Great Barrier Reef Marine Park Authority has been using BOM's seasonal ocean temperature forecast tools since 2009 to help support the management of the Reef. Seasonal ocean temperature forecasts indicate how much warmer or cooler than usual surface oceans are around the Reef over the coming six months. Accumulated thermal stress forecasts also predict how long temperatures will exceed the normal summer temperatures. High ocean temperatures are the primary cause of mass coral bleaching, a stress response of corals whereby they expel their tiny symbiotic algae (zooxanthellae), exposing their white skeleton. Mass coral bleaching events occurred on the Reef in 1998, 2002, 2016, 2017 and 2020.

The Great Barrier Reef is larger than Italy and presents a huge management task. Reef managers use forecast information to determine the risk of mass bleaching occurring in the coming summer. Managers can then target regions of the Reef and relocate resources for monitoring of bleaching. It is important to understand how bleaching events evolve over time and advance warning of conditions that promote bleaching allows surveys to occur before, during and after an event to gauge the full impact on Reef health. Forecasts are also used to brief the government, tourist operators and the general public.

These forecasts will provide information regarding location, severity, duration and likelihood of future marine heatwaves, all important considerations for proactive operational responses and management of the impacts of these extreme events.

Looking to the future

Warming ocean temperatures due to climate change are likely to increase both the frequency and severity of heat related impacts on marine resources in the future. Skillful prediction of these extreme ocean events can assist governments, industries and communities to respond and adapt to the growing impact of marine heatwaves in a changing climate.