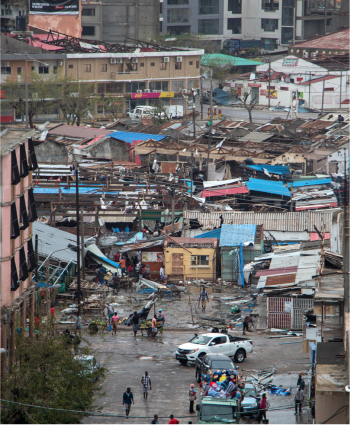 Tropical Cyclone Idai was the costliest and deadliest storm on record for the South Indian Ocean basin and one of the most destructive tropical cyclones on record in Africa and the southern hemisphere.

Tropical Cyclone Idai was the costliest and deadliest storm on record for the South Indian Ocean basin and one of the most destructive tropical cyclones on record in Africa and the southern hemisphere. The long-lived cyclone made landfall in Beira, Mozambique, on 14 March 2019 (Figure 1). Its heavy rains and strong winds caused flash flooding and massive destruction of property and crops, bringing the region into a humanitarian crisis (Figure 2). The cyclone was monitored 24 hours-a-day. Its track and intensity were forecast and timely early warnings were disseminated. However, the Post-Disaster Needs Assessment (PDNA) in Mozambique1 estimated that 1 600 people were injured and approximately 1.8 million people were affected. Furthermore, the PDNA estimated total damages at US$ 1.4 billion and the cost of recovery and reconstruction at US$ 2.9 billion. As is the practice with early warning systems (EWS), there was a need for review to analyse where improvements could be made.

Thus, in May 2019, WMO carried out an After Action Review (AAR) on the operation of the EWS to learn the lessons from Idai in preparation for the next extreme event that might put lives at risk. The AAR specifically covered the requirements and capabilities of the National Meteorological and Hydrological Service (NMHS) and their coordination with the National Disaster Management authority for an end-to-end Multi- Hazard Early Warning System (MHEWS) in the context of disaster risk management. The Idai AAR serves as a good exemplar of AAR practice and helps us to understand their value in identifying structural and capacity gaps, for learning from experience, for improving partnerships and for pinpointing financial requirements.

After Action Review for weather-related event

In a manner of speaking, conducting an AAR is an exercise for the next pending disaster. Getting agencies, partners, stakeholders and end users together during the AAR provides a forum for discussing actions (or inaction) taken, the reception of warnings, the application of local knowledge and the population’s trust in the authority issuing the warnings.

An AAR analyses the specific objectives and scopes of operation of all involved in emergency services and the actions taken in response to the emergency to identify best practices, gaps, lessons learned and areas for improvement. It offers a cross-sector approach for stakeholders to reflect on their experiences and perceptions of the response, in order to systematically and collectively review and assess what worked and what did not, why and how to improve. The benefits are multiple. For those involved in a cross-sector approach to emergency events, there are three main benefits:

AAR objectives for extreme weather events can be defined along the four pillars described in the publication Multi-Hazard Early Warning Systems: A Checklist:

An overarching element is the assessment of national institutional arrangements. Evolving national disaster risk reduction (DRR) policies, legislation and legal frameworks provide opportunities for a greater recognition of the NMHS by government and stakeholders, leading to strengthened partnerships and increased resources and opportunities for providing products and services.

AARs provide rich value in meetings with partners, stakeholders and local communities. In Mozambique, the WMO mission met with a whole range of partners at the regional and national level, from forecast and warning providers to decision-makers and end-users, as well as with international donors and banks.

Interaction with vulnerable communities – in this case disaster survivors – builds trust, understanding and knowledge. The AAR may even reveal previously unknown resources that can help local communities prepare, respond and recover. AARs increase knowledge of local conditions and may discover new monitoring capabilities, such as citizen scientists that are trusted observers in the region. Citizen scientists, also known as weather spotters/river monitors, can communicate with NMHSs to provide information on actual real-time conditions and, thus, enhance the detection, verification and early response functions of early warning systems.

These interactions with local communities build trust: there is nothing more rewarding than when a connection to people occurs. These connections may lead to a better understanding of how those in harm’s way receive and respond to impact-based warnings. Government entities can thus learn what is needed for the local community to respond appropriately. They can better understand possible local impacts and tailor their warnings to the community. Community reactions during Idai were slow as the areas affected had not experienced cyclonic activity since 2000 and Idai’s magnitude was far greater than that of any previous event.

Furthermore, interconnections with stakeholders in national and provincial organizations for disaster management, humanitarian networks and the like allows for better, more effective and timely responses and aid for the vulnerable. The goal is to improve the methodology for collecting data on the people and places that could potentially be affected by an extreme weather event such as a tropical cyclone. The Annual Contingency Plan, an official document of the Government of Mozambique that serves as the basis for the process of coordination, response and management of extreme events, estimated that 136 382 people could be affected by an extreme weather event. Mozambique’s PDNA and the WMO AAR showed that the number had been underestimated by a ratio of nearly 1:10: the annual report on implementation of the contingency plan reported that in just four provinces – Sofala, Zambezia, Manica and Tete – 1 459 941 people were affected.

An AAR can provide a collective vision for improving services and mitigating future disaster risks if the lessons learned are incorporated into standard operating procedures (SOP) and practice. SOPs and practice (exercises) must be inclusive in order to have the most profound results. Leaving out a partner, stakeholder and/or end user group may leave a kink in the armour and improper response during future pending disasters.

Tropical Cyclone Idai, was continuously monitored: the AAR states that “track forecast uncertainty had reduced and was well below usual standards, clearly indicating that Idai would hit the Beira area.” However, the AAR team discovered several kinks in the armour with respect to timely dissemination, reception and understanding the proper response. An inclusive application of the suggestions from the report, especially since relationships have been forged with the communities affected by Tropical Cyclone Idai, will strengthen the resolve of the people to respond properly to the timely, impact-based warnings provided by the authorities.

Most weather-related AARs consistently pinpoint two areas for immediate action: communication/ collaboration and the identification of funding for improvements. Both can be integrated into SOPs and exercises, and generally apply to government entities, partners and end-users.

Follow-up actions – the value of partnerships

Through collaboration with stakeholders, the ARR creates consensus around actions to be implemented immediately, in the medium- and long-term to mitigate the impacts of and improve responses during the next extreme event. The collaboration creates a sense of ownership that helps ensure that actions are taken – some actions can only be fully implemented if there is a close and trusting relationship between partners.

Post weather-related event AARs usually highlight the requirement for partnership to enhance the capacities in “impact-based forecast and warning services (IBFWS)”, that is forecasting, assessing associated risks, disseminating warnings and messaging. Typically, those actions require a strong collaboration with disaster response and civil protection agencies to be moved forward. These partnerships can be built on the aforementioned SOPs that define clear roles and coordination mechanisms and, as important, on regular exercises. Partnership can also be developed with academia in order to provide the necessary basic technical and scientific requirements for weather forecasters. By twinning with a more advanced NMHSs, training can also be provided on the operational use of tools, guidance and products.

In the post Idai AAR follow-up actions and associated budget for the National Institute of Meteorology (INAM) and the National Directorate of Hydrological Resources Management (DNGRH) were characterized according to the scope initially identified for assessing the capacities for end-to-end MHEWSs as shown in Fgure 7.

The post Idai AAR team determined that US$ 27 million would be required to address the Earth system observation gaps and the capacity deficiencies identified. This would provide education, training, upgraded equipment and systems, additional detection systems, planning and robust infrastructure for housing government authorities. The WMO report speaks to the need to prepare for and respond appropriately to the projected impacts from natural hazard to mitigate disaster risks.

When a government decides to conduct an AAR, financial capability must be one of the first considerations. Many countries are able to finance AARs and to ensure that their recommendations are acted upon as part of recovery plans and ongoing national planning processes. This is particularly true in countries where the systematic initiation of AARs is recognized as a requirement in National Meteorological and Hydrological Plans and related operational procedures. In a certain number of developing countries, the financial assistance of development partners will be required to assist with conducting the AAR – even more so when international experts are needed to conduct the AAR.

The second consideration is the improvement of financial preparedness for disasters, which requires increasing the availability, predictability and efficiency of ex-ante resources for disaster preparedness and response.

Third is assuring that follow-up actions are budgeted, as shown in Figure 7, and a business plan developed, which can be leveraged for financial support from government or donors. The business plan allows donors to understand the needs and what the funds will be used for. A common approach inclusive of other government entities to provide a comprehensive proposal is appreciated by donors as it helps to ensure that there is no overlap in funding.

A joint proposal aimed at “Establishing an Integrated Hydro-Meteorological Early Warning System to Strengthen Climate Resilience in Mozambique” was submitted through the National Designated Authority to the Green Climate Fund (GCF) by INAM, DNGRH and Eduardo Mondlane University (UEM) following Idai. It highlights the vulnerability of the country to climate events, the current economic stress and the lack of effective MHEWS. It acknowledges the support provided by donors in case of emergency, stressing that those funds are mostly activated for response and rarely for preparedness. Therefore, the GCF funding is requested to support the establishment and improved MHEWS, which will allow for proper planning and disaster risk management, thus reducing public expenditure and increasing both institutional and human capacity.

AARs are just one of the important steps in the cycle of continuous improvement for MHEWSs. A common thread running through all of the steps is preparation and collaboration. The more inclusive and far-reaching the preparation, the greater the opportunities for success. AARs provide a glimpse into the preparation aspect of successful MHEWSs and can aid in strengthening relationships and SOPs. Tying the improvements to finance is vital in order to ensure recommendations are instituted. And, by all means apply the KISS method: Keep It Simple for Success.

1 Led by the Government with the support of a global partnership that included the World Bank, the United Nations System and the European Union

WHO, 2019:The global practice of after action review: a systematic review of literature. Geneva.

US National Oceanic and Atmospheric Administration (NOAA), 2019: Reporting on the State of the Climate in 2019.