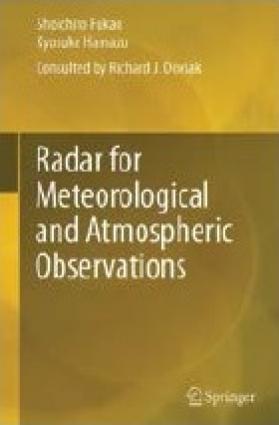 The use of radar has greatly improved our ability to interpret weather phenomena and understand atmospheric dynamics. It has also facilitated new observations and an enhanced appreciation of our environment. The authors of Radar for Meteorological and Atmospheric Observations – academician Shoichiro Fukao and industry expert Kyosuke Hamazu – have collaborated on the development of various types of weather and atmospheric radars, ranging from middle and upper atmosphere radar to boundary layer radar. Their routine exchanges with colleagues convinced them that knowledge of weather and atmospheric radars could be improved if they were described comprehensively and systematically in one volume using common approaches. Thus, the initial discussion in Radar for Meteorological and Atmospheric Observations focuses on identifying an appropriate approach to distinguish between the atmospheric updraft and fall velocity of precipitation particles in the Doppler spectrum using middle and upper atmosphere radar, where an understanding of both weather and the dynamics of the atmosphere are required. Based on their experience in developing various types of radar and performing a variety of weather and atmospheric observations, the authors conclude that the scientific and technical bases for atmospheric radar observations could be treated in the same manner.

This first half of the book concentrates on the theoretical aspects of weather and atmospheric radar, while the second half describes actual systems as well as observations made using such systems. In first half, the chapter on the reception and processing of signals is precise and comprehensible, and contains original figures and descriptions. In the second half, a variety of radar systems and observational results are introduced, accompanied by numerous photos and figures, to assist the reader’s understanding. Dr. Richard J. Doviak, who reviewed and edited the book, noted that "the authors have done a remarkable job of combining the results of research in weather and atmospheric radars to provide readers with a comprehensive overview of the outstanding observations that have been made with radar used as a remote sensor of weather and atmospheric phenomena."

The descriptions of the technical and operational background to radar observations contained in this book will serve as a useful reference for all readers working in radar-related fields, though descriptions of spaceborne radar are limited. The book is aimed at scientists, engineers, students and others interested in meteorology and atmospheric science. It will also be useful to weather forecasters and river administrators who are engaged in radar observations and monitoring. It may also serve to promote collaboration among meteorologists, hydrologists and engineers with the aim of developing a common approach to radar observations of weather and other atmospheric phenomena, particularly in light of recent public demands for such collaboration following issues associated with destructive rainfall events.