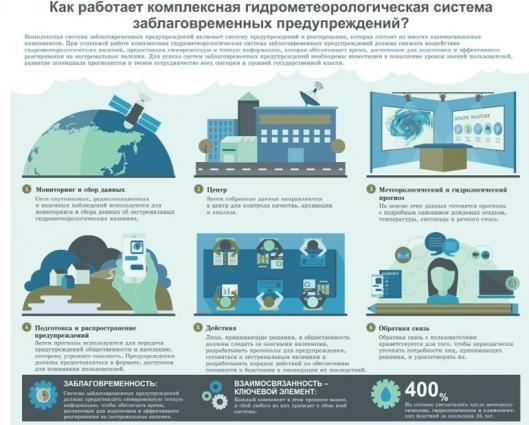 Hydrometeorological extremes account for more than 90% of all disasters caused by natural hazards recorded between 1994-2013.1 Floods, storms, droughts and extreme temperatures alone affected more than 3 billion people, claimed about 600 000 lives and caused about US$ 2 trillion in direct economic damages during the same period. According to Global Facility for Disaster Reduction (GFDR) of the World Bank, economic assessment of meteorological and hydrological services indicates that as many as 23 000 lives could be saved and up to US$ 65 billion in economic benefits could be realized if National Meteorological and Hydrological Services (NMHSs) were strengthened to produce better forecast, information and warning services.

Establishing and sustaining operational Early Warning Systems (EWSs) remain a challenge, despite the concerted and ongoing efforts of many partners and NMHSs to modernize delivery of hydrometeorological services. This article highlights some of the lessons learned from implementing and sustaining these projects. Results indicate that changes in project strategy are needed to increase the likelihood of sustainable delivery of services, along with capacity building of NMHSs, local commitments and strong partnership with users and private sector.

The United States Agency for International Development (USAID) Office of Foreign U.S. Disaster Assistance (OFDA) in partnership with the National Oceanic and Atmospheric Administration (NOAA) and the University of Colorado supported a research project to look into the hydrometeorological projects to understand if learning is taking place, and if not, why, and how to overcome some of the obstacles to improve sustainability of activities. Although lessons learned were identified in most of the projects, they were not completely learned and incorporated into the future projects.

Lessons learned from implementation of these projects demonstrated that building weather, water and climate early warning services are not only about equipment. They also highlight the need to strengthen other elements of an end-to-end EWS and to ensure linkages among them in order to deliver the best available information to enable affected population and users to take action.

An end-to-end system consists of many interconnected components:

Failure of any one of these basic components or of the link between them will lead to reduced effectiveness if not the complete failure of the system. Interconnectivity is an essential attribute of a successful warning system as well as investment into delivering services. Therefore, when an NMHS is being strengthened, it is critical that attention be placed on assuring that these components are functioning, maintained and continually tested to guarantee their successful operation and integration. Feedback is important to address failures and gaps for effective end-to-end systems.

Many NMHSs can only acquire sufficient funding to modernize their services after a major hydrometeorological-related disaster hits their country or neighbouring countries. Disasters usually get media, political and public attention, which can lead to a rapid infusion of funding for modernization efforts. However, a modernization strategy must first identify gaps in the end-to-end system, then formulate a way forward to build an operational forecasting programme that meets user-demands. That can be a tall order in the usually short time period afforded by a donor or government funding cycle.

It is evident that many organizations need to participate in developing an end-to-end EWS process, including representatives from all levels of government, communities and other stakeholders. However, due to time limitation, coordination with and participation of all the above is difficult. Often, many donors are implementing different components of the end-to-end system, installing technologies and systems that may not link well. The result is a fragmented EWS that cannot be operated or maintained with the limited human and financial resources available when the donors leave. In addition, many NMHSs have difficulty competing for scarce national resources as the disaster gets father away in time and media attention diminishes, thus, they have limited budgets to maintain operational systems.

From 1992 to 2008, NOAA participated in many hydrometeorological projects around the world. Many were launched after a major disaster. Lessons learned revealed significant barriers to sustainability:

In addition, building capacity to operate new systems in a short period of time is a challenge made more difficult as staff continue their normal duties so there is a lack of commitment or support for the new system(s).

It is difficult for governments to absorb the total financial burden of maintaining and operating new hydrometeorological systems. In addition, most finance ministers lack awareness of the value of services provided by NMHSs in saving lives, livelihoods and infrastructure and in building economies. Thus, limited funding is provided to NMHSs. Public-private partnership can be an important element in the sustainability of hydrometeorological projects, mobilizing resources for operational activities.

Another lesson learned includes the need for a champion – a technical forecaster or agent that understands the value of the system, is committed to the strategy and the needed care and support of the system and staff to continuous delivery of services. This person should also champion the role of the private sector in the sustainability of hydrometeorological projects.

In 1998, Hurricane Mitch devastated Central America. About one metre of torrential rainfall caused catastrophic flooding and mudslides, killing over 20 000 people and setting-back development prospects 10 to 20 years in some countries. Following the event, the US Central American Rehabilitation project aimed to establish an end-to-end flood forecasting and warning system for rivers at high risk of flooding in El Salvador, Guatemala and Honduras. The project would strengthen weak components of the end-to-end system meteorological and hydrological observation network and establish a real-time communication system. The NOAA National Weather Service River Forecast System (NWSRFS) for main-stem river flooding and the Automated Local Evaluation in Real Time (ALERT) systems would be installed for selected high potential flash flood river basins.

A specific sub-project under this initiative was to build a regional flood forecasting system for the Rio Lempe River. Stream and rain gauges were set up throughout the basin. In order to promote sustainability, a public-private partnership was established between the NHMS of El Salvador and its energy company (CEL). The system, established in 2001, is still operational today. This project revealed the importance of public-private partnerships and of having a technical champion to assure proper system maintenance and operation.

WMO and the Afghanistan Meteorological Department (AMD) worked closely to develop a strategy to build institutional capacity to produce severe weather forecasts and early warning services. Activities started a few years later: AMD infrastructure was enhanced to access and exchange data and products through the GTS by installing local and wide area networks, back-up power sources and security systems, updating IT equipment and rehabilitating the building with a new forecasting room. In 2016, 21 AMD staff received quality management and observer training, which was customized to the level of each forecasters to prepare them for reporting surface synoptic observations on the GTS. Through these efforts, Afghanistan’s data was made accessible to the international community in 2017 for the first time in 30 years.

The project also focused on long-term sustainability. Local champions were identified, including the director of AMD and forecasters. They were motivated to move forward following the roadmap developed at the beginning of the project, which provided a systematic and integrated process for modernization. Partnerships with NMHSs in the region, especially the Turkish State Meteorological service, enabled AMD to have continuous mentoring and operational training during the project. Female weather forecasters, knowledgeable about hydrometeorology and passionate about making a difference, were excited about the possibilities opened up by this project. AMD also received requested funding from the Ministry to continue to hire and train additional forecasters and observers to support these efforts.

A week after a meteorological satellite data reception, visualization and processing station was installed in the country through the project, AMD issued its first flood warning. The extensive capacity and infrastructure building undertaken made this milestone possible.

Learn from our successes

Last year’s hurricanes, floods, droughts and other hydrometeorological extremes show that vulnerability is increasing. Lessons learned from past projects demonstrate that there are common factors that contribute to the failure of hydrometeorological and forecasting modernization initiatives. Conversely, successful projects illustrate that effective warning systems can reduce losses and can be maintained for a number of years. The lessons learned need to be communicated in order to avoid same mistakes over and over again:

By demonstrating their value through services, NMHS increase their public and political visibility, which is necessary to mobilize funding for sustained service delivery. All stakeholders should be brought on board early in the project to assure the end-to-end system functions properly and sustainably. Capacity building is essential to ensure that NMHS staff masters the operational use of new systems and are able to identify operational failures.

There is an urgent and timely need to change the way that projects are implemented in developing countries. Donors and their partners need to learn lessons from the past.