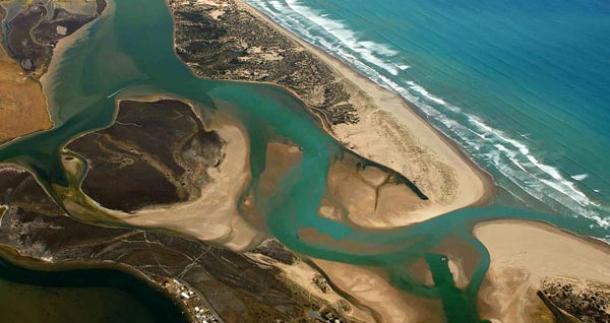 Fresh water is important for human life, economic activity, ecosystem health and geophysical processes. Over the first decade of the twenty-first century, Australia weathered marked extremes, experiencing its warmest period, with 2013 marked as its warmest year since national records began in 1910. Hydrological conditions in Australia are among the most variable on Earth. Its streamflow regime can go through prolonged periods of droughts such as the “Millennium drought” that occurred between 1997 and 2000 across most parts of eastern Australia. This variability has a profound impact on the management of water resources in Australia, and more specifically on the management of risks related to water supply for urban, irrigation and environmental needs.

The Murray-Darling Basin is the nation’s food basket. It extends over about 10º of latitude from central Queensland to South Australia, covering over 1 million square kilometres – 14% of Australia’s land area. It directly supports about 2 million people within the basin and is the major source of water to 1.1 million people living in Adelaide, the capital of South Australia, located outside of the basin. Over 90% of the area of the Basin is under some form of agricultural management, mainly grazing (86%). It constitutes about 75% of Australia’s irrigated land and contributes a significant proportion of the national income from agricultural production. Average runoff from the Basin is about 23 850 gigalitres (Gl)/year while average water use is about 12 900 Gl/year. Inflows into the Basin during the water year 2002/2003 were very low. It was the fifth driest period on record and was followed by three years – through to 2006 – that yielded below-average inflows. At the start of the water year 2006/2007, inflows were at record lows. 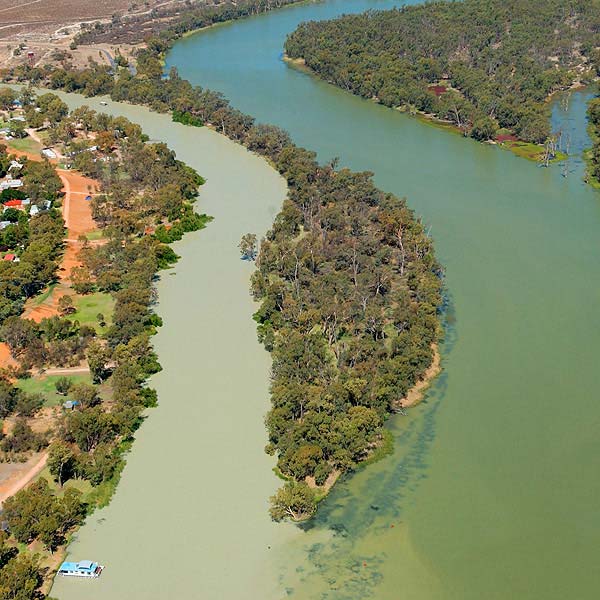 The Murray and Darling rivers are two of the major watercourses in the Murray-–Darling Basin. The two rivers meet at Wentworth, NSW. / © Murray-Darling Basin Authority

On 25 January 2007, following this prolonged period of severe drought and facing rapidly diminishing water supplies, the Australian Prime Minister issued A National Plan for Water Security. The 10-point plan is a commitment to improving the quality and coverage of Australia’s water information, and includes delivery of water-availability forecasts through the Extended Hydrological Prediction (EHP) services of the Australian Bureau of Meteorology.

Under extreme dry conditions, water managers in both rural and urban sectors face a number of challenging questions on how best to augment water supplies, which often involve significant capital investments and operational costs, and on how best to share limited and invaluable water supplies. Is a desalination plant needed and/or a new dam? Or should existing dams be augmented and, if so, to what size?

At the operational end, water managers need to optimize available water resources and as best as possible devise ways to meet demand pressures from urban, rural and environmental sectors. Water demand across large river basins varies in space and time, and water managers need to make decisions at a range of time scales – days, weeks, months and up to a few years, depending on the broad envelope of wet and dry cycles within different hydro-climatic regions. To address long-term water security, decision-makers need to deal with significant uncertainty about future climate and demand from different economic sectors. The science of climate change, in particular, is such that the accuracy of model predictions is limited by fundamental, irreducible uncertainties. It would, therefore, be unwise to rely purely on water availability projections made on the basis of climate models and prudent to favour solutions across a range of possible climate futures within some form of a robust risk assessment framework. Under extreme dry conditions, water managers in both rural and urban sectors face a number of challenging questions on how best to augment water supplies, which often involve significant capital investments and operational costs, and on how best to share limited and invaluable water supplies. Is a desalination plant needed and/or a new dam? Or should existing dams be augmented and, if so, to what size? 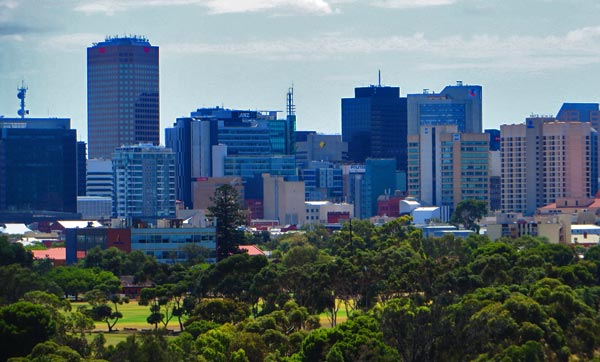 The Murray-Darling Basin directly supports about 2 million people within the basin and is the major source of water to 1.1 million people living in Adelaide (pictured), the capital of South Australia, located outside of the basin./© Ryan Smith

Prognosis of water availability at the time scale of days to weeks to seasons, whilst not easy, is a more tractable problem, at least in areas where there are demonstrable skills in climate predictions. At weeks to seasonal time scales, some of the questions faced by water managers concern:

Water managers are generally very experienced and invariably risk averse. They use innovative engineering methods to address issues relating to current water availability (through water accounts) and water demand. Robust methods also permit them to estimate evaporation and transmission losses. The key unknowns, which remain a challenge for the water managers, are the last two listed above, that is, likely inflow and how best to use probabilistic forecasts for operational planning. These types of issues can be addressed through the EHP Services of the Australian Bureau of Meteorology. 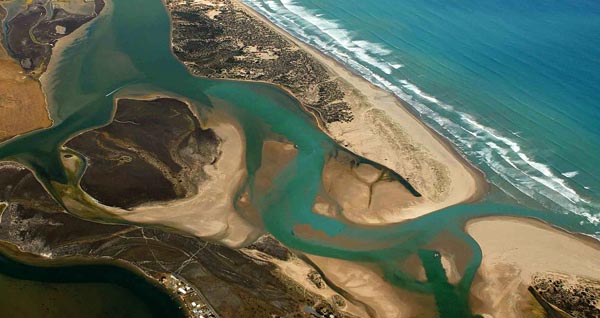 The mouth of the Murray is the only passageway to the ocean for the water that falls in the Basin. The journey to the sea is so long, hot, flat and windy, that only 4% of the rainfall in the Basin will ever find its way to the sea; the rest is diverted en-route for irrigation and agriculture, or evaporated by the sun. / © Murray-Darling Basin Authority

A Seasonal Streamflow Forecasting Service has been needed in Australia for many years, and the Australian Government’s recent investment in water information is addressing this need. Skilful and reliable seasonal forecasts of streamflows are highly valuable for providing water allocation outlooks, informing water markets, planning and managing water use and managing drought.

Seasonal forecasts of water availability can be made using dynamical, statistical or hybrid modelling approaches (as shown above). The statistical approach is based upon direct relationships derived from observed data and from predictor indices. Many climate indicators based on atmospheric pressure and sea surface temperature (SST) anomalies have been linked to future seasonal rainfalls. Such relationships have been exploited to forecast streamflow several months or seasons ahead. The Bureau launched a new Seasonal Streamflow Forecasting (SSF) service in December 2010 using the statistical approach. The service delivers probabilistic forecasts of streamflow volumes for the next three months at a site or total inflows into major water supply storages.

In contrast, the dynamical approach for seasonal water forecasting is to run dynamical climate models to produce forecasts of rainfall and other climate variables, which are then fed into hydrological models to produce streamflow forecasts. The term “dynamical climate forecast” is used to refer to the application of coupled oceanic and atmospheric general circulation models for seasonal prediction purposes. We use rainfall forecasts from Predictive Ocean Atmosphere Model for Australia (POAMA) in conjunction with published historical analogue downscaling methods to derive catchment-scale daily-rainfall forecasts. Downscaled seasonal rainfall forecasts, from the aforementioned models, are used as inputs to conceptual rainfall-runoff models, which can be of varying levels of complexity. One month and three month dynamic forecasts at 38 catchments across Australia are now available to registered users of the Extended Hydrological Prediction Services.

Hydrologic Reference Stations provide access to a wealth of information for 221 high-quality streamflow data series. Key site selection criteria included that the gauging station has more than 30 years of records, is regularly rated and is affected by minimal river regulation, land use change or other factors that influence the hydrological data quality. Stakeholder consultation has verified the high quality of these data series and their suitability for assessing long-term variability and trend. Streamflow can be viewed at daily, monthly, seasonal and annual timescales, with accompanying trend analyses and statistical summaries. The Bureau intends to use these sites for assessment of water availability impacts from long-term climate variability. The Hydrologic Reference Stations dataset, as well as a range of graphic products describing long-term trends are available from the Bureau’s website (www.bom.gov.au/water/hrs). 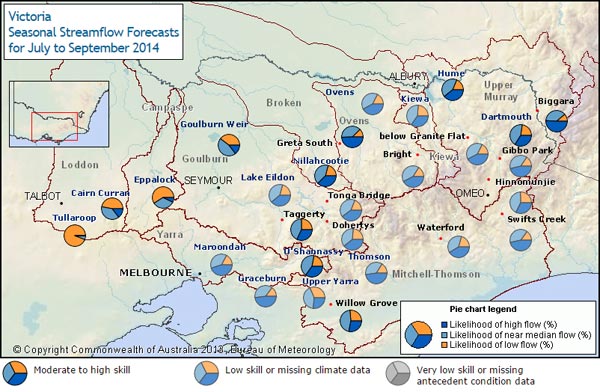 The Bureau is developing a Short-term Streamflow Forecasting Service. It is currently available to registered users, and streamflow forecasts at 39 catchments at sub-daily time scale with a lead time of up to seven days are provided to assist river managers with decision-making. These forecasts are designed for assisting water managers for operating storages, designing environmental watering hydrographs and flood guidance.

The Bureau’s EHP services are already making a difference in water information across Australia, for example, in planning for water restrictions, in timing releases from storages, for environmental watering planning scenarios, etc. Water managers are using these forecasts to various degrees for improved decision-making. Short-term forecasts are now provided to water managers at 69 locations in 39 key water supply catchments, while seasonal forecast service extends to 74 catchments are available to the public and 113 catchments are available through a registered user access. These catchments spread across all jurisdictions and many key water agencies such as the Murray Darling Basin Authority; Melbourne Water and Goulburn Murray Water in Victoria; State Water Corporation and Office of Water in New South Wales; Icon Water in the Australian Capital Territory; Hydro Tasmania and Department of Primary Industries, Parks, Water and Environment in Tasmania; and Department of Water and Water Corporation in Western Australia. Similar water agencies as well as many catchment management authorities in the Murray-Darling Basin also use EHP services on ongoing basis for their decision-making.

The Hydrologic Reference Stations datasets are now used by most research groups in Australia for addressing important questions relating to water availability and its relationship with climate and eco-hydrology. The Hydrologic Reference Stations datasets are also available through the Global Runoff Data Centre, which operates under the auspices of WMO. With increasing pressure on water resources and imbalances between demand and supply, we expect the adoption of EHP services to increase many times over in the years ahead.

Development of the EHP services is a challenge. It requires a cooperative approach, and it involves some of the following steps:

No single agency can achieve this capability on its own and a cooperative partnership model is necessary to achieve successful outcomes. A large team of scientists from the Bureau, the Commonwealth Scientific and Industrial Research Organisation (CSIRO), the Centre for Advanced Weather and Climate Research (CAWCR) and the university sector have worked cooperatively to enable development of the EHP services in Australia.

Ongoing support and advice from water agencies responsible for water regulations, delivery and environmental planning has shaped the EHP of Australia. Future work will focus on the improvements in science, modelling and service delivery systems, meeting data quality assurance and control challenges, expansion of service coverage across Australia, communication of forecast performance and increased adoption of forecast products.

The work on Extended Hydrological Prediction Services is funded through Water Information Program of the Australian Government, and the program is guided by Dasarath Jayasuriya, Graham Hawke and Rob Vertessy. The Extended Hydrological Program is led by Narendra Tuteja, and various program components are managed by Mohammed Bari, Daehyok Shin and Paul Feikema. The program is supported by a passionate team of professionals who wish to make a difference in water information. Q J Wang, David Robertson, George Kuczera, Dmitri Kavetski, Mark Thyer, Tom MacMahon, Ashish Sharma, Neville Garland and David Dreverman have provided critical support to the Bureau of Meteorology.