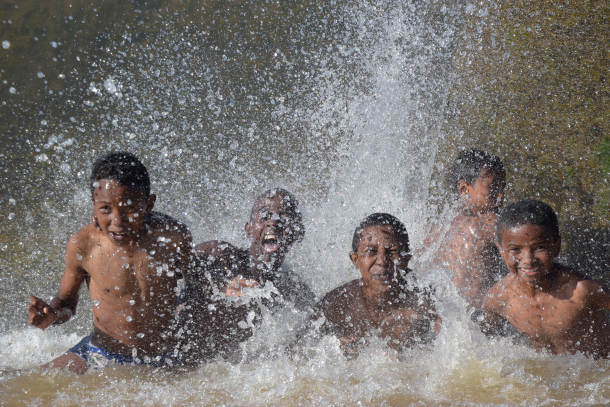 Anniversaries are a good opportunity to reflect upon the past, look at successes and failures, and project into the future. 2018 will mark the 25th anniversary of the World Hydrological Cycle Observing System (WHYCOS), and follows the anniversaries in 2017 of two key water-related developments for WMO:

The 70th anniversary of the first session of the International Meteorological Organization (the predecessor of WMO) Hydrological Commission, which called for close collaboration between meteorological and hydrological services and for regional cooperation in hydrology, especially in the area of standardization and exchange of hydrological observations.

The 40th anniversary of the adoption of the Mar del Plata Action Plan at the UN-Water conference in 1977.

It further marked the 30th anniversary of the 3rd joint WMO/United Nations Educational, Scientific and Cultural Organization conference on hydrology.

These conferences, as well as successive sessions of the WMO Commission for Hydrology, highlighted the significant decline in hydrological observation networks and stressed the importance of addressing this situation.

It is in this context that the original concept for a global hydrological network was proposed in an article by Rodda et al. (1993).[1] This explained that, over previous decades, many countries had reduced financial support for operation and maintenance of hydrological networks, which resulted in serious deterioration of the number and quality of associated observations.

A worrying consequence was the dramatic weakening of knowledge with respect to water resources in many parts of the developing world, especially Africa. At the same time, demand for such resources was increasing rapidly because of economic and demographic development, and pollution was reducing the available quantity of usable water.

The issues were further complicated by the fact that hundreds of river basins and aquifers are shared among two or more countries. So the need for an internationally coordinated action was clear. The 12th World Meteorological Congress in 1995 approved the concept and implementation strategy for WHYCOS. The key principle was to develop a number of networks (HYCOS), on basin, subregional or regional scales, within an overarching framework. Special attention was to be paid to addressing the deficiencies identified. These included the differing procedures for collecting data, variations in quality assurance procedures and standards, unreliable telecommunication systems, and outdated, inadequate or even non-existent information management systems.

Based on the WMO World Weather Watch Programme, the WHYCOS concept had two components: a support component to strengthen cooperative links among participating countries, and a flexible and adaptive operational implementation component.

In 1999, the 13th World Meteorological Congress reviewed implementation of WHYCOS and adopted a governance mechanism (the WHYCOS International Advisory Group) associating the various partners. The advisory board of the Global Hydrometry Support Facility, also known as HydroHub, has now replaced this mechanism. The 13th Congress also adopted Resolution 25 (Cg-XIII) on the exchange of hydrological data and products, the hydrological counterpart to Resolution 40 (Cg-XII) for meteorological data and products.

The first project, implemented from 1997 to 2001, in cooperation with the World Bank, was regional, covering the Mediterranean Basin: Med-HYCOS. So far, 12 projects have been implemented, the most recent being IGAD-HYCOS, which just completed phase 2. These projects cover basins or regions around the world, including Africa, Asia, the Caribbean, the Arctic region and Pacific Islands. They take into account the local context and have different elements. For example, in the case of island States, the focus is on sharing of competencies and expertise, rather than exchange of data, while the sharing of information remains a key priority (and challenge) in other parts of the world.

WHYCOS, together with the WMO Hydrological Observing System (which aims to support preservation of and access to global hydrological data) and the Global Innovation Hub, is now a pillar of HydroHub. This is an integrated initiative to promote and develop further hydrometry activities, by reinforcing human and technical capacities, technical innovation and data exchange. It will ensure better sustainability of hydrological investments.

After 25 years, it is now possible to reflect on the main WHYCOS achievements, but also on some challenges or weaknesses:

Water has been recognized as a fundamental human right, and it has been assigned a dedicated Sustainable Development Goal (SDG-6 - Ensure availability and sustainable management of water and sanitation for all) by UN Members in 2015. Knowledge on the qualitative and quantitative aspects of water cycle are crucial for the achievement of this goal.

One of the main objectives of WHYCOS was to address the deterioration of hydrological observing networks. After 25 years, it is possible to say that without WHYCOS, the situation would be significantly worse. However, there is still a long way to go, and in many countries (including developed ones), the reduction in the density of observation networks is still a serious source of concern.

During the same period, the number of people living in water-stressed regions has grown considerably and is predicted to increase even further. The number and intensity of extreme water events are both increasing, as a result of human-induced climate change and because growing numbers of people are living in vulnerable areas. Therefore, the need for better information on water resources and better management is more critical than ever.

There is no doubt that WMO, in particular through WHYCOS and the development of hydrological services, can make an invaluable contribution to the main hydrological challenges of this century!