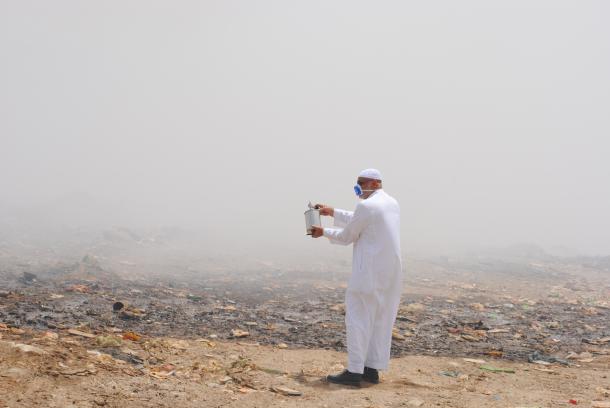 Air pollution is the greatest environmental risk to human health. Outdoor air pollution leads to more than 4 million deaths each year, mostly in developing countries (World Health Organization (WHO), 2019). While air quality has improved in many countries in response to effective emission control strategies, other parts of the world continue to experience severe or deteriorating air quality. Over 90% of the world’s population live in cities that do not meet WHO air quality guidelines, yet the most polluted areas of the world often have the least amount of air quality monitoring or alert systems (WHO, 2016; Kumar et al., 2018). Strategies to improve air quality require detailed knowledge of the components of air pollution and how their emissions evolve over time.

Volatile organic compounds (VOCs) are one component of air pollution containing a complex mix of hundreds of carbon-containing gases (Lewis et al., 2000).Table 1 lists some of the most common and important VOCs in many cities. If concentrations in the atmosphere exceed recommended limits, health risks include exposure to VOCs themselves and to secondary air pollutants formed through chemical reactions between VOCs and other components. For example, VOCs react with nitrogen oxides to form ozone and ultra fine particles, a component of smog that affects human health, vegetation and climate (WMO, 2018).

Measurements and global modelling show that surface ozone levels exceed recommended limits in many parts of the world, especially in Asia (Figure 1). Oxidation of VOCs also leads to formation of secondary organic aerosols, which are an important component of fine particulate matter or PM2.5 (Gentner et al., 2017; Guo et al., 2017). Exposure to PM2.5 is another serious public health concern (WHO, 2013). As the production of ozone and secondary organic aerosol depends upon the relative amounts of their precursor VOCs and nitrogen oxides, emission reduction strategies require a holistic approach that considers the interplay among multiple components of air pollution (Lyu et al., 2016; Zhao et al., 2017). Identifying which reactive VOCs are most likely to form ozone and secondary organic aerosols, then determining which sources are primarily responsible for their emission, is a major objective of air pollution research.

Urban VOC emissions often represent a complex mix of traffic, industry, solvents, waste burning and other sources. Natural VOC emissions from plants and trees also contribute to the urban VOC mix. Each of these sources releases VOCs in a characteristic signature or “fingerprint”. For example, isoprene is a characteristic VOC emitted from broad-leaf trees, while ethene is a combustion product associated with vehicle exhaust (Table 1). Each city therefore has a unique VOC fingerprint that reflects its major sources. This fingerprint evolves over time as levels of VOCs rise or fall in response to changing sources or environmental regulations.

For example, traffic is a major source of urban VOCs. However, vehicle emission control technologies, such as catalytic converters, have reduced VOC levels in many areas of the world, especially in Europe, North America and parts of Asia (Chang et al., 2017). Because of such technology, vehicles in many countries now emit only about 1% of the VOCs compared with 50 years ago (Parrish et al., 2016). As a result, VOC and ozone levels have steadily declined in many industrialized cities in the past 50 years, despite an increase in fuel sales and traffic fleet size (Figure 2). For example, VOC levels have decreased by almost two orders of magnitude in Los Angeles since 1960 in response to early implementation of VOC emission reduction measures (Warneke et al., 2012). Likewise, VOC levels in London have declined rapidly since the 1990s in response to emission reduction strategies (von Schneidemesser et al., 2010)

Another strategy to improve air quality in cities is fuel substitution. For example, many cities have shifted their public transport systems from diesel-fuelled buses and taxis to cleaner fuels such as liquefied petroleum gas (LPG) or compressed natural gas (CNG), or to options that do not contain fossil fuels such as electric. While diesel fuels emit heavier VOCs such as octane and toluene, cleaner fuels comprise lighter hydrocarbons such as propane and butane in the case of LPG, and methane and ethane in the case of CNG (Kado et al., 2005; Guo et al., 2011; Gentner et al., 2017). Therefore, fuel substitution can shift a city’s VOC fingerprint towards lighter hydrocarbons, which are less reactive and therefore slower to form ozone. For example, the VOC fingerprint of Hong Kong, China, has shifted from toluene-rich to butane-rich as diesel was replaced by LPG fuel in taxis and light buses, and as toluene levels were limited in dozens of solvent products (Guo et al., 2017; Lyu et al., 2017).

As VOC emissions from traffic sources have decreased in many cities, other VOC sources are emerging in relative importance. Volatile chemical products – such as pesticides, coatings and inks, cleaning agents and personal care products – are now estimated to comprise half the fossil fuel VOC emissions in the United States of America and Europe (McDonald et al., 2018). Markers for these products include VOCs such as ethanol, acetone and toluene, and the emitted VOCs can be important precursors to secondary organic aerosols. Therefore, in cities with effective vehicle emission controls, it is becoming increasingly important to understand the role of non-traffic VOC sources on ozone and secondary organic aerosol formation.

While some parts of the world have successfully reduced their VOC emissions, numerous challenges remain. Many countries are still in the early stages of establishing air quality standards and effective regulatory frameworks. In addition, large areas of the globe – many of which experience severe ozone and particulate pollution – are still understudied. Robust air quality monitoring programmes are essential for understanding each city’s VOC fingerprint and its evolution over time.

While measurement capability is established, limited “snap-shot” field studies can provide valuable information to guide policy. For example, a short field campaign found that air in Lahore, Pakistan, one of the world’s most polluted cities, was richest in ethene and acetylene, which are characteristic tracers of vehicle exhaust (Barletta et al., 2017). By contrast, air in Mecca, Saudi Arabia, had unexpectedly high levels of iso-pentane, a tracer of gasoline evaporation, in addition to vehicle exhaust tracers (Simpson et al., 2014). Therefore, as well as establishing vehicle emission standards in Mecca, simple technology to reduce gasoline evaporation has also been recommended, such as adding vapour recovery to fuel pump hoses to reduce VOC emissions and exposure to fumes while vehicles are being refuelled. In this way, emission reduction strategies can be tailored to each city according to its unique VOC fingerprint.

Other regions with established air quality monitoring programmes have found a complex interplay between rising VOC emissions in some sectors and declining emissions in others.

For example, there has been a persistent growth of VOC emissions in China since 1990, despite declining emissions from the residential and transport sectors since 2005 (Li et al., 2019). The increase is associated with growth from industry and solvent use, though this growth has been slowed by effective control measures in the residential and transport sectors, especially after China’s Clean Air Action Plan was implemented in 2013. China already has extensive VOC monitoring in the major source regions – including the North China Plain, the Yangtze River Delta and the Pearl River Delta – which provides a solid foundation for evaluating the evolution of Chinese VOC emissions (Guo et al., 2017).

Even when cities succeed in lowering their pollution levels and improving their air quality, they can still reach non-attainment for ozone and other pollutants. Transboundary transport is an additional confounding issue in some regions, for example, when neighbouring areas have different levels of pollution or emission control. The result is often a complex mix of local and regional VOC source contributions that vary depending on the weather, for example changing wind direction. Unravelling the relative contributions of local and regional pollution sources is another challenge of air quality research.

Severe air pollution is an environmental and human health concern in cities globally. Pollution reduction is possible with existing technologies. Countries with emerging air quality standards can draw upon the successes and challenges of other regions. Vehicle emission control technology and the switch to cleaner fuels have been successful in reducing VOC emissions from traffic in many cities, despite an increasing fleet size. As emissions from transport-related sources are reduced, other VOC emissions may become more apparent, such as VOCs associated with solvents or other volatile chemical products. Simultaneous programmes to target multiple VOC sources may be appropriate, such as regulations aimed at traffic, solvents or other sources.

To succeed at reducing ozone, all VOC mitigation efforts should consider the complex interplay between VOCs, nitrogen oxides and ozone. In addition to emission reduction measures, robust air quality monitoring is an essential component of air pollution management. Long-term monitoring of common individual VOCs is recommended for tracking changes in each city’s VOC fingerprint in response to emission control strategies. In the meantime, short-term surveys can provide initial guidance as to which VOCs are most responsible for ozone and secondary organic aerosol formation.

———, 2016: Ambient Air Pollution: A Global Assessment of Exposure and Burden of Disease. Geneva.