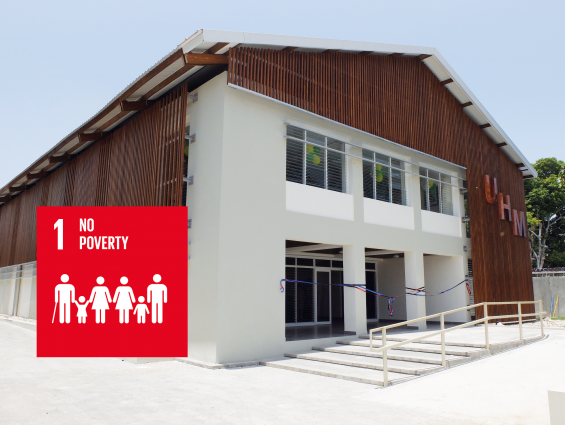 Haiti, the poorest country in the Western Hemisphere, is extremely vulnerable to natural disasters. Situated on the western third of the island of Hispaniola, the country regularly experiences major earthquakes, hurricanes, tropical storms, droughts and flooding events. The impact of these has been further aggravated by deforestation that has left the urban and rural areas where the poorest segment of the population live exposed to landslides following heavy rainfall. Each successive disaster takes a toll on the Haitian economy and further hinders its sustainable development.  The development of impact-based multi-hazard early warning systems is a priority for Haiti to achieve Sustainable Development Goal One (SDG-1) “Reducing poverty in all its forms everywhere.”

In 2010, Haiti was struck by a catastrophic magnitude 7.0 Mw earthquake. The epicentre was 25 kilometres from the capital, Port-au-Prince. The earthquake and its aftershocks caused well over 230 000 deaths and displaced 1.5 million people. Much of the island’s infrastructure was severely damage, including that of the Haitian National Meteorological Centre (CNM). In a country so vulnerable to extreme weather and climate events, there was an urgent need to restore forecasting capabilities in order to reduce the vulnerability of the Haitian population.

A first step was the launch, in June 2010 – six months after the earthquake and just in time for the hurricane season (June to December) – of a website (www.meteo-haiti.gouv.ht) to disseminate information and warnings to United Nations agencies, non-governmental organizations (NGOs), disaster affected communities and the media. The re-establishment of meteorological services in Haiti in such a short time occurred thanks to collaboration between WMO Members including Canada, Cuba, the Dominican Republic, France (MeteoFrance from its office in Martinique), Japan, the United Kingdom and the United States of America.

Further to that effort, WMO partnered with Environment and Climate Change Canada (ECCC) to develop the project “Climate Services to Reduce Vulnerability in Haiti.” Its implementation started in 2012 and the final pieces are now falling into place with the inauguration of the new CNM headquarters, training programmes for CNM forecasters, and the installation of technical equipment such as forecaster workstations, Internet, communications and related technology. This project is implemented in close coordination with a World Bank project, which aims to further strengthen the hydrometeorological services of Haiti.

WMO established a project office in Haiti in 2012 to support implementation of the project and to coordinate with Ministry of Agriculture, Natural Resources and Rural Development, CNM, the National Service for Water Resources (SNRE), the National Office for Civil Aviation as well as the World Bank project and other project partners. The United Nations Office for Project Services (UNOPS) was contracted to oversee the building of the new headquarters building.

Following the earthquake CNM was re-located to temporary housing in shipping containers. Then, as the 2014 hurricane season was approaching, WMO and ECCC delivered prefabricated offices to replace the ageing containers and allow staff to operate more effectively. In November 2015, the first stone was laid in the new CNM headquarters.

At about the same time, Haiti also undertook structural reforms to unify its meteorological and hydrological services, which would share the new building. CNM and SNRE would join forces as the new HydroMeteorological Unit (UHM) under the Ministry of Agriculture, Natural Resources and Rural Development.

The Haitian Minister of Agriculture Carmel André Belliard, WMO Secretary-General Petteri Taalas and Canadian Ambassador Paula Caldwell inaugurated the new UHM building in a ribbon-cutting ceremony on 26 May 2017. “Canada is proud to see the results of the $ 6.5 million [CAD] contribution to the World Meteorological Organization (WMO) to rebuild Haiti’s Meteorological and Hydrological Centre and develop a modern weather and climate warning system for Haiti,” stated Ambassador Caldwell. The building can withstand earthquakes and hurricanes, and the solar panels and generator will be able to provide electricity for continued operations for up to three days if there is a power outage.

A network of automatic stations installed in 2016, with the collaboration of INSMET (Cuba), allows UHM to consult different meteorological parameters in real-time. Equipment to generate and communicate weather forecasts and alerts will be installed before the end of the year. UHM training, including a refresher course on aeronautical assistance required by the International Civil Aviation Organization, will be carried out with the support of Meteo-France.

As part of the project, UHM staff have undergone extensive training – on the flash-flood guidance system, marine meteorology, hydrology, climatology aeronautical assistance, calibration and maintenance and language. The training component of the project has been strongly supported by Meteo-France, the Caribbean Institute for Hydrology and Meteorology, the Cuban National Institute for Meteorology (INSMET) and the Regional Specialized Meteorological Centre in Miami.

Another important step towards operational services was taken in Geneva on 29 September, when the agreement for a Technical Assistance Package (TAP) for the UHM was signed between WMO and Météo France International (MFI) as a result of an international tender process. This assistance package will provide a turn-key system to UHM with much needed technical equipment, including forecasting workstations and a pilot briefing system, and related training to increase forecasting capabilities, improve disaster risk reduction efforts, support aviation meteorology and improve the observations network.

Down the line, implementation of the Global Framework for Climate Services in Haiti will strengthen the provision and use of climate information to boost food security, strengthen water management, reduce disaster risk, increase energy production and improve health security. With a fully operational hydro-meteorological service with capacity on disaster risk reduction and early warning systems, UHM will contribute, in collaboration with the National Disaster Management Agency, to reducing the number of deaths, missing persons and persons affected by extreme events, and contribute to sustainable economic development in Haiti.

Climate change and rising sea level will increase Haiti’s vulnerability to natural phenomena.  The country escaped the worst of the 2017 hurricane season, however, it is still recovering from Hurricane Matthew, a category 5 tropical cyclone that made landfall on 4 October 2016. Matthew killed more than 500 people and cost Haiti around one-third of its Gross Domestic Product (GDP). In a country where 60% of the population lives below the poverty line, the impact was devastating.

During his visit to Haiti for the inauguration, Secretary General Taalas underlined the importance of the meteorological services and early warning systems during such extreme event:  “Forecasters accurately predicted the approach of the hurricane and so helped prevent the death toll reaching the thousands. But the tragedy underscores the need to vastly improve early warning systems.”

Through improving the forecasting capabilities of UHM, the project partners are working to reduce the socio-economic losses resulting from extreme hydrometeorological events and thus contributing to SDG1. WMO will remain committed to the Haitian hydro-meteorological services in the future, providing support to the UHM beyond the scope of the project. An investment in early warning services will decrease the human and economic losses of natural hazards and prepare the Haitian population for future hurricanes and tropical storms.